In the first three games of the season, Davis had 13 receptions for 169 yards and four touchdowns.

However, in five of six outings since then, Davis has been a complete non-factor in the 49ers passing game. Beside his stat-padding day versus the Buffalo Bills, Davis has only accumulated 11 catches for 129 yards and no scores in 5 games - averaging a measly 25.8 yards per outing.

In two of San Francisco's non-wins this season, Davis was limited to less than 40 yards and no scores.

In the team's most recent outing versus the St. Louis Rams, Davis averaged less than 10.0 yards per catch for the first time all season. 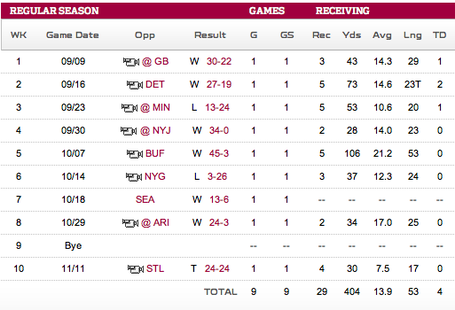 Now, it's well known that when Davis disappears on the stat sheets like this, he's usually contributing heavily in the run game - which is true. For as good a weapon as he is in the passing game, the 49ers star tight end brings just as much value to the running game.

Since he is such an effective player when it comes to blocking, it's hard to complain.

But when the team's offense is clearly lacking explosiveness and the No. 1 playmaker in the passing attack has been an offensive lineman for the past 5 weeks, it's easy to become distressed.

Davis should have had a monstrous game against the Rams on Sunday, but instead had his worst game since he was held without a catch in Week 7 against the Seahawks. It's hard to pinpoint why Davis has not been utilized in the offense recently, but it's affected the performance of the team.

San Francisco is at it's best on offense when they are feeding the ball to their playmakers, and making the defense guard everyone. The team's main focus should be a balanced attack where the running backs, tight ends and wide receivers are all involved.

The offensive creativity has been lacking over the past few weeks, and it's hampered this team's ability to control football games. If Vernon Davis is not contributing in the passing game, the Niners cannot reach their full potential.