We take a look at Tim Ryan's comments regarding Aldon Smith's sacks coming thanks to Justin Smith engaging in illegal holding.

Share All sharing options for: Aldon Smith and Justin Smith: Tim Ryan has an exaggerated point

Sunday afternoon, Aldon Smith secured two sacks of Rams quarterback Sam Bradford, increasing his season sack total to 9.5. Smith now trails J.J. Watt (10.5) and Von Miller (10.0) and is on pace for a little over 16 sacks. He is making great strides in his run defense while still needing to work on his pass coverage skills, but we're here to focus on his pass rush skills today.

During Sunday's game, Aldon sacked Bradford at the end of the second quarter, and again at the end of overtime. After Aldon secured his first sack, the replay showed Justin Smith being double-teamed, and getting a firm grasp on the interior offensive lineman. On the replay, analyst Tim Ryan made a comment about how 80% of Aldon Smith's sacks come when Justin Smith is able to grab hold of an offensive lineman to open up space. That of course is an illegal maneuver, and something the New York Giants brought up before their Week 6 matchup against the 49ers.

I decided to take a look back because claiming 80% of Aldon's sacks coming on Justin holds just seems like an exaggeration on its face. I looked up all of Aldon's 2012 sacks on NFL Rewind and found some interesting info. We'll look first at the general holding claim, breaking down several specifics. After the screenshots, I have a few thoughts on Justin Smith's role in the defense and how it helps Aldon Smith.

First, let's take a look at the sack in question where Ryan made the comment. 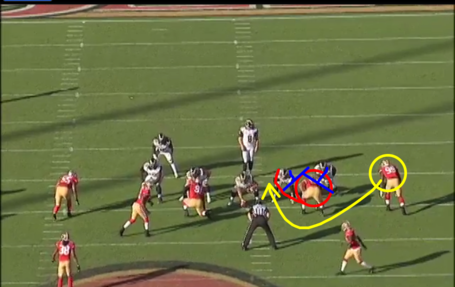 The 49ers found a good deal of success with this stunt sending Aldon Smith (yellow circle) in over the center/guard. The left guard and left tackle both occupy Justin Smith (red circle), which could potentially open some space for Aldon. 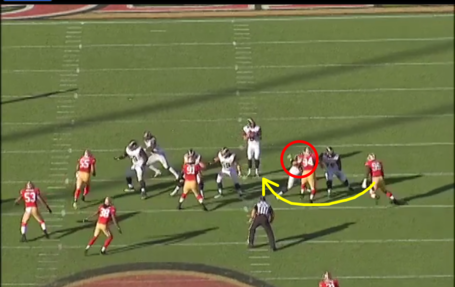 In this second picture, you'll notice the double team on Justin and the center moving to double Ray McDonald, opening a big hole for Justin Smith. This picture does not show it perfectly, but Justin has placed his left arm under the right arm of the left guard. You can sort of make it out, but if you can't quite see it, take my word for it. It's holding, and I am a little surprised the ref doesn't see it. My guess is he might be looking more toward the center, but who knows. Either way, Aldon burst through that hole and got the easy sack.

Tim Ryan was correct in that there was holding and it opened a hole for Aldon. However, after reviewing previous sacks this season, three of the sacks come on plays in which Aldon and Justin were lined up on opposite ends of the line and did not end up anywhere near each other. A fourth sack (his first of the year of Aaron Rodgers) came on a play action fake in which Aldon did not bite on the fake and instead pursued a bootlegging Rodgers. So, right off the bat, that reduces potential holding to no more than 60% of Aldon Smith sacks.

I decided to grab some screen shots of several Aldon Smith sacks where he was lined up next to Justin Smith. 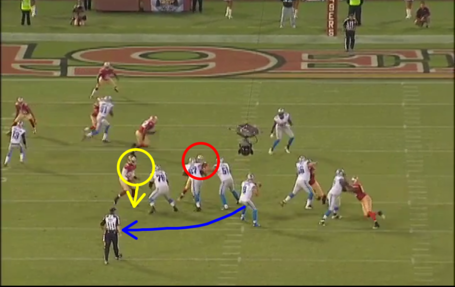 In Week 2, Aldon Smith accrued 1 1/2 sacks of Lions QB Matthew Stafford. The full sack came with the two lined up on opposite ends of the 49ers dime defense. The 1/2 sack came on the play pictured above. Justin (red circle) is occupied by two defenders, while Aldon (yellow) is coming in at the left tackle from a stand-up position. He wasn't in a straight dead rush for the QB, but rather is eyeing him and trying to give a shimmy to the tackle. Stafford couldn't find an open receiver and so he rolled out to his left. Aldon cut to the outside and grabbed the sack. In this play, it actually looked like Justin was the one being held, but it wasn't particularly crazy. 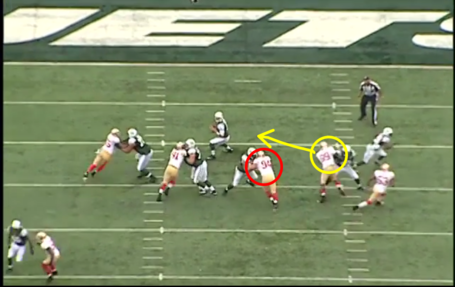 Against the Jets, Aldon Smith grabbed a pair of sacks with the second one coming in the fourth quarter. These were each straight up one-on-one battles without holding. It was pretty simple really. 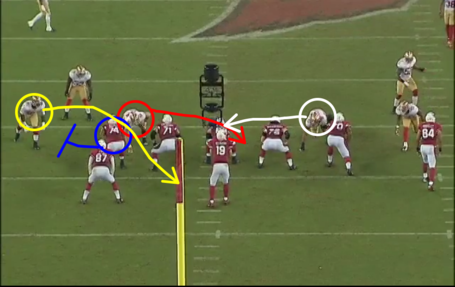 Against the Cardinals, Aldon grabbed a pair of sacks, both of which saw him lined up next to Justin. In the picture above, Justin (red) and Ray McDonald (white) each stunted in. It appeared they were looking to open up the outside for Aldon Smith (yellow) and Ahmad Brooks (opposite end) to come in off the edges. In this case, the Cardinals left tackle (blue - D'Anthony Batiste) went to engage Aldon one-on-one. Given how this game went, it should surprise nobody that Aldon blew past him.

The key was the double stunt engaging the center and two guards. There was no holding on the play, but Justin Smith and Ray McDonald sufficiently engaged the line to open up simple one-on-one battles. Give Aldon Smith a one-on-one battle, and he will win it quite frequently. 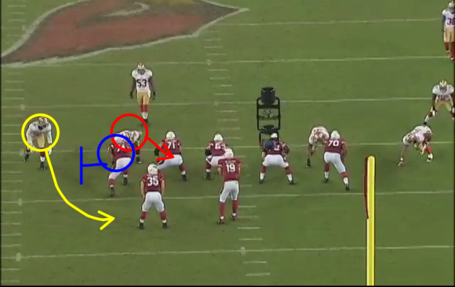 This second sack saw Aldon come around the outside, while Justin went inside on Bobby Massie. Batiste (blue) kicked out trying to stop Aldon, and this time received help from fullback Anthony Sherman, as seen below. 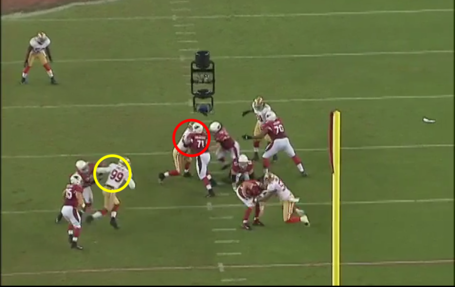 As this picture shows, Aldon Smith was doubled by Batiste and Sherman, and Batiste also had a hand all over Aldon's left arm. In the picture, you see Aldon's left arm trailing him. That happens when somebody is holding on to you. But nonetheless, Aldon got through the double team. In this particular picture you see Ahmad Brooks with a hand on John Skelton. Although Skelton would escape Brooks, it slowed him down enough that Aldon could get to him.

It is also worth nothing that Massie is holding Justin Smith in this play as the Cardinals attempt to double-team him. Even though Justin certainly has had his share of holding penalties, maybe opposing offensive coordinators should say something about their offensive linemen grabbing and holding with impunity. There is quite a bit of holding on any given play, so let's not play dumb like the offensive line is pure as the driven snow.

These pictures don't tell the whole story, but in each of these instances, if there was any defensive holding, it seems minimal at best. If I were in Ryan's position in the broadcast booth, I think the much more pertinent argument is how important Justin Smith is without even needing to grab hold of offensive linemen.

There are plenty of times Aldon Smith is able to use his athleticism to beat offensive linemen or double teams. However, there are als numerous instances where Justin is able to draw away defenders and open up key one-on-one battles for Aldon. This is not a shocking statement by any stretch, but I think declaring that Aldon gets 80% because Justin Smith is engaging in illegal holds is a bit disingenuous.