The All-22 on Colin Kaepernick

We take a look at the coach's film from Sunday's draw against the Rams - specifically, two plays of quarterback Colin Kaepernick.

Share All sharing options for: The All-22 on Colin Kaepernick

Hey there, everybody. For the rest of the season, I will be helping out by adding some written contributions to Niners Nation. My hope is to do a little bit of everything: from stats to history to random thoughts on the league, etc.

The most exciting thing, however, is I hope to bring as much All-22 49ers coverage as my free time can muster (and I currently have a lot of free time).

For today's post, I have two Colin Kaepernick plays from Sunday's contest with the Rams. There were several other throws I wanted to study, but the task was more time-consuming than I anticipated. As I get more experience with it, I should presumably get quicker, too; and that will allow for more content.

This means, if you have any specific plays, players, or concepts you want to see explored through the lens of the coach's film, let me know in this thread, or in any other thread I happen to make, or even if you see me around NN in general. I'll be happy to oblige because it is my goal to get us Faithful more All-22 articles than any other SBNation site.

Ambitious, I know, but I've been drooling over the All-22 for years; and now we have finally been granted access by our NFL Lords and the Great Czar Commissioner Goodell to the Forbidden Fruit. Don't you just feel so privileged?

The first play we're going to look at was also conveniently enough Kaep's first play of the game - one that, at the time, without knowing the extent of Alex's injury, could have been the beginning of the Kaepernick Era.

It might be a bit rough of us to criticize it - his heart was probably racing - but it does provide a great example of several things. 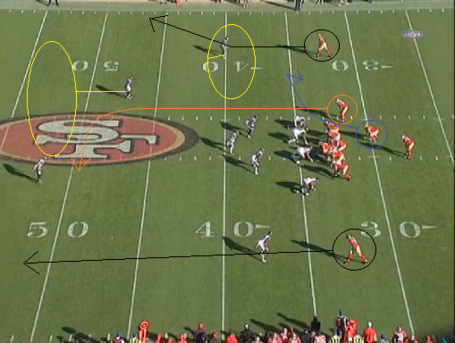 Vernon Davis (top black) split wide out of a heavy right-side formation, leaving a hole between Delanie Walker (orange) and the rest of the line.

The DB (yellow) nearest Vernon followed him, but he is not playing man-to-man. He is playing zone coverage in roughly the area circled. Similarly, the safety (also yellow) over the top is going to step back as a safety net.

Delanie is going to run a very deep in route about 15 yards up field from scrimmage. In the backfield, Bruuuuuuuuuuuuuuuce Miller (bluuuuuuuuuue) is going to look for an opportunity to chip a pass rusher, and then he will float out as a receiver.

Kaepernick does a quick drop, and fakes the hand off to Gore. He reaches the top of his drop, looks up, and sees this: 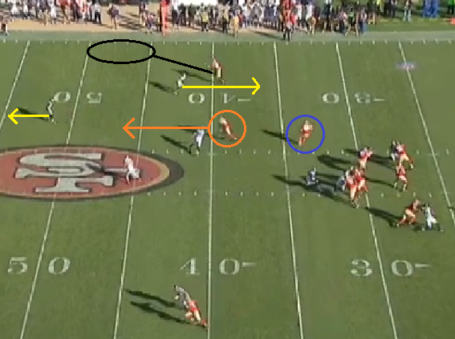 His very first read (as far as I can tell) is Vernon Davis (top black), and he's open. It might not look like it to our eyes, but the DB nearest Vernon is in no position to cover the corner route. He's already beat. He is leaning forward and Vernon is 1/10th of a second away from blowing by him.

The safety over the top is leaning back and is also not in a position to cover Vernon. If Kaepernick steps into the throw right now it's a completion guaranteeing at least a first down, and perhaps much more than that.

So what stopped him? 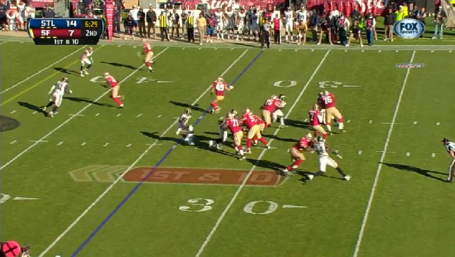 Well, here we have a photo of that exact same moment. Oddly enough, this is from the live telecast, but it gives us a pretty good view of the play.

The pocket is quite clean. What's concerning Kaepernick most is probably the man that is almost getting by #75, Alex Boone; but Boone is in a good position to drive him down and outside, away from the pocket. If Kaepernick steps into the throw right at this moment, into the space right in front of him, then the man on Boone is of no concern. By the time he steps into it Vernon will already be past his man, as well.

Instead, he hesitates on the throw, and comes back inside to look for Delanie - but it's too late. The space in front of him collapses, and Kaepernick floods the pocket and runs left.

As it happens, there is no one out there, and Kaepernick uses his speed and goofy ostrich legs to pick up a first down uninterrupted.

But that brings us to another point of concern: 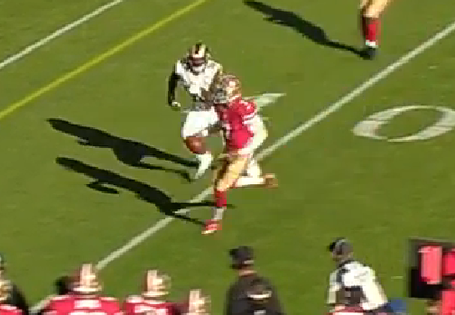 The way Colin carries the ball. Every time he escapes the pocket, he holds the ball like it's a purse with a handle popping from the top and he's on a Sunday morning stroll. The defender here is not in the best position to tackle Kaep, or even swat at the ball, but he's close enough that #7 should at the very least have it already tucked.

This was something many of us noticed as a habitual occurrence throughout the game. Literally every piece of film on Kaepernick runs shows the same loose handling of the ball.

What concerns me most is that this is not a new issue and it should have already been addressed and fixed. Kaep did, after all, lose a fumble later in the game, and it could have had us leaving Candlestick with our sister's love still unrequited.

Perhaps the throw above to Vernon is one that Alex makes. After all, the two have consistently shown the greatest chemistry of any offensive connection (though Crabtree is beginning to make a lot of noise in that department).

Part of me thinks that might have a lot to do with how many completions Kaepernick was instead making to Moss, Manningham, or Williams. For example, Exhibit B: 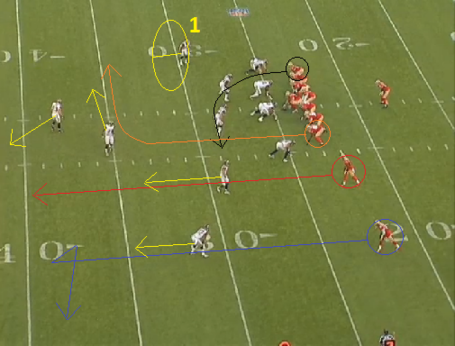 Manningham (blue) is going to run a deep comeback and then out. Crabtree (red) is running a go route. Delanie (orange) is going to go run a really awkward in route about 10 yards up-field (the next post I make might just be on Walker's route running, because it's not very sharp. He advertised this route the entire way. Made it very easy to defend).

Lastly, Vernon (black) is simply cutting across the middle.

Normally, you might expect one of the inside linebackers to pick Vernon up, but the Rams are on a full blitz. All six white jerseys near the line are going to attack, leaving tons of space in the middle.

The yellow DB who is circled and labeled, "1", ends up responsible for Davis - but he starts the play soft and backs up as if he is playing zone. Once Vernon darts inside, he is waaaaay late to respond. As Kaepernick finishes his drop and looks up to pass, he sees this: 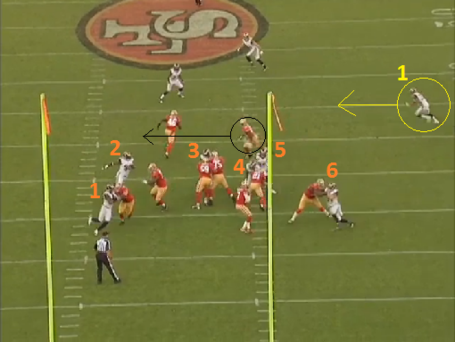 Notice the yellow "1" is not in any position to make a play on Davis. At this moment right now, where Kaepernick clearly knows the blitz is on, he should dump the ball right to Vernon.

The inside linebackers are converging straight down, making for a six-man rush that leaves, again, tons of space in the middle. The line does a good job of picking up the blitz, with Gore helping out right in front of Kaep - but it cannot last forever. The pass needed to be made immediately.

Especially considering Kaepernick's other options at that moment: 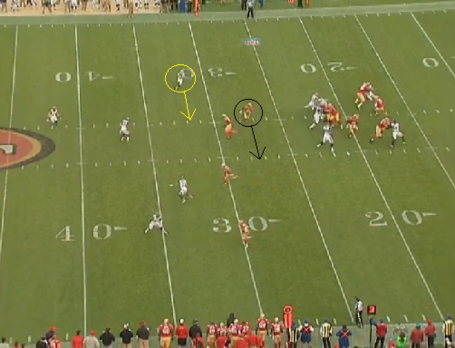 Notice everyone is covered over the top, and notice Vernon running into a spacious area in front of him, with no defenders in sight.

Instead, Kaepernick holds onto the ball. Then something happens that has several funny bits to it. 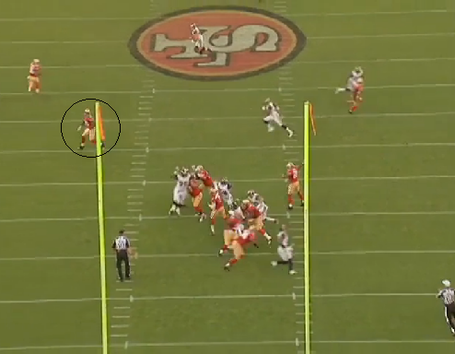 Funny bit #1. Rather than make the easy play and let Vernon run on into space, Kaep releases the ball right as this picture was snapped, with a gang of Rams' defenders about to converge on top of him. Naturally, after he releases the ball, they smother him in a sea of white.

Funny bit #2. Vernon Davis (black) is still wide open. But the throw still does not go to him. In fact, it darts right past him.

Funny bit #3. The throw instead goes to Manningham, who was running the most convoluted, time-consuming route of the entire play. Had it not been for the fantastic blitz pick-up, that route never would have had time to develop. As it stood, it barely had enough time.

Kaepernick doesn't get to step all the way into the throw, but he still lazers it into Manningham near the sidelines.

A quarterback with less arm strength throws a pick there. But a more experienced quarterback would have already put the ball in Vernon's hands.

Some of you might disagree that Alex makes the first throw - though the second one Alex definitely would have made. Still, I decided to stick with these two plays because I think they sum up Kaepernick very well.

#7 is green, but a natural play-maker.

He had Vernon open on the first play and could have made the deep throw that would have resulted in a potentially huge gain. Instead, he hesitates, the pocket collapses, and he lets his athleticism take over for a 10 yard scramble and a first down.

On the second play, he had Davis wide open. He did not read the blitz, first of all; and even once it came, did not make the easy, smart throw to where the blitz came from: the middle of the field. However, he hung in the pocket, got protection, and then darted a throw to Manningham. It still resulted in a first down.

So is Kaepernick ready to start tomorrow? Is he well on his way to becoming a really good quarterback? Is he our eventual starter? Not sure to any of those questions. But I do think there is tons of potential there. Even his "bad" plays above still resulted in positive gains.