We take a look at some of the tweets Brandon Jacobs has sent out in recent days, and how he might be feeling about his time with the 49ers.

Share All sharing options for: Will Brandon Jacobs pull a Costanza anytime soon?

Yesterday afternoon, Brandon Jacobs sent out a string of tweets that got people in a bit of a huff. He made some comments about never working in place where you hate your boss and then asked "Have you ever been in a spot and you wonder why are you there".

It turns out Jacobs's brother was laid off at his job, and he also knows two other people in a similar situation. As Jacobs said, football is not everything in his life, and that is perfectly reasonable. Things aren't great for a lot of people right now, so it should be no surprise that he has family dealing with situations.

While that is understandable and reasonable, previous tweets would indicate a man who is not particular happy with his current situation. This is not all that surprising, but here were a couple of exchanges he had with people a couple days ago: 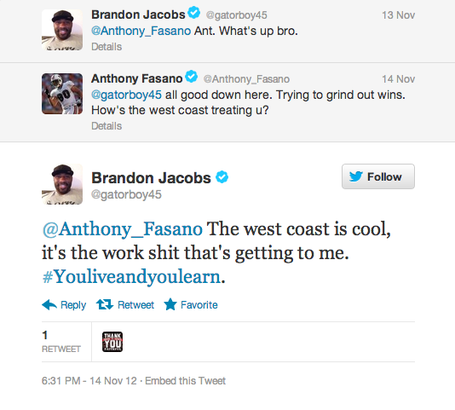 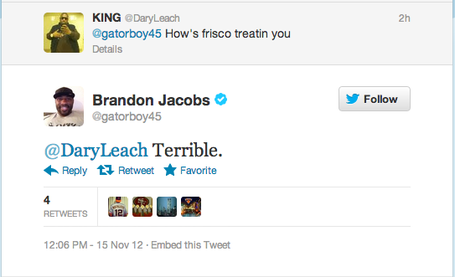 First off, we will not get into the use of Frisco.

Brandon Jacobs may put on a happy face with the media at times, but this is a man who is not happy at work. I won't say it's simply a case of "he made his bed, now he has to sleep in it" because we don't really know the full details of the situation. He just is unhappy and that is not a good thing for team morale. LaMichael James retweeted one of the workplace tweets, but he also retweeted Maiocco's tweet about Jacobs saying it was not 49ers-related, so take that how you will.

People will make the assumptions they want to make. I could be off-base with this, but Brandon Jacobs just doesn't seem happy. I don't think he'll go full-on Costanza trying to get the Yankees to fire him, but it's still at least a little amusing to consider. This is probably one of my all-time favorite episodes of Seinfeld.