Share All sharing options for: All-22: The Rams Run Wild

Were you craving more coach's film? Me too. We must be twins. Or maybe we just like football. Either way, we are going to take a look at various plays from the first quarter of the Rams game.

It was an ugly quarter on both sides of the ball. St. Louis ran 13 plays for 159 yards and two touchdowns in their first two drives, eating up just over half the quarter. Meanwhile, the 49ers' first two drives totaled 10 plays, 37 yards, and two punts.

Against a team like the Rams, we managed to stay in the game despite an early deficit. Alex Smith led a touchdown drive on San Francisco's third possession of the day, and the defense was finally settling in after a lacklustre start. The second quarter looked like it was going to go a lot better for us.

Then Smith was taken out due to the concussion and Colin Kaepernick came in and had an understandably rough first few drives. Even still - despite playing with a back-up quarterback, despite fumbling three times, and despite the Rams successfully faking two punts - the 49ers managed a draw.

Against most other teams in the league, that is a recipe for disaster. We got lucky. So what exactly went wrong in that first quarter? Let's take a look.

We'll start on offense, with two plays from the 49ers' first drive, which ended in a three and out.

"The volume and variety... of the running plays... it is impressive to watch [the 49ers]."

So everything that happens from this point forward is his fault. 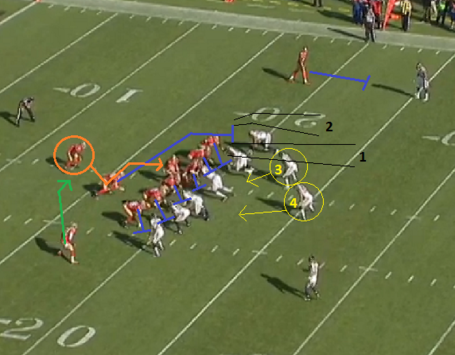 Manningham (green) came in motion from the other side of the formation and lines up at the bottom of the screen. As the ball is hiked, he begins to motion backwards. He'll run a sweep. There are probably times where this play goes to Manningham; but as it stands now, #82's job is to help sell that the play is instead going where he came from.

Gore (orange) is going to run a counter. This further sells that the play is indeed going to Manningham's side of the play. He'll dart to his right and receive the hand off from Alex.

The line is going to block all their men down screen, also towards Manningham. Everything about the play is meant to make the linebackers (yellow 3 and 4) converge towards the center. They have eight men in the box, and we will only have seven men blocking; so the play is designed to potentially leave 3 and 4 unblocked by instead deceiving them. It's okay, therefore, that they have the numbers advantage.

The cool part comes from Bruce Miller, who is lined up in front of Gore. It's hard to tell in this picture, but Bruce is very low to the ground. He's going to do his best to hide behind all the action at the line and pull to his left, where the run play is actually going.

Bruce will handle the outside linebacker.

All of this will open up two lanes for Gore. Lane #1 will open between the last linemen and where Bruce pulls. Lane #2 will open up on the outside, in case LB 3 for the Rams is on top of the first lane. 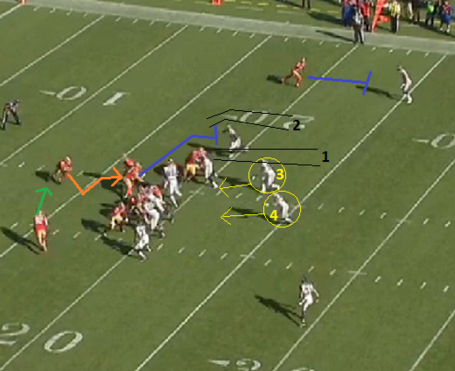 A second later, Gore is moving in for the hand-off and Bruce is right in front of Alex Smith, pulling left.

As you can see, the play appears to be working beautifully. LB 3 and 4 are buying into the center, and the entire line has successfully blocked their guys down down down.

It looks, at this point, like Lane #1 will be open. 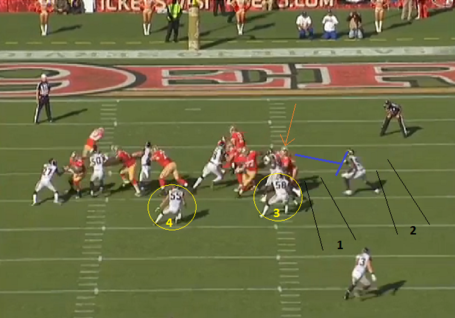 The hand off is just taking place. Bruce is hard to see here, so I pointed him out with an orange arrow. He's about to follow the blue line and finish his pull.

Joe Staley (the reason we cannot see Miller), has done a great job opening up space behind him. Linebackers 3 and 4 are beginning to pick up on where the play is going, as you can tell by where they are leaning. Still, lanes 1 and 2 are open.

Unfortunately, however, right in the very center of the photo, Jonathan Goodwin got no push on his man. #98 for the Rams blows up the play. He's already in the back-field just as Gore is receiving the hand-off. 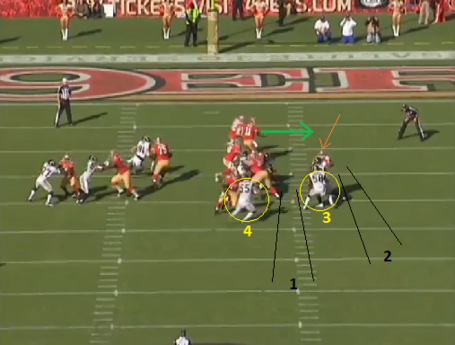 #98 ends up wrapping Gore up as this picture is taken. Otherwise, he'd be firmly behind Bruce Miller (orange arrow), who has not only managed to block his man very well, but he is backing his dude up into LB 3, who was a little over-aggressive.

If the play had not been blown up, Gore would be in prime position to choose a lane and pick up at least five yards.

Instead, it amounts to a one yard loss and a bad start to the game. 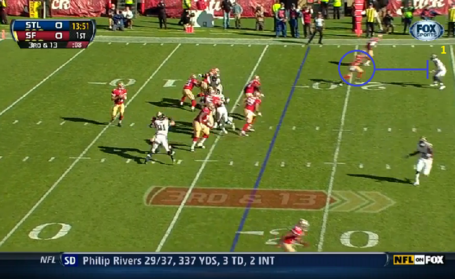 After an Alex Smith sack set up 3rd and 13, the 49ers turned to the ever-popular screen play. The screen was the call all the way; and though Alex is looking down-field as if to throw, it's just part of the gimmick.

Our o-line does their best 2011 impersonation, allowing the Rams' front four to barge through with little protest. They do a fantastic job of not doing anything. I was a little disappointed in Alex Boone, though, who manages to block his guy for just an extra split second longer than everyone else. Clearly he learned nothing from Chilo.

A couple seconds later, after Gore receives the pass, we see this: 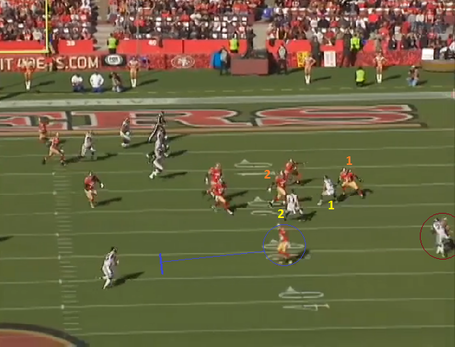 You might notice there are suddenly two guys behind Kyle Williams (blue).

That's because K-Dub, instead of blocking his DB (yellow, 1), runs right by him. He then also does nothing to even get anywhere near the safety (yellow, 2). From now on, we'll refer to any player numbered yellow as, "Kyle's missed block", with the corresponding number.

So here we have Williams, instead, located about 15 yards up field, past the first down marker. I guess he's gonna go way to his right and try to block the other safety. God speed.

On the side, circled in red, we have Mario Manningham, who actually decided to show up this play (maybe they know how to run screens in New York?). 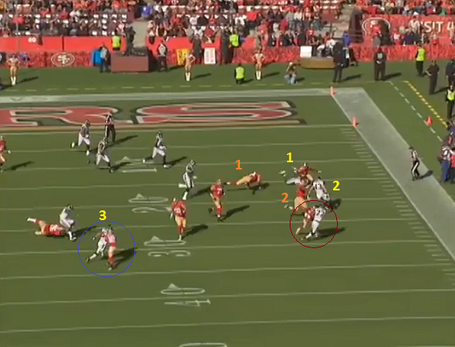 A second later, Manningham (red circle) is still right on top of his man, hammering away with the block. Serious props to him as he provided more than enough time for Gore to pick up a first down, if the play had been properly executed.

At the bottom left, circled in blue, is K-Dub introducing us to Kyle's missed block #3.

In the meantime, Manningham successfully forces his man to the outside, near the sidelines, away from where he presumes Gore's running lane is.

Which brings us to our next picture. One that sums up how the Rams came to play in that first quarter, and San Francisco did not. 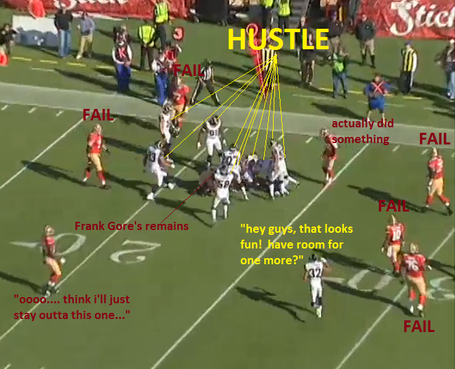 Side Note: Anthony Davis, #76, did not actually have much of an opportunity to block anyone. Out of fairness, then, I should mention that the "FAIL" beneath his name was only written for comedic purposes.

Screens are some of the most potent plays in the game. They are sneaky and can kill a defense. They can pick you up a 3rd and long and make a defense hate itself; they can get you huge gains out of nowhere.

Or maybe I just think these things because that's how screens always work against us.

Either way, there must be some kind of secret to screens - and the 49ers are not yet privy to it.

After the Niner punt, Steven Jackson rushes for two yards, setting up a 2nd and 8 that brings the first play we're going to take a look at.

This one is intriguing because the Rams used our own poison against us. It's the "wham" play. The same concept we used to destroy the Lions two years in a row, and the same concept the Rams unsuccessfully attempted to use against the Lions earlier this year (giving the Lions false hope that they could actually stop our wham).

Well, we couldn't stop the Rams' wham (heh, that rhymed). 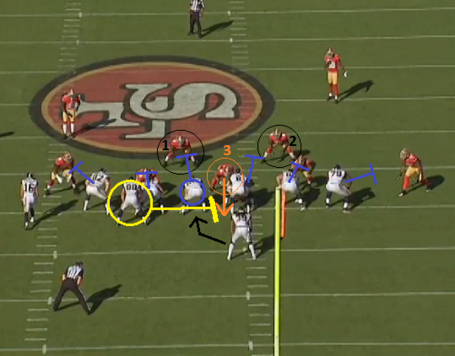 Bowman (black 1), Willis (black 2), and Sopoaga (orange 3) are the three guys to key in on here. The play call is going to have Jackson following his left guard, who is circled in blue.

The "wham" comes into effect when the two linemen in front of Sopoaga simply let him run freely into the backfield. He thinks he has a free shot at Jackson, but instead the Rams' tight end (yellow) pulls across and "whams" him away from the play.

In the mean time, Jackson will sidestep to the left and follow his lead blocker (circled blue). 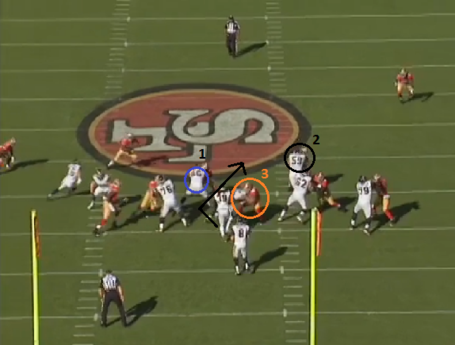 Here we have a few moments after the snap. Sopoaga (orange 3) is effectively neutralized by the wham. Jackson's lead blocker (blue) has moved on to get a handle on Bowman (black 1), and the Rams' center has also moved on to handle Willis (black 2).

They are already on the second level, giving Jackson a lot of space. Every single red jersey in front of Jackson is occupied.

Notice, also, for reference purposes in our next image, that Bowman is roughly at the 39 yard line, and Willis is engaged at the 41. Sopoaga is on his feet inside the hash marks. 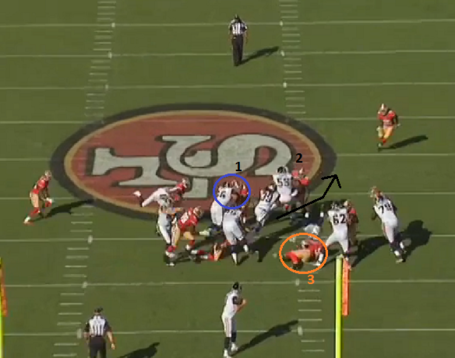 Finally, in this still, Sopoaga (orange) is on his back right on top of the hash marks. He was utterly bulldozed by the wham. Though he did manage to take the Rams tight end out with him (those are his legs in the air).

Bowman is now backed up to the 42, and Willis to the 43. Both men came in to handle the run and were pushed back a couple yards by the Rams' guard and center, respectively; giving Jackson yet more space to continue his run outside of Willis.

He is eventually wrapped up at the 46, after a 10 yard gain and a first down.

Clever and well-executed run plays like this helped contribute to Willis' and Bowman's worst rated game of the year, according to Pro Football Focus.

They ended their first drive with a passing touchdown. They ended the second one rushing. And they used the same concept to get it done. 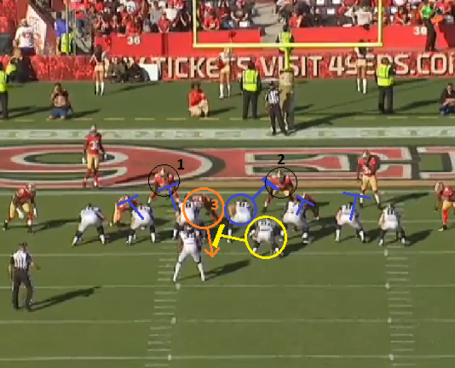 I've used all the same colors for consistency purposes. The first halfback (yellow) is running the wham. The center and guard are going to let Sopoaga (orange 3) through untouched. They will then head to the second level to block Willis (black 2) and Bowman (black 1).

The lead blocker is again the guard (blue circle). 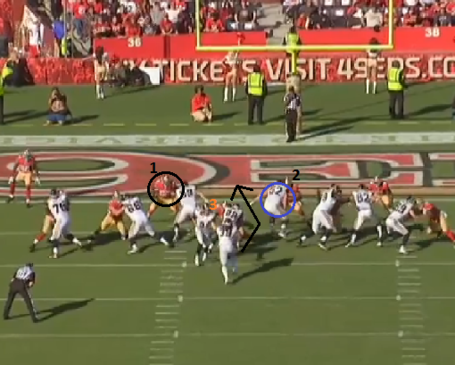 Here we have the play just as Bradford is handing it off. Just as last time, Jackson will dart the opposite way of the wham. The wham came right-to-left, Jackson darts left-to-right, following his lead blocker (blue).

The back is handling Sopoaga (orange 3), and the other two blockers are about to take care of our inside linebackers (black 1 and 2). 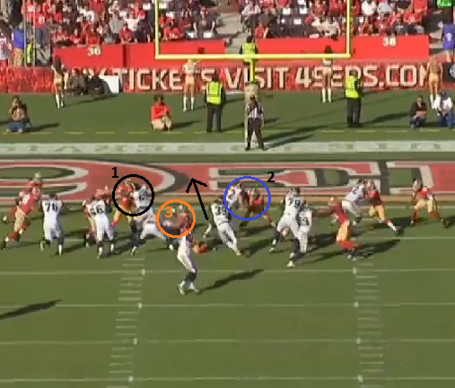 Finally we end with the blocks fully engaged on the second level. Willis (black 2) is in trouble, Bowman (black 1) is being forced away from the hole, and Sopoaga (orange 3) again ends up on the floor.

Jackson heads into the endzone untouched - much like the first play we featured.

We play this team again, and you have to believe other teams will be also looking to exploit us in this way, if they can. It will be interesting to see how we handle the run as the season continues; and in particular how we handle schemes such as this.

You have to believe our defense and Lord Fangio are good enough to get these problems fixed before long.