Share All sharing options for: The Booth Review – 49ers vs. Bears: “Bear Down”

As I mentioned in last week's edition of The Booth Review, I watched Monday night's game with my friend Tucker, a devout fan of the Chicago Bears. His postgame reaction?

Ah, the sweet taste of victory.

I'll be honest - last week's game left me in a bit of an emotional limbo. A tie? Really?! I didn't know whether to be happy or pissed off. It was an awkward feeling that plagued me all week. Fortunately, the San Francisco 49ers not only defeated the Chicago Bears on Monday night, they did so in pretty convincing fashion.

For the first time since, perhaps, Week 5 against the Buffalo Bills, the 49ers looked great in all three phases. Let's start on offense...

Before Monday night, Colin Kaepernick was a giant anomaly. We knew he could run, and we knew he had a cannon arm, but...that was pretty much it. Even after playing an entire half when Alex Smith left the game last week, there was still plenty more to learn about Kaep. For a season and a half, he was hidden behind a curtain. After Monday night, the curtain was finally pulled back.

What have we learned? Never doubt Jim Harbaugh. Remember when Harbaugh said before the season that the 49ers had three NFL starting-caliber quarterbacks? And then everybody on the internet collectively let out a chuckle? Well at the very least, he's got two out of three. Kaepernick proved that he's not only a viable backup but a capable starter as well. 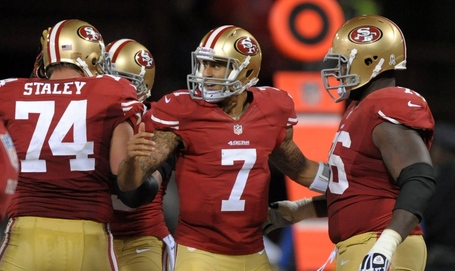 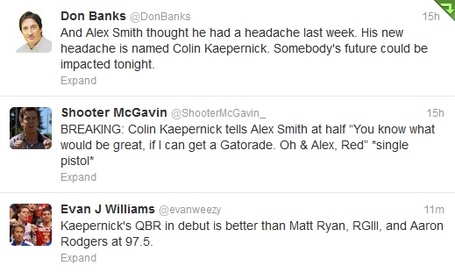 Kaepernick performed admirably against the NFL's most opportunistic defense. The Bears, who lead the league with 30 takeaways, were undoubtedly chomping at the bit for the first-time starter, but Kaepernick never faltered. He was incredibly poised in the pocket and decisive with his throws.

And how about that zip? Kaep was slinging frozen ropes all night. In the first quarter, one pass to Delanie Walker had to be bobbled before he could secure it. Then in the second quarter, with Randy Moss running up field, Kaepernick pitched a fastball that hit Moss' hands so hard, it ricocheted off his mitts and flew off the field. After the play, Moss walked over to the sidelines nursing his hand.

The thing that surprised me the most about Kaep's performance? He didn't run. Well, he had 4 rushes for 12 yards, but, what I meant was, he only ran when he absolutely had to. Typically, when you've got a mobile quarterback who's still a little green, you expect him to prematurely crumble in the pocket, tuck the ball away, and make a run for it. Kaep didn't do that. To borrow the words of Chicago Bears head coach Lovie Smith, Kaepernick "looked like a seasoned vet from the start of the game."

What did Tucker have to say about Kaep?

"Okay, we get it. You've got game. Save it for some other week."

Oh, let me taste your tears, Tucker! Oh, the tears of unfathomable sadness!

San Francisco's defense absolutely shut down Jason Campbell. Would it have been more impressive to shut down Jay Cutler? Sure. But Campbell is a more-than-capable quarterback in his own right, and the Bears certainly have their share of offensive weapons - running back Matt Forte and receiver Brandon Marshall.

Forte was held to 21 carries for 63 yards (3.0 average yards per carry), and Marshall had just 2 receptions for 21 yards. One of Marshall's two receptions was for a touchdown, but...that was pretty much it for the Bears.

Campbell had ninety-nine problems on Monday night, and they were all Aldon Smith. 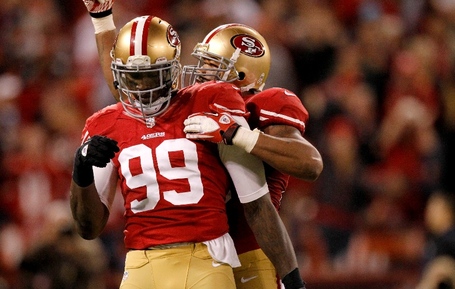 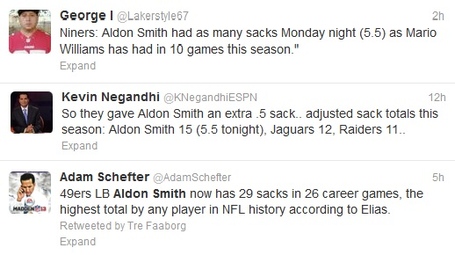 Smith singlehandedly redefined the meaning of "Bear down" as he broke the Monday Night Football record for sacks (5.5). It was the first game all season that I saw a consistent pass rush from San Francisco, and it was glorious. The Bears offensive line didn't stand a chance. What's even more impressive? San Francisco didn't do anything fancy or exotic - they simply deployed a four-man pass rush for almost the entire game.

But let's talk more about Smith. Jon Gruden was freaking out in the broadcast booth pretty much the entire night and the reason for that was Smith's prolific performance. Count me among the skeptics after the 2011 NFL Draft when the 49ers drafted Smith out of Missouri.

Well, we should all know by now who Aldon Smith is. We rarely see such a combination of pure athleticism, agility, and strength. It's really rather absurd. Not to mention, he's only 23 years old. What am I doing with my life?

Trent Baalke's first two draft picks this year - A.J. Jenkins and LaMichael James - may not have contributed yet, but his first two picks from the year before - Aldon Smith and Colin Kaepernick - are doing pretty well for themselves, don't you think?

Did you ever wonder what you would do if you were incredibly rich and famous? Buy a toilet made out of gold? Fill your in-ground swimming pool with Jell-O? No? That's just me? Okay. Well, Vernon Davis put his wealth and celebrity to use over the bye week and performed - in his words - "random acts of kindness" throughout the Santa Clara area.

"I'm just trying to be a good citizen here in the city of Santa Clara," says Davis, as he's followed by a friend who's recording the entire campaign.

In a span of days, Davis pays for a girl's jacket at an Aeropostale (above), holds an impromptu photograph session with fans, gives away free popcorn to movie theater-goers, and speaks to grade school students about the importance of education. Be warned: the videos are pretty lengthy and could have benefited from some editing.

You may have noticed that I've gone the entire length of this article without using the phrase "q_______ c_______" in regards to Alex Smith and Colin Kaepernick. There's plenty to say on the subject matter, and luckily for you, our wonderful front page staff here at Niners Nation has a lot of pieces planned for the days to come. Keep an eye out for them.

So. "The hot hand," huh? This week just got a lot more interesting.