All-22: Jason Campbell has 99 Problems

Today, we take a look at the coach's film of a couple sacks from Aldon Smith's monster Monday night performance.

Share All sharing options for: All-22: Jason Campbell has 99 Problems

I have quickly broken down two Aldon Smith sacks: one is a "quick sack" that takes a little more than two seconds to complete, and the other is a "long sack" that took slightly over four seconds. Together, they illustrate both Aldon (and Justin) Smith's incredible skill and the soundness of our unit as a whole.

This is the now-notorious "stunt" move that Justin and Aldon Smith have perfected. It is 1st and 10 for Chicago, from their own 11. 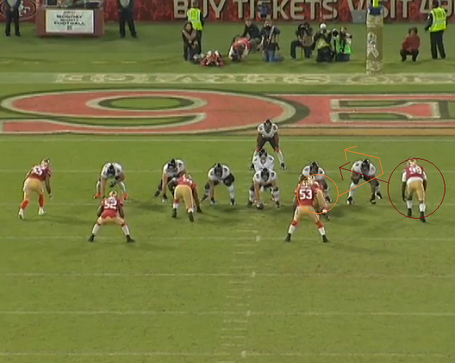 Often times with this move, Justin will proceed first, driving two offensive linemen towards the outside, allowing Aldon to cut back behind him, inside. This makes sense because Aldon is the quicker of the two.

On this play, however, Aldon (red) rushes first and occupies a couple blockers on the inside, allowing Justin (orange) to "loop" behind him, to the outside.

Bowman is partially blocking our view of Justin on the still. 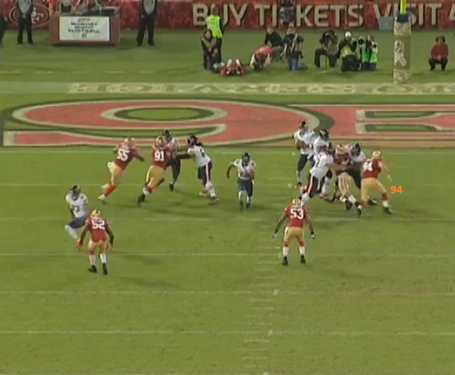 Here we have a picture right after the snap. Notice Patrick Willis is taking care of the tight end and NaVorro Bowman is spying the running back, currently emerging from the backfield. This is a common theme throughout 49er play-calling, but it takes talented linebackers to consistently guard tight ends and running backs.

Since Bowman and Willis are the best in the business, it helps allow the team to rush only four and drop everyone else into man coverage, with Goldson and Whitner providing help over the top.

Jason Campbell, is looking to his left for his first read, a very short crossing route from his outside receiver. The play is actually there for him to make. He does not have tons of space to step into it, but he could release the ball right now and complete the pass. 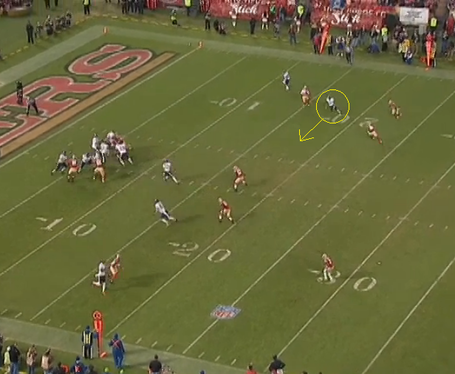 The pressure from Aldon Smith, however, who is driving a couple Bears linemen into Campbell's face, makes him hesitate. Understandably so; but with that offensive line, and our pass rush, hesitating is not something a quarterback has time to do. 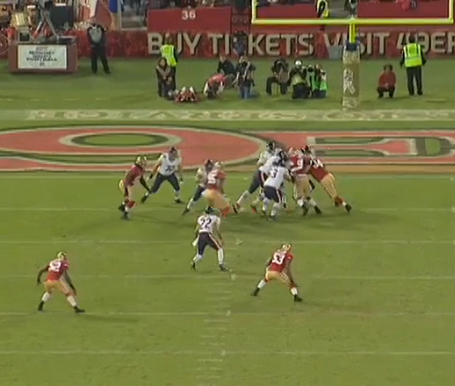 Both Aldon and Justin are pushing three white jerseys into Campbell. Neither one of them actually sacks him here. Instead, Campbell's own guys back into him, forcing him to the ground. Aldon then touches him to record his third sack of the game a mere two seconds after the snap.

Just like above, the 49ers are once again in Cover 2 Man. The safeties provide deep support, and everyone at the line is responsible for one man. It is a 3rd and 3. 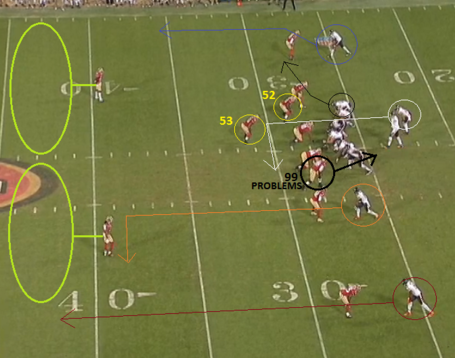 The play call here for the Bears is not a particularly good one. As you can see, all the routes are going deep, and none of them are going inside. This plays well into our coverage. Knowing that we play this a lot, and knowing that you only need three yards and your offensive line is terrible, I am not sure why the Bears called this one in. All the routes will take too long to develop and you are going to be throwing into coverage if you go deep.

The most shallow route is a quick out by the Bears tight end (black). If the 49ers were on a blitz, that dump off could work, as the top receiver (blue) would presumably clear Rogers out of the way, allowing the tight end to pick up three.

But as far as I could tell, Campbell never even looks that way (maybe because the blitz never came). 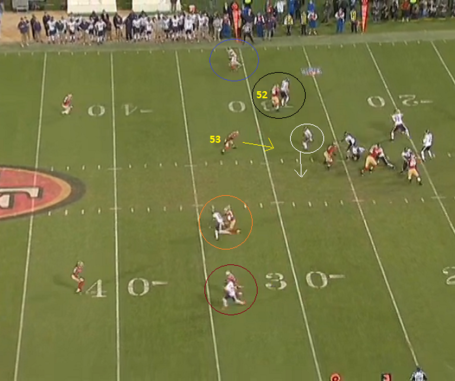 As soon as the ball is snapped, Campbell (out of the shotgun formation) looks to his left. He wants the deep pass to his red receiver (I could not see numbers very well, sorry), but he is covered well, and the ball-hawking Goldson is waiting over the top.

Though his first look was left, he could have looked anywhere at that moment and been very disappointed. The coverage was excellent across the board. Notice, too, that Willis is again on the tight end and Bowman again on the emerging RB.

Here's another look at this moment, but from Campbell's perspective: 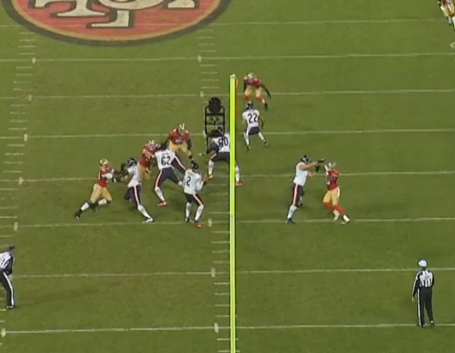 Justin Smith is taking up two Bears linemen, and Aldon is on the outside. They have already almost conquered the entire pocket.

Campbell wants the deep ball, but he's not going to get it. 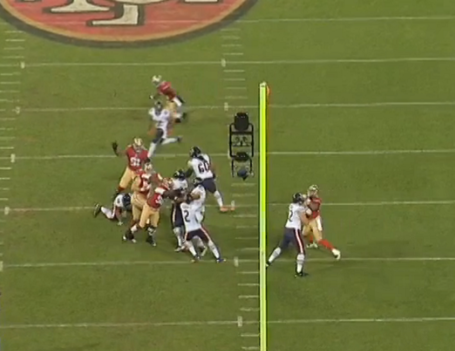 He clutches and instead tries to come back inside to Forte (#22), who is his checkdown option.

Unfortunately, not only is Forte well covered by Bowman, but Justin has shed himself of one Bears player and now him and Aldon have again backed up a couple white jerseys into Campbell's face.

As the pocket collapses, Campbell, instead of going right to where there was tons of space the whole play, tries to escape to where the pressure is coming from.

If he had stepped up to his right, it could have forced Bowman to account for him, allowing Forte to get open; or Bowman could have already been too dedicated to Forte, and Campbell easily could have ran for three yards and a first down.

As it stood, and as you can tell by the angle of his body, he tries to flood left, straight into Aldon Smith's long arms roughly four seconds after the snap: your standard coverage sack.