Share All sharing options for: Kyle Williams, Kendall Hunter carted off with injuries on same play

It's not too frequently that you see two different players carted off the field at the same time. That happened to the 49ers as running back Kendall Hunter (32) and wide receiver Kyle Williams (10) were both carted off the field. According to beat writers in attendance, Williams is out with a knee injury and Hunter is questionable to return with an ankle injury. Hunter was running when he took the hit, while Williams was blocking when he went down and reached for his knee.

The 49ers activated Brandon Jacobs and also have Anthony Dixon to work in behind Hunter if he is unable to return. The loss of Williams means Ted Ginn likely goes back in as the return man after he was replaced by Williams following a fumble on a return earlier in the game. 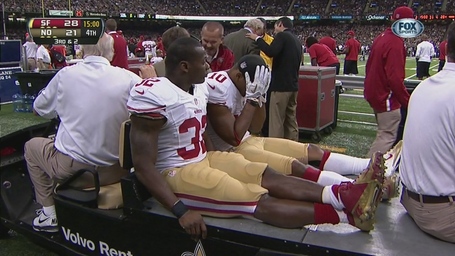