Share All sharing options for: The Booth Review – 49ers vs. Saints: “Big win, bigger controversy in the Big Easy”

The San Francisco 49ers rolled over the New Orleans Saints on Sunday by a score of 31-21. It was a rematch of, perhaps, one of the greatest playoff games of all time as the two teams met in the Divisional Round this past January. The Gregg Williams ‘Bounty-gate' scandal only added to the mystique of the hotly-contested matchup. On Sunday, however, an entirely separate controversy was permeating the air, and it was suffocating.

Colin Kaepernick received the nod to start against the Saints over incumbent veteran Alex Smith, and it had nothing to do with Smith's health. Smith was medically cleared to play and was in full-uniform, but he never set foot on the field. Instead, he watched his protégé from the sidelines. We know this, because the cameras only showed Smith about 4,629 times throughout the game. More on this later. 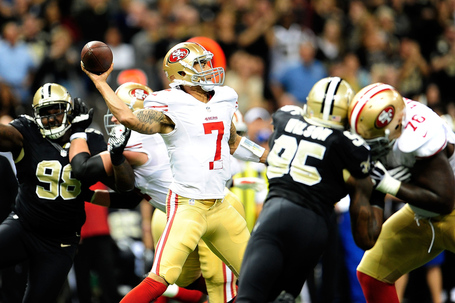 NEW ORLEANS, LA - NOVEMBER 25: Colin Kaepernick #7 of the San Francisco 49ers drops back to pass while under pressure during a game against the New Orleans Saints at the Mercedes-Benz Superdome on November 25, 2012 in New Orleans, Louisiana. (Photo by Stacy Revere/Getty Images)

We all know Kaepernick has incredible arm strength, but he continues to prove to be an accurate passer as well. Kaepernick completed 64% of his passes and accounted for a pair of touchdowns - one to running back Frank Gore and another by running the ball in himself for the first score of the game.

Over the last two games, Kaepernick has played as well as a seasoned veteran at times. However, there's an occasional hiccup you'd expect from a quarterback in his second career start.

On San Francisco's second offensive drive of the game, Kaepernick broke the huddle, and there appeared to be some confusion with Gore and fullback Bruce Miller and where they were supposed to line up. San Francisco was forced to use a timeout to avoid a delay of game penalty. After the timeout, the 49ers came out in the same exact formation, but instead, Gore motioned to the right side instead of the left. It was a combination of miscommunication and a raucous stadium crowd.

"It was loud at times. We had to make sure we communicated the play well, make sure everybody could hear what we were doing," said Kaepernick. "There were a couple of plays where we had a little bit of confusion as far as hearing. Other than that, we got settled in and got back to playing like ourselves."

After just about every play Kaepernick would make - as spectacular or unspectacular as they were - there was Alex Smith wearing a grimace on the sideline with a helmet on his head and a football under his arm. For Smith, it was probably like seeing a younger, more handsome man hitting on his girlfriend at the bar. Sure, they had their share of heated arguments, but things were all better now, he thought. Yet there she was, laughing uproariously with another man, and all he can do is bitterly sip from his cup and watch from afar. Eager to act but helpless to do so. 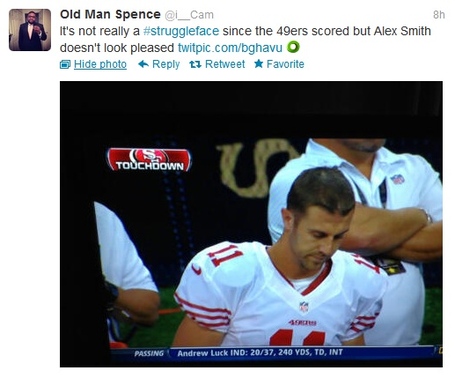 The entire situation was incredibly awkward.

I couldn't help but notice that head coach Jim Harbaugh was rather tame in celebrating with Kaepernick after his touchdown run as if he didn't want to further alienate Smith. This quarterback controversy is rather unique in that Smith wasn't benched for poor performance; as the league's most accurate passer, he led the 49ers to a 6-2-1 record before his concussion. And we know he wasn't benched due to health reasons either as he was technically Kaepernick's backup.

We can only speculate as to why Harbaugh went with Kaepernick over Smith, but I think the answer is quite simple. The 49ers traded up in last year's draft and invested the 45th overall pick on Kaepernick. It was only a matter of time before he was handed the keys to the car. Once the opportunity presented itself, he didn't just take the keys. He gassed it, and never looked back just as he did at Nevada.

I also see a distinct tradeoff. With Smith, the 49ers are guaranteed 'safe' quarterback play, and I mean that in the most complimentary way possible. Smith has basically conditioned himself to play error-free football, and since 2011, he's been incredibly successful in that regard. He simply doesn't take many risks, and as such, doesn't make very many mistakes. Kaepernick, on the other hand, isn't afraid to take risks. In two games, we've seen him try to fit the ball in some incredibly tight windows. Simply put, Kaepernick gives the 49ers 'big play potential' at the expense of consistently 'safe' quarterback play. It also doesn't hurt that he has 4.53 speed.

Kaepernick has been on fire over the last two weeks, and at this point, I would be absolutely shocked if Smith regained his starting job for any other reason than a Kaepernick injury. *knocks on wood*

On Sunday, the 49ers defense returned two interceptions for touchdowns - the first time for the franchise since 1995. The first one was plucked out of the air by outside linebacker Ahmad Brooks who outpaced Drew Brees en route to the end zone. The second pick was tipped off the hands of receiver Marques Colston and into the arms of safety Donte Whitner who followed a caravan of blockers for the score.

After recording five and half (!) sacks against the Chicago Bears last week, Aldon Smith added one and a half more to his season total against the Saints. Smith now sits atop the league with 16.5 sacks through 11 games. If he continues at this pace, he'll have 24 sacks by season's end which would break the NFL single-season record for sacks - 22.5 held by Michael Strahan. Smith has already eclipsed his rookie season sack total (14) and has recorded 30.5 sacks through 27 regular season games - the fastest player to reach that number in league history.

Even the injury cart driver got more action than Alex Smith on Sunday. If I didn't know any better, I would have thought both teams were bounty-hunting.

Safety Dashon Goldson was San Francisco's primary headhunter. He absolutely leveled receiver Lance Moore who then had to get checked out in the locker room. On Donte Whitner's interception, the ball was initially tipped by receiver Marques Colston who couldn't field the catch cleanly, because he was completely upended by Goldson. Colston was flipped upside-down before landing on his head and rolling over motionless. His fall and reaction was so horrifying that I couldn't even enjoy Whitner's touchdown. Fortunately, Colston would be okay.

Following the same running play, both running back Kendall Hunter and receiver Kyle Williams were on the ground with injuries. Neither would return to the game. Williams appeared to have injured his knee while Hunter was later seen wearing a boot on his left ankle. Additionally, tight end Delanie Walker suffered a hip injury and had to be carted back to the team bus after the game.

Both Hunter and Williams are expected to miss some time which may finally open the door for the 49ers' first two draft this this past April - receiver A.J. Jenkins and running back LaMichael James. Ted Ginn Jr. was responsible for a muffed punt and turnover which resulted in a Saints' touchdown. If Ginn is still in the dog house by next week, both Jenkins and James have experience returning punts and could be viable options as replacements.

This Sunday, the 49ers will travel to St. Louis to face the Rams for the second time this season. Remember that ugly "1" on San Francisco's record this year? That annoying number that follows the wins and losses column? The stupid extra digit that I have to type now every time I mention San Francisco's record? Well, I hope the team's as peeved as I am about it and exact revenge by actually beating the Rams this time around.