Anthony Davis finger injury: The 49ers OT is kind of a bad ass

Share All sharing options for: Anthony Davis finger injury: The 49ers OT is kind of a bad ass

Following the 49ers 31-21 win, Anthony Davis sent out a pretty spectacular tweet with an x-ray he had taken after the game: 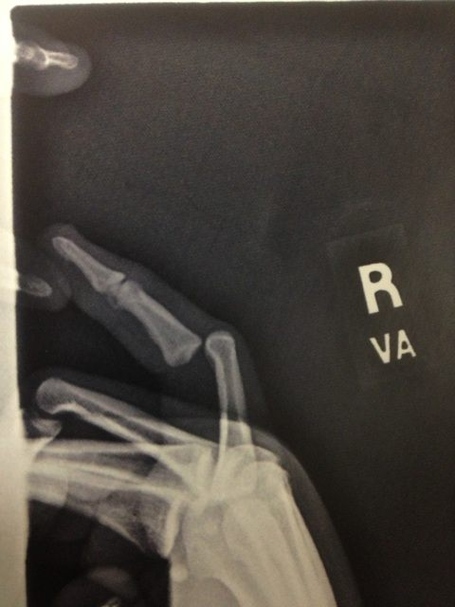 Don't panic, i have 9 other fingers. lol

First off, given the nature of finger bones, that would appear to be a dislocation, as opposed to a break, correct? I'm not a doctor so feel free to correct me. Either way, that's a pretty gnarly looking x-ray. Of course, I've never broken anything (knock on wood) so I guess I haven't had a chance to see too many x-rays like this. I also ask in part because I'm curious what kind of recovery process is involved. My guess is we'll see him with some kind of cast or brace or whatever against the Rams.

Joe Staley shot out a tweet a little later after the game that summed things up:

Also @anthonydavis76 is a beast. Played the whole second half with a broken finger. He is an effin stud tackle

Anthony Davis has taken a huge step forward in 2012 and is putting together a great year, and this only adds to the season. You can still vote for the Pro Bowl, so make sure to get as many votes as you want in before polling closes in mid-December. You can vote for as many or as few players and positions as you want, so head over and get some votes in for the 49ers offensive line.