If I could pick one individual on the 49ers that could benefit most from Colin Kaepernick getting the nod at quarterback, it's Michael Crabtree.

As soon as Kaepernick took to the field, he was generating explosive plays to his wide receivers, either by taking shots downfield, throwing them open or both. By the looks of things, it looks like Kaepernick is going to throw for more yards and and touchdowns. 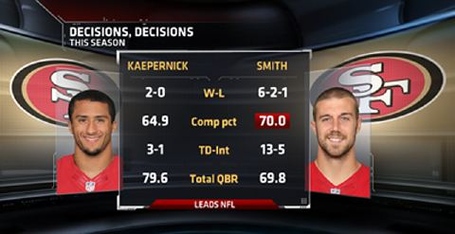 And while Crabtree was developing a rapport with Alex Smith, his ceiling is much higher with Kaepernick.

"There's not too many guys that can throw the ball like Kaep," said Crabtree on Wednesday. "I think we're capable of doing anything, I mean, with the defense we have...The guy is really showing that he can be a starter in this league."

The 49ers will have a lot of opportunities to make plays in the passing game and we've seen that Kaepernick will pull the trigger. He's a little more of a risk-taker than Smith, and that could be a good thing and a bad thing. In Crabtree's case, it's a good thing.

He's a receiver that isn't known from separating from defenders, but is known for making plays after the catch. Kaepernick will take chances on an otherwise covered Crabtree, and give him opportunities to make plays on the ball.

And Crabtree's ability as a YAC machine has been a tremendous asset for this team.

No. 15 has been off to a okay start with Kaepernick, making 6 catches on 10 targets for 57 yards and a TD in the past two games. But it is a relationship that could really blossom with time.

Crabtree will also soon discover, if he hasn't already, that Kaepernick's mobility and natural elusiveness is a great quality to have in a quarterback. The second-year passer will extend the play with his legs and give Crabtree more time on his routes. And once they break down, Kaepernick will be prepared to communicate and improvise on the fly.

In fact, this combination of talents resulted in the duos TD connection in Week 11 versus the Chicago Bears.

It will be interesting to see how Crabtree's game develops with Kaepernick under center, but it wouldn't throw me to see a spike in his performance.