Brooks' big day ends with him contributing towards two clutch sacks on two separate drives in the 4th quarter. We break it down on the coach's film.

Share All sharing options for: All-22: Ahmad Brooks' Big Day

49ers outside linebacker Ahmad Brooks made a big decision back in late February: he chose to stick around the San Francisco area for the offseason, rather than go back to Virginia with his family.

The Niner front office reciprocated that big decision with a 6-year, $17 million-guaranteed contract that guaranteed Brooks would be a part of a soon-to-be elite linebacking corps.

After signing the offer, Brooks noted his pleasure with the San Francisco coaching staff:

"Coaches were always giving me an excuse like, ‘well he doesn’t know the defense, he can’t learn the defense.’ That’s a lie," Brooks said Tuesday after signing his contract. "That’s always been a lie. We practice the same things every day. How can I not remember what I practiced every day? I’m just happy to get this chance at just having a coaching staff that believed in me to go out there and showcase my talent."

I expected big things from Brooks this year. Partly because he seemed to have turned a personal corner and was ready to step up his game, partly because his long-term deal suggested the coaching staff's faith in him, and also partly because I boldly (read: homerly) predicted that all four starting 49er linebackers would make the Pro Bowl this year - and assuming Willis and Bowman continued their awesome ways, and Aldon continued to rack up high-profile sacks, that left Brooks as the odd man out with something still to prove.

Well, maybe this Sunday against the Saints was his coming out party for those who were yet unfamiliar with his work.

Tre provided us with an All-22 breakdown of his pick-6, in which he displayed a blazing speed you do not often get to see linebackers utilize because they rarely have to sprint 50 yards on a given play.

We're going to follow that up, here, with two more plays that showcased Brooks' speed, but over a much shorter distance.

We start with his first sack of the game.

With less than six minutes left to play, and the Saints trailing 31 - 21, quarterback Drew Brees needed to drive the team down the field twice to at the very least force overtime. 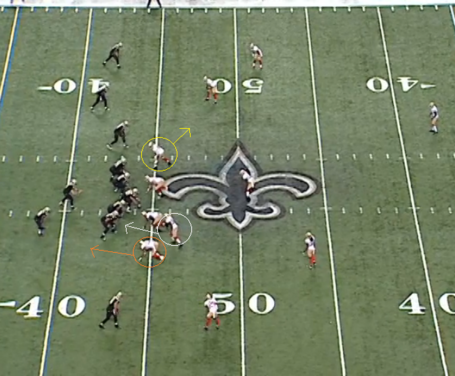 The 49ers are not in their usual package. Justin Smith and Ray McDonald are the only linemen in, and they line up side by side near the center.

San Francisco replaced Sopoaga with a fifth defensive back to match New Orleans' pass heavy formation. This means, as opposed to Willis or Bowman coming out in such nickel situations, the 49ers kept all four linebackers in the game.

Brooks (orange) is going to fly outside with Willis (white) right beside him. Bowman is standing in the middle of the fleur-de-lis, but luckily not because he plans to do a Terrell Owens impression. Aldon (yellow) is the main one to focus on, though.

Typically, Aldon would be the first guy pass rushing here. It's a 3rd down and the Saints are in an obvious passing set. But, instead, the 49ers did something that they did well all day: they dropped various linebackers back into coverage. 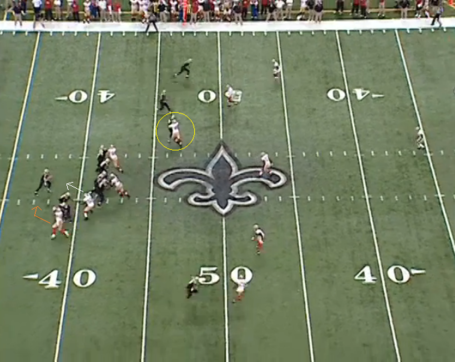 Aldon has dropped back to cover a receiver - perhaps even the one Brees anticipated being able to hit right away.

But instead, he is getting mauled by Aldon and, in the mean time, Willis (white) is about to juke past the Saints' RB as if he's not even there. McDonald (who had a really great day) and Justin are taking up two blockers each. Nothing new there.

Brooks (orange) is using his speed to beat his man outside and around. It leads to this: 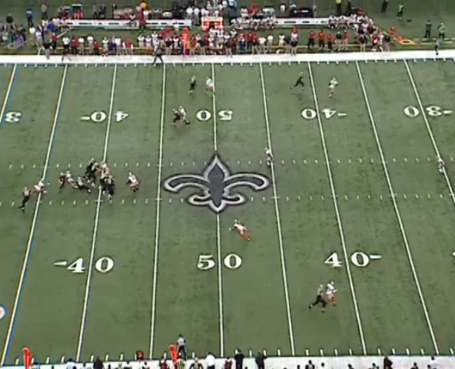 Everyone is covered quite well - not that it matters. Willis is hanging on Brees' arm as we speak and Brooks has raced around his man outside to finish the job.

The two split a sack, costing the Saints 9 yards and setting up a difficult 4th and 11 that they would fail to convert.

On this next sack, Brooks didn't get any official help - though, the help was definitely there if he needed it.

After Akers' first missed field goal (that sentence is being said too much lately), the Saints have a 1st and 10 from their own 40. 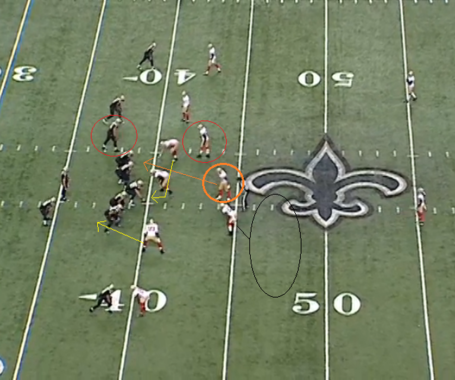 We have the same group of guys in. McDonald and Justin are the only down linemen, while the four linebackers join them up front, and five backs round out the defense.

On the last play, Willis rushed with Brooks while Aldon dropped into coverage and Bowman played spy in the middle. In keeping with the 49ers' varied looks, however, this play looks slightly different.

Bowman (red) will instead play man-to-man with star tight end, Jimmy Graham (also red). Willis (black) is going to hover right about where he is and spy the backfield, while Aldon (bottom yellow) and Brooks (orange) are going to rush. Is there seriously a more talented group of guys than our front seven anywhere else in the National Football League?

The other interesting part of this play is Justin, who is running a stunt, but with Brooks. As Brooks flies (and I do mean "flies") past everyone into the backfield, Justin will loop inward, behind both Brooks and McDonald, and attack the pocket from the inside. 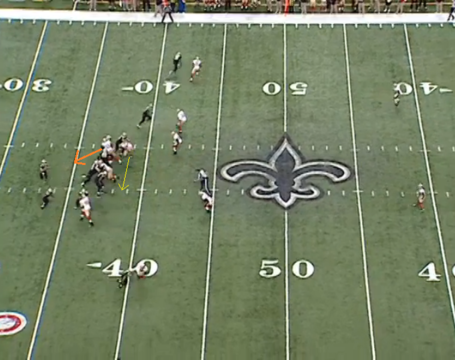 Justin (yellow) is making his cut inside; McDonald is, again, taking up a couple blockers in the middle; and Brooks blows right by his man with a great move as if he were a running back himself.

Brooks explodes into the backfield, leaving Brees little time to do much of anything. 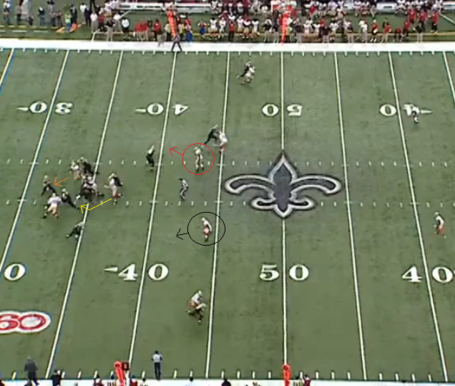 The coverage is good deep with Bowman (red) also converging on Graham on the shallow route.

Brooks finises the sack a moment later, forcing a 2nd and 17 that would eventually lead to a second straight three-and-out for the Saints' mighty offense.

You can target or game plan for whichever linebacker you want, but either way one of the 49ers' new "We Don't Need No Dome" Dome Patrol is going to make you pay eventually.

Perhaps it's fitting that San Francisco's least well known linebacker - and the one needed to round out this elite group - had his biggest game of the year in the same dome that produced the greatest linebacking corps ever to grace an NFL field.

History repeats itself. Lord Fangio makes sure of that.