Say it with me, altogether now: "We are halfway through the regular season."

Through eight games in the 2012 season, the San Francisco 49ers sit atop the NFC West with a record of 6-2. But if we can take a step back and look at the bigger picture, I think we can find something else, something greater worth celebrating.

Say it with me, altogether now: "We are completely through with mediocrity."

I remember a time not too long ago where, year after year, the only thing to look forward to in November was the NFL Draft in April. Incompetent coaching, lackadaisical play, an apathetic fan base...those days are over. The culture has changed.

In a year and a half, the 49ers have accrued a total win-loss record of 19-5 under head coach Jim Harbaugh. That's more wins than the 2004-07 seasons combined. Think about that for a second.

Many pundits pinned the 2011 season as a fluke, but a year later, they're eating their words. Not only are the 49ers still winning games, they're winning games against quality teams. The Green Bay Packers and the Detroit Lions were both playoff teams a year before. The much-improved Arizona Cardinals and Seattle Seahawks boast wins over teams like the New England Patriots and Minnesota Vikings who both have winning records.

The improvement is both staggering and undeniable.

Admittedly, there are consequences from a fan perspective when the bar is raised. Quite simply, I expect quality football. I expect wins. When I see Alex Smith throw a 40-yard touchdown to Vernon Davis, I ask, "Where's the next one?" When I see Aldon Smith drop a quarterback on his head, I say, "Do it again." It's a small price to pay, but it's a price worth paying, because once you've had filet mignon, it's hard to go back to flank steak.

So here we are in the month of November, and for the first time in years, I can confidently say that the NFL Draft is sitting comfortably in the backseat of my mind. The only destination on the horizon? Super Bowl XLVII. 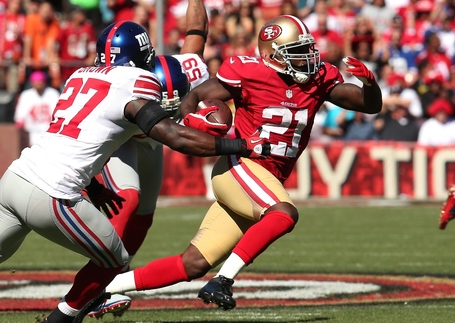 If you would have asked me in August what Frank Gore would do this year, I would have told you, "diddly squat." Kendall Hunter proved the year before that he was a reliable spell. The team had just drafted LaMichael James in the 2nd round of the draft. Not to mention, Gore is 29 years old, which is something like 83 in running back years. By all indications, he was due for a down year.

Being wrong never felt so good. Frank ‘The Tank' is on pace to record his best single-season rushing performance since 2006. He gains an average of 5.5 yards per carry, which is 3rd best in the league behind Adrian Peterson and C.J. Spiller.

There's a strong correlation between Gore's number of touches and wins. In San Francisco's two losses this season, Gore averages just 10 carries. In the team's wins, Gore averages 16.5 carries. It's no secret that the 49ers thrive on the ground - they average 168.6 rushing yards per game which is the best in the league. While the passing game may need some fine-tuning, there shouldn't be many changes to the running game. Feed Frank and watch him go. I'm convinced he's one of the Top 3 running backs in the league. 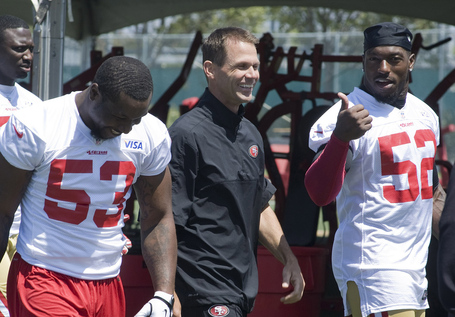 I went back and forth for a while between these two before taking the chump's way out and picking both of them.

Both have a similar stat line and both have the uncanny, unquantifiable ability to just make incredible plays. Their closing speeds are simply absurd. I would love to see Bowman and Willis in a foot race. Actually, I would love to see how they stack up against each other in a myriad of competitions. Why hasn't ESPN's Sports Science done a segment on these freaks of nature yet? Imagine having them wrestle lions or push Mack trucks. Not only would it be incredibly entertaining, it would be for the sake of science.

Willis and Bowman are the triggermen for the 5th best run defense in the league (an average of 87.4 rushing yards allowed per game). You can't convince me that there's a better duo of inside linebackers in the league right now. And in case you forgot, both of them received votes for the Associated Press' Most Value Player award last year. 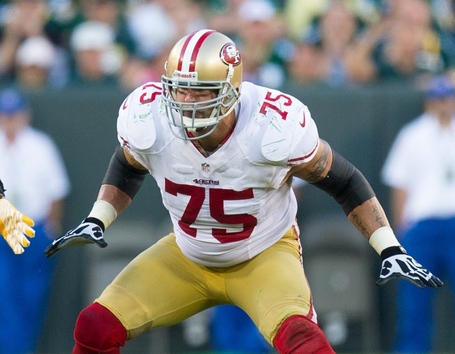 In Week 2, I wrote about Alex Boone's remarkable journey to get to where he is today. Is it weird for a fan to feel prideful about an athlete? Because I feel incredibly proud of Boone for what he has been able to do. He went from undrafted rookie to unseatable starter, and he did it through years of hard work and patience.

At the beginning of the season, the area of most uncertainty was the right guard position. Eight games later, I feel compelled to call it one of the team's strongest points. I think Boone is having a Pro Bowl-caliber season, I really do. And you better believe that Gore's resurgence has much to do with Boone's strong play on the inside.

The Disappointment (kind of) 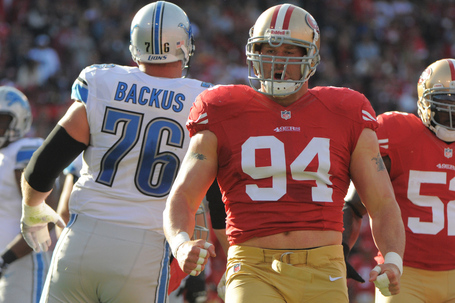 I could name a few players who have seriously been lagging behind this season. I'm talking to you, Tarell Brown. However, I never had high expectations for Brown to begin with despite his ridiculous promise to lead the league in interceptions. For the record, he has recorded exactly zero.

Justin Smith, on the other hand, was in the conversation for league MVP last season. When you receive that much critical acclaim, there's usually nowhere else to go but down. Smith has played pretty well this year, but he's not quite the dominant force on defense that he was in 2011.

The reason for his drop in production is quite simple: game-planning. Opposing coaches are well-aware of what Smith can do one-on-one (just ask Jermon Bushrod), so they keep him at bay by double-teaming him. A guard will slide over to assist the tackle or a tight end will stay inside to help block.

However, here's the silver lining: while Smith is commanding double-teams, this frees up a lot of space for Aldon Smith. Aldon has 7.5 sacks through eight games, and if you ask me, he's going to get a lot more as the beneficiary of the guy in front of him. Justin is playing well as a space-eater, but I'd love to see him be more disruptive in the backfield.

"Confessions of a benchwarmer" 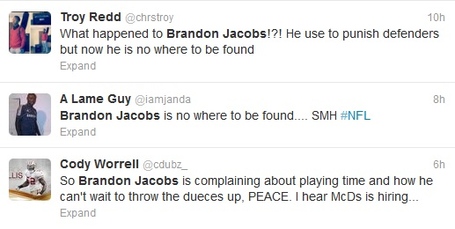 Brandon Jacobs has been causing quite the virtual stir lately. He's frustrated by the fact that he's yet to play a single regular season snap. What's an impulsive athlete to do? Air his grievances on Twitter, obviously. 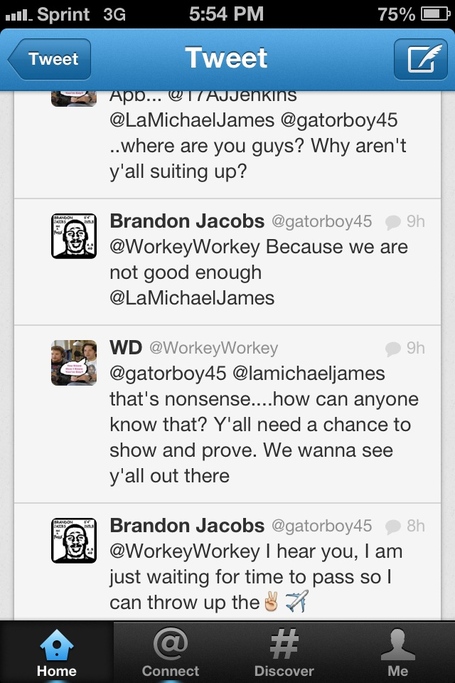 (Courtesy of "49ers finest" from the 49ers message board)

In case you can't make it out, Twitter user @WorkeyWorkey composed a tweet to A.J. Jenkins, LaMichael James, and Brandon Jacobs asking, "Where are you guys? Why aren't ya'll suiting up?" Jacobs responds, "Because we are not good enough," also tagging James in the tweet.

@WorkeyWorkey writes back, "That's nonsense. How can anyone know that? Ya'll need a chance to show and prove. We wanna see ya'll out there." Jacobs responds, "I hear you, I am just waiting for the time to pass so I can throw up the [peace sign] [airplane]."

The Twitter exchange has since been deleted, and Jacobs seems to be pretending like it never happened at all. 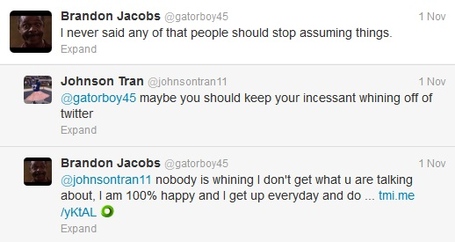 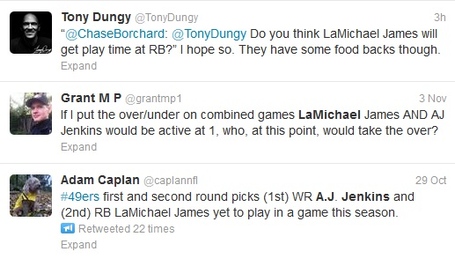 A.J. Jenkins and LaMichael James might as well be Waldo and Carmen Sandiego, because they're nowhere to be found. Despite being the 49ers' 1st and 2nd round picks in April's draft, neither has even suited up for a regular season game.

Similar to Brandon Jacobs' situation, their absence on the field is a testament to San Francisco's depth at the receiver and running back positions. Ahead of Jacobs and James are Frank Gore, Kendall Hunter, and Anthony Dixon. Hunter is simply the most reliable runner behind Gore, and Dixon has added value as a special teams player.

In regards to Jenkins, the 49ers are more likely to utilize double-tight end sets than anything with more than three wide receivers. And the three receivers that take the field most often are Michael Crabtree (55% of offensive snaps), Mario Manningham (45%), and Kyle Williams (37%).

James was a perpetual homerun hitter back at Oregon. Jenkins didn't have as many opportunities to showcase his talents in a run-heavy Illinois offense, but both have breakaway speed. Harbaugh loves keeping opposing defenses on their toes, so don't be surprised if he pulls back the curtain on these two later in the season (dare I say playoffs?).

"Should he stay or should he go?"

This conversation may be a bit premature, but as Michael Crabtree is poised to have his biggest season yet, I can't help but wonder if he'll even be on the team 3-4 years from now.

For the record, Crabtree is signed through the 2014 season. However, the last year of his contract can be voided if he...

Who could forget Crabtree's holdout during his rookie year that lasted seven weeks into the regular season? Nothing says, "I love money," quite like, "Give me more money." Crabtree is going to be looking for a big payday once his contract expires and not even M.C. Hammer could change my mind. He's done a good job thus far of saying the ‘politically-right' things, but if Jerry Jones threw a 6-year, $60-million contract into his lap, you don't think he'd bite? What's even more intriguing - would the 49ers even be willing to match such an offer?

If we know anything about general manager Trent Baalke, it's his unwillingness to engage in a bidding war. Once he assigns a monetary value to a player, he will stick to it. There's no doubt that Crabtree is the team's top receiver at the moment, but could the 49ers be preparing for life without him? As mentioned, they did spend a first round draft pick on A.J. Jenkins this year.

Crabtree has developed quite a rapport with Alex Smith this season. The trust was evident against the Arizona Cardinals last Monday when Smith went to Crabtree twice in the red zone who scored on both receptions. I truly believe that Crabtree's best years have yet to come and he is only now beginning to realize his potential. I just hope he'll be wearing red and gold once he finally does.

The San Francisco 49ers will be tested within the division over their last eight regular season games. This Sunday's matchup against the St. Louis Rams will be the first out of four remaining NFC West games for the 49ers.