We discuss professional athletes and their off-the-field issues, citing a few current members of the San Francisco 49ers.

Share All sharing options for: The San Francisco 49ers, character issues and perseverance

San Francisco 49ers superstar linebacker Aldon Smith has been under the microscope recently; scrutinized by the media and fans for his off-the-field agenda. In what seems like nothing more than bad luck supplemented by a little questionable decision-making, Smith has found himself in some peculiar situations.

For as long as we can remember, even the highest caliber athletes have made less than exemplary decisions. Whether it was Michael Jordan, Ray Lewis, Lawrence Taylor or Pete Rose, professional athletes have shown their lapse in judgment like any other average Joe.

And each case is different.

For some, it takes a harsh dose of reality before they realize the gift they have in life. Others waste away an entire career believing in a false ideal - that they are above the law and can have it all.

And some men come back stronger than before, only after recognizing this is their chance to leave their legacy. And an opportunity like that should not be taken for granted, because it won't last forever.

Even on the 49ers roster, there are a number of examples of players with troubled pasts that have overcome the pitfalls of life. And it's also shown us that the road to greatness isn't as vanilla and cookie-cutter as the analysts and pundits would like it to be.

At Penn State, linebacker NaVorro Bowman went through some trying times, having lost his father unexpectedly. After which, Bowman admitted to using a banned substance (marijuana), and was penalized accordingly by the university. There was also an incident where the PSU linebacker was charged and pled guilty to disorderly conduct.

Bowman responded with a strong campaign in what would be his final year, still managing to be drafted in the third round.

Considering Bowman had first-round talent, his draft stock took a hit. Now, the Niners inside linebacker is an All-Pro and arguably one of the league's best overall defenders. A father of two, family and football are the main focuses in Bowman's life.

A highly regarded college prospect, Ahmad Brooks, went to the University of Virginia on a full athletic scholarship. While at the university, Brooks was caught using marijuana and lost his scholarship, but not his hope. Brooks entered the 2006 NFL Supplemental Draft and was selected by the Cincinnati Bengals.

After sustaining an injury almost immediately, Brooks was eventually waived by the team and picked up by the 49ers. This past offseason, San Francisco extended Brooks with a six-year, $44.5 million deal that will lock him up as the starter for the league's best defense until 2017.

While Randy Moss has avoided significant legal issues throughout his career, he has made some mind-boggling decisions. Moss' biggest personal downfall is that he often wears his heart on his sleeve. Even though he is a first-ballot Hall of Famer, Moss has blown through multiple opportunities in this league.

When he first retired, the chatter was initially about what could have been. Moss was perhaps the one receiver that could have eclipsed the numerous NFL records held by Jerry Rice.

But for quite some time, Moss' on and off-the-field antics were just media calamity after media calamity. He was described as a poison, a cancer, a bad teammate and an unnecessary distraction. However, he's continued to grow as a player, ignoring the naysayers and working on his imperfections. 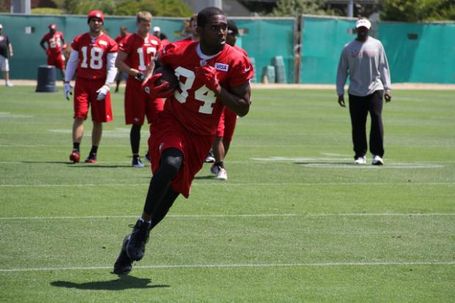 The future Canton inductee has been a myth-buster with the 49ers in 2012. He's been patient, selfless and effective both on and off the field. He is in a very advantageous position to end his career on a high note.

Perrish Cox, Ray McDonald, Brandon Jacobs and Michael Crabtree have also either had legal run-ins or been labeled with the "character issue" tag.

The point is, character issues are a very small aspect of one's career, but sometimes they can be defining - it can be used for good.

Aldon Smith is still young, so his story is yet to be written. These eye-grabbing headlines featuring Smith's name may or may not continue, but he's in a position to overcome them.

As we've seen with several current 49ers players, Smith can use it as fuel to better himself as a player and person. He needs to take advantage of the moment and the environment he is in. Perhaps my favorite example of perseverance through hardship was what Ray Lewis overcame a decade ago.

No. 52 will be remembered as one of the greatest players to ever grace the NFL. And given what Lewis endured, Smith's obstacles seem minor in comparison. This rocky road Smith is traveling could be a huge turning point in his young career if he allows it to be.