The Booth Review – 49ers vs. Dolphins: "Gore guts the 'Phins"

Share All sharing options for: The Booth Review – 49ers vs. Dolphins: "Gore guts the 'Phins"

Note to readers: This is gonna be a brief one, folks. It’s finals week in college land, and this guy’s got a whole lot of papers to write and Shakespeare to read! I promise to be back in action at full strength next week once my brain makes a complete recovery.

As the regular season winds down, the playoff picture in the NFC is still uncomfortably crowded. Despite losing to the Carolina Panthers, the Atlanta Falcons still have a firm grip on the first seed, and with an important win over the Miami Dolphins on Sunday, the San Francisco 49ers currently own the second seed. The Green Bay Packers, Chicago Bears, New York Giants, and yes, even division-rival Seattle Seahawks remain in hot pursuit. 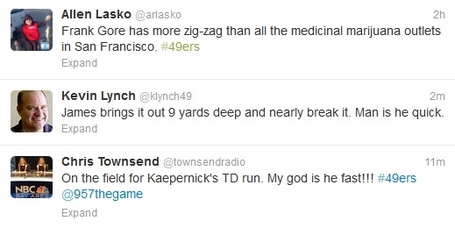 Somewhere in the back of my mind, I had the creeping notion that we were in for yet another overtime period, in which case, I would have just quit football forever. Fortunately, this wasn't the case as a trifecta of rushing touchdowns in the second half finished off the Dolphins.

First of all, how about that Frank Gore? For a second there, I thought maybe I had bumped my head and traveled back to 2006. Gore looked like he was running on a fresh set of legs and produced some of the most impressive runs I've seen from him in years.

Early in the third quarter, Miami returner Marcus Thigpen was back for the punt return but let the ball slip right through his hands and onto the grass. C.J. Spillman recovered the fumble to put the 49ers at the Dolphins' 9-yard line. Two plays later, Gore was in the end zone for the first touchdown of the game. 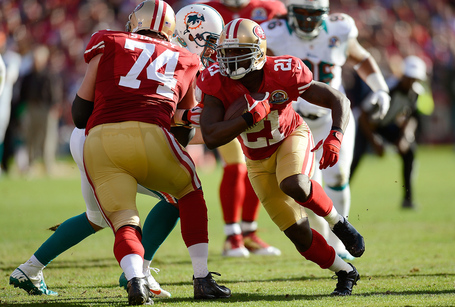 SAN FRANCISCO, CA - DECEMBER 09: Frank Gore #21 of the San Francisco 49ers rushes with the ball against the Miami Dolphins in the second quarter at Candlestick Park on December 9, 2012 in San Francisco, California. (Photo by Thearon W. Henderson/Getty Images)

Gore needs just one more rushing touchdown to surpass both Joe Perry (50) and Roger Craig (50) as the 49ers' all-time leader. He could have gotten it early in the fourth quarter after ducking, juking, and dashing 19 yards all the way down to Miami's 1-yard line, but on the very next play, he was spelled by Anthony Dixon who ran in the score.

Gore was eluding Dolphins tacklers all day, but he did receive one nasty hit in particular from...his right guard Alex Boone. In the third quarter, Boone was tailing Gore on a run and as Gore hit the brakes, Boone collided into his running back from behind.

"He keeps tackling me!" Gore exclaimed after the game, with a grin. "He's tackling me in Minnesota, in Seattle...I gotta ask him what he's got against me, man. I told him, 'you gotta stay off me, man! Let me get another touchdown!' "

Gore has now surpassed 1,000 rushing yards for the sixth time in his career - the most by any 49er. Gore is only the second active player in the league to have six 1,000-yard seasons (St. Louis Rams' Steven Jackson is the other).

After the game, the Miami native was seen wearing quite a peculiar hooded sweatshirt: 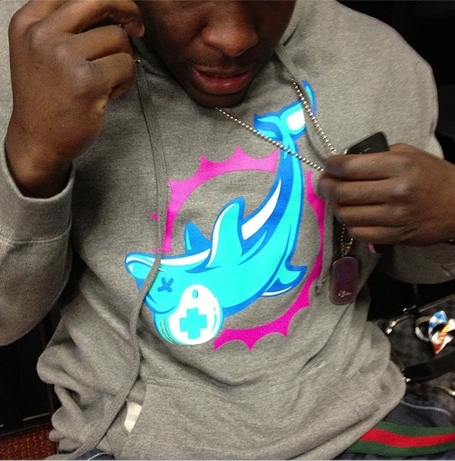 (Courtesy of Matt Barrows from The Sacramento Bee)

"I got this before the season," said Gore. "When I knew we had the Dolphins on the schedule, I said, we gotta flip them upside down when we play them, you know?"

Rookie running back LaMichael James was activated for the first time all season, and even in a limited role, he was very impressive. With Kendall Hunter out for the season, the 49ers were desperately missing a quick and shifty change-of-pace runner who could cut it to the outside. With James, the 49ers have alleviated that need. James shows a rare second gear that not very many running backs have, and it was particularly noticeable on the kickoff returns. Simply put, the kid's got wheels, and I'm excited to see more of him in the future. James finished the day with 8 carries for 30 yards and 3 kickoff returns for 79 yards.

If the Dolphins had any dream of a comeback, they were rudely awaken by quarterback Colin Kaepernick who blazed down the field for a 50-yard touchdown run right before the two-minute warning. If I didn't know any better, I would have thought he was a freshly-paroled convict. Zing! I'm kidding - please don't hurt me. Kaepernick's rushing score was the longest by any 49ers quarterback, eclipsing Steve Young's legendary 49-yard touchdown run in 1988.

It should be noted that Michael Crabtree did an excellent job sealing off the cornerback to the left which helped open the huge lane for Kaepernick to run through.

FROM ONE CLOSER TO ANOTHER 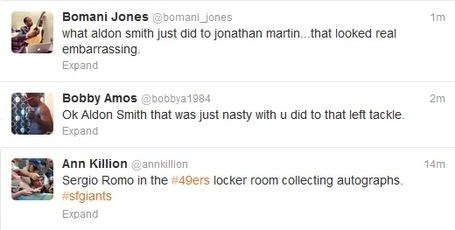 Smith has gathered quite a fan following with his prolific performance on the field. One of his biggest fans might be World Champion San Francisco Giants' closer Sergio Romo who donned a red #99 jersey on Sunday: 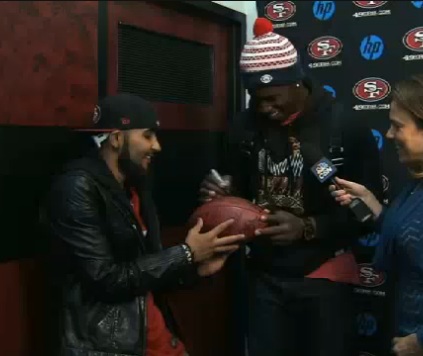 "It's just the aggressiveness, the fearlessness, the confidence that he brings," said Romo, on what he likes about Smith's game. "He knows who he is, and what he has, and what he brings to the table. You really can't match his skill set either. He's kind of a freak."

Smith reciprocated the compliment with brevity.

Next Sunday night, in what may very well be a Super Bowl preview, the 49ers travel to Foxboro, Massachusetts to face Tom Brady and the New England Patriots. If the 49ers want any chance of leaving with a victory, they'll need to find some way to slow down the league's top-rated offense.

My recommendation? Unleash the Aldon.