All-22 film: Tom Brady and the New England passing game

We take a look at the coach's film of a quick scoring drive by the New England Patriots from their Monday night drubbing of the Houston Texans.

Share All sharing options for: All-22 film: Tom Brady and the New England passing game

The first play was a good blitz pick-up and a quick strike to Bradon Lloyd running a deep out right past the first down marker. It picked up 14 yards.

The next three plays picked up 18, 13, and 37, respectively, and showcased some unique play-calling and a clearly outmatched Houston secondary - one which allowed Tom Brady to acquire a superb ANY/A of 10.25 (adjusted net yards per pass attempt - for comparison's sake, Matt Schaub managed half that: 4.79).

If the much better San Francisco secondary wants to beat Tom Brady, they cannot allow what I'm about to show you happen. If your kids are in the room, now would be a good time for them to leave or cover their eyes.

Pretty much what the title says. I like the design of this play a lot. It's the kind of play I'd like to see us run, but we never take enough deep shots for this to work. 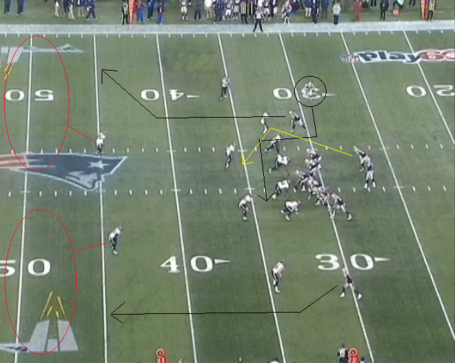 The play design is meant open up lots of space in the middle. The safeties over the top (red) are playing deep and have to account for the go-route (bottom) and corner route (top) - because if they don't, Brady and his receivers will make them pay (or should we say Belichick will make them pay?).

Welker (black circle) is in motion and is going to line up more inside and then run a very shallow in at roughly the 35-yard line. He will occupy not just the DB covering him, but one of the linebackers as well, drawing them to the left of the field and opening up more space underneath for Woodhead (yellow). 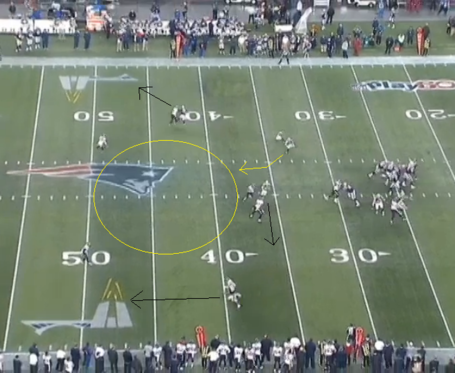 The top safety is just now figuring out that he needs to come back down to guard all that space in the middle, because Brady has released the ball to Woodhead who is a quick, shifty little dude that gives 5'10'' (on a good day), skinny, white guys like me hope that we, too, could be professional football players.

Welker is occupying his two guys underneath, and the outside routes, of course, have taken their respective DBs out of the play. 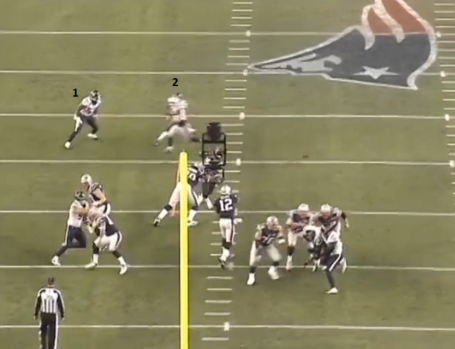 This is a different shot of the same moment. Lots of space there for Woodhead to take advantage of, and he does; taking the short dump off 18 yards.

New England followed their successful underneath pass with another intermediate attempt: a 10 yard post route off play-action that netted 13. 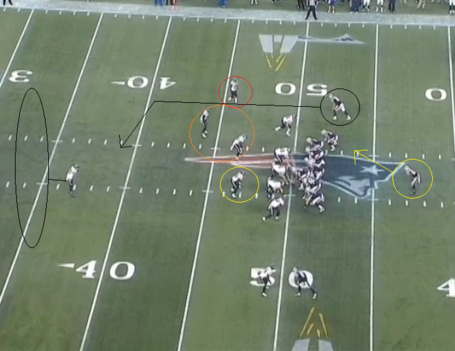 Hernandez is circled black and is running the post. The gentleman circled red is guarding him and the safety to the left of the picture is playing zone over the top.

The linebacker circled yellow is on a blitz and is completely fooled by the play-action. The two Houston defenders circled orange are also sold on the play. 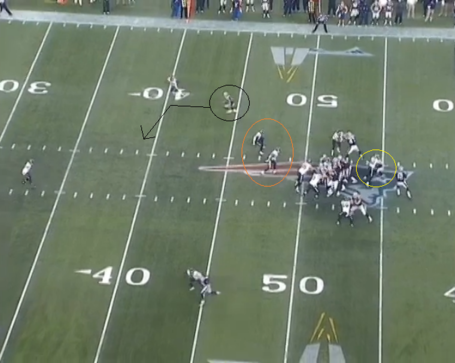 That is what is shown here. The yellow circle is the blitzing linebacker tackling what he believes to be the ball-carrier. The two defenders circled orange have given up tons of space behind them.

The safety over the top has Lloyd to worry about at the bottom of the picture and is taking steps back while the DB on Hernandez is covering deep wide because he believes he has help inside (he kinda does). But a well-timed post route is the perfect route here - much like Play #1, it takes advantage of all the space in the middle. 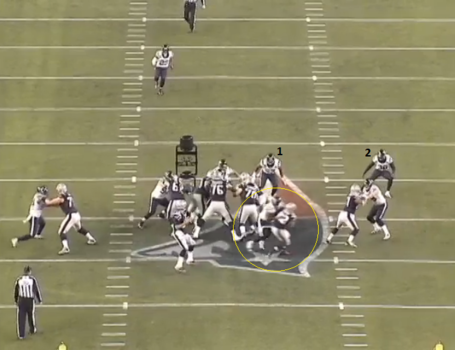 Here we have a different shot of the same moment. The linebackers are way too invested in the run play and Hernandez is off-screen, about to run into all that space to the top right corner of the still. 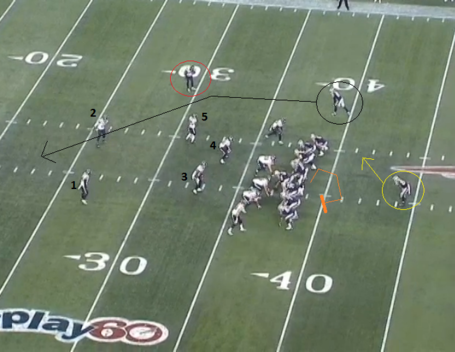 We have basically the same set up as Play #2, sans the bottom receiver. Instead, Lloyd is up top, running Hernandez's post, and the Patriots have brought in an extra linemen and even stacked up Welker to the right as a blocker/receiving outlet in case the play breaks down.

The DB (red) ends up responsible for Lloyd, but, just like Play #2, he's playing the receiver deep and outside, assuming he will have proper safety support inside. He won't.

Every Houston defender numbered - including the safeties, marked black 1 and 2 - is going to fall hard for the play-fake.

What really stuck out for me, however, is the center. After hiking the ball, the New England center will follow the play-action to his right and then run in a full circle, at one point even turning his back to the Texans defense. He will come back to the weak side to block any potential edge pass rushers. 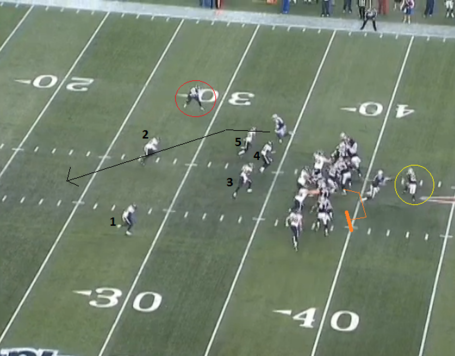 This one's self-explanatory, but I'm a voluble fellow. The black numbers are converging on the run. The red DB is in no position to cover the post and Lloyd will have a clear path to the endzone.

The play, right at this exact moment, is already won for New England. Notice again, too, the orange line. The center in this still is just now turning his back to the Houston defense. 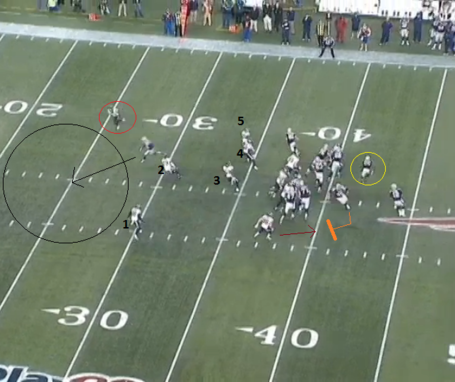 And at last we arrive. Black 2 is giving the classic over-the-shoulder, "Whoops, there goes that guy behind me!" Black 1 is a deer in the headlights. DB (red) is thinking, "srsly guyz?!"

Let's avoid that tomorrow. The only Pats I want celebrating are the ones I'm gonna post in the game thread after 49er touchdowns.