I celebrated my 23rd birthday over the weekend and had more to drink than I'd like to admit. But even in a heightened state of inebriation, I knew exactly what I wanted the most.

"You want another shot of Wild Turkey?" a friend asked.

"I WANT MY NINERS TO ANNIHILATE THE PATRIOTS ON SUNDAY," I sloppily exclaimed, pounding my fist on the bar table.

My birthday wish was granted, but it came with a bigger headache than my morning hangover.

The first score of the game came on San Francisco's first offensive drive. In just six plays and about three minutes of regulation time, Colin Kaepernick found Randy Moss for a 24-yard touchdown strike. Having spent four seasons in New England from 2007-10, including a record-breaking season in 2007, the fans were quite privy with the wily veteran receiver's ability to get into the end zone. This time around, however, the crowd wasn't cheering.

With that catch, Moss officially passed Isaac Bruce - another former 49er - for the 3rd most receiving yards of all time. 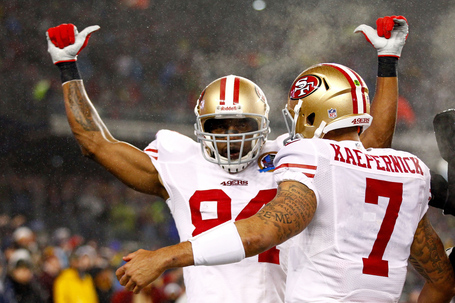 At the very least, many probably expected one of the two offenses to score fast and score early, but it wasn't the league-leading Patriots. Later in the half, Kaepernick hit tight end Delanie Walker in the end zone for a second touchdown to put the 49ers ahead by two scores. Walker ran a seam route up field alongside fellow tight end Vernon Davis. Patriots' rookie cornerback Alfonzo Dennard tried to keep pace between both of them, but his indecision left Walker wide open in the right corner of the field, and Kaepernick took advantage of it.

Kaepernick finished the day with 216 passing yards, four touchdowns, and one interception.

Perhaps the biggest factor in what many perceived as a possible Super Bowl preview wasn't any individual player on the field but rather a misty rain that permeated Gillette Stadium for most of the night. Kaepernick reportedly said before the game that the elements wouldn't affect his ability to handle the ball, but nobody bothered to ask center Jonathan Goodwin.

By my count, there were four mishandled snaps by the 49ers offense, but fortunately, none of them resulted in a turnover. One was actually turned into a touchdown. 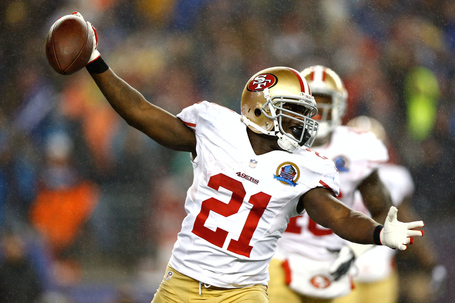 FOXBORO, MA - DECEMBER 16: Running back Frank Gore #21 of the San Francisco 49ers celebrates after scoring a touchdown in the third quarter against the New England Patriots at Gillette Stadium on December 16, 2012 in Foxboro, Massachusetts. (Photo by Jared Wickerham/Getty Images)

Early in the third quarter, the 49ers were at New England's 3-yard line. Goodwin snapped the ball into Kaepernick's hands, but Kaepernick couldn't complete the exchange, and the ball squirted out into the air. Thankfully, the ever-reliable Frank Gore had the presence of mind to scoop it off the ground and run it in for the score. However, because it was technically a fumble recovery and not a proper exchange, the score was not considered a rushing touchdown. Had it been, Gore would have passed both Joe Perry and Roger Craig as the franchise's all-time leader in rushing touchdowns.

"Last week, we didn't start how we wanted to start," said Gore. "And we told ourselves if we wanna come down here and beat the Patriots, we needed to start fast."

San Francisco got the fast start they wanted as they led 31-3 in the third quarter, but that wouldn't last long.

I'm sure many among the Niners Faithful began to toast each other on another victory in the books, but I knew better. Maybe it was my Asian intuition or perhaps it was that ill-advised second shot of Wild Turkey from the night before, but I just had a bad feeling in my gut.

The Patriots hadn't lost a home game in December since 2002 - ten years ago - and fate seemed hell-bent on keeping it that way. Tom Brady and the Patriots offense would score three touchdowns on back-to-back-to-back drives to match the 49ers at 31-31. I swear I could hear Tre Faaborg screaming at his television and furiously tweeting all the way from my house.

The stage was set for a successful rally for Brady and company, but Kaepernick and Crabtree had other plans. 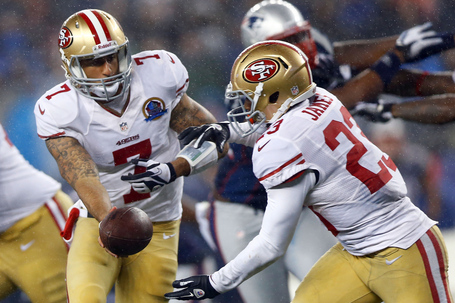 Halfway through the fourth quarter, LaMichael James made an electrifying kickoff return all the way to the Patriots' 38-yard line. Then, on the very first play of the drive, Kaepernick slung the ball left to Crabtree who hooked around cornerback Kyle Arrington and took it all the way to the house to make the score 38-31.

"Kaep trusted me, and we made it happen," said Crabtree. "[We] proved that we can win against a good offense. We can win a shoot out. Whatever it takes - that's our motto."

With a pivotal victory in Foxboro, the 49ers return home with a record of 10-3-1 and a playoff berth. However, the road to the postseason doesn't get any easier. Double-dipping on Sunday Night Football, the 49ers travel up north this weekend to face the surging Seattle Seahawks in what very well could decide the winner of the NFC West.

Kaepernick got a preview of the playoff atmosphere in New England, and he'll be tested once more at CenturyLink Field - one of the loudest stadiums in the league. The 49ers bested the Seahawks when the two faced off in Week 7, but a guy named Alex Smith was under center then. How will Kaepernick fare?