In Sunday night's big win over the New England Patriots, the 49ers had quite a game -- particularly San Francisco's free safety, Dashon Goldson.

The Niners' hawking, big-hitter made an impact by converting a fourth-down on a fake punt, as well as returning a fumble all the way inside the Patriots' red-zone. One of his big plays turned sour in the third quarter when a pass breakup was called for unnecessary roughness.

Goldson laid the wood on tight end Aaron Hernandez, which drew a flag, claiming No. 81 was a defenseless receiver. This week, the league fined Goldson for the booming hit, claiming it was his third infraction of the 2012 season.

The 49ers safety took to Twitter and was displeased, considering such a fine is coming right before the holidays. This photo is courtesy of Goldson's Instagram. 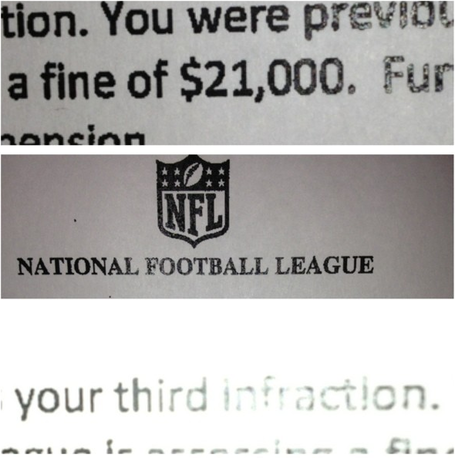 "What is a man to do. It's Xmas," Goldson said on Twitter.

Goldson has become notorious for his high-impact blows. He has established a presence in the Niners secondary, which has opposing receivers hearing footsteps. A lot of guys are cautious to come around his neighborhood knowing they could get lit up at any time.

The intimidation factor is a big part of San Francisco's defensive prowess.