Mayans 2012 prediction: Best sports memories as the world comes to an end

Share All sharing options for: Mayans 2012 prediction: Best sports memories as the world comes to an end

In case you missed it, one of random big stories this year was the reports that the Mayans had predicted the world would come to an end on December 21, 2012. I don't know how they factored in leap years, and why we consider the Mayans to be the great predictors of the world, but that is besides the point. The world will not end today, but there is always that thought that maaaaaybe there is something to this.

For me, my best sports memory is the 49ers-Saints game this past January. I realize the 49ers have had bigger moments in their history, and I've viewed several such big moments, my experience in attending this game was second to none for me. I had a press pass for the game, but the real experience was the closing minutes of regulation.

At Candlestick Park, the press has to go down on the field and then cross the field to get to the locker room for the post-game media session. That means the media heads down during the final four or five minutes of regulation. I made my way down and happened to get on the field the play before Alex Smith scrambled in for the first of two 49ers go-ahead touchdowns. For that touchdown and Vernon Davis' eventually winning touchdown, I was down right on the goal line and naturally went a little crazy.

When the final whistle sounded, I was standing on the sideline in a bit of a daze. I quickly realized everybody was walking on the field, for post-game interviews and to get over to the post-game media session. As I made my way over, I did manage to take this picture with my cell phone: 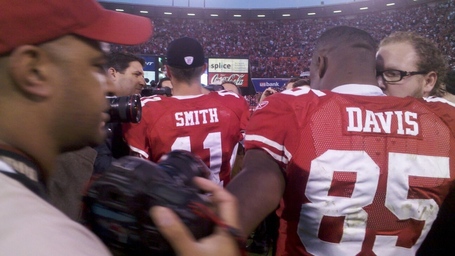 Again, I do realize the 49ers have won bigger games in their history. But my experience at this game was one that I will never forget.

You all know me from writing about the 49ers. Football has always been a part of my life, but baseball was my first love. Watching the Giants get just close enough to winning it all, while always failing massively on the biggest stage was a part of life. My mom and step-father had gone their entire lives without seeing the Giants win a World Series. It was a cyclical pattern, much like the Mayan long calendar. Every decade, when Quetzelhuatl aligns with the moon, the Giants would lose a World Series. The peaks. This would, of course, be followed by years of Johnny 'Boo' LeMaster and Atlee Hammaker. The valleys.

Things began to change in the mid-naughties. Let me take you back...Mike Jones was 'Still Tippin' and I was living in Spain. Spain, being the mystifying place that it is, has crap internet. Thus, I failed to notice when the Giants drafted a series of pitchers that would change their destiny, and mine, forever. Pitching wins championships, and the Giants assembled a pitching staff for the ages. Bruce Bochy was brought in to manage. Aubrey Huff's wife bought a thong. All the pieces were in place.

Flash forward to 2010. I'm in Australia sitting in casinos and off-track betting sites in the mid-morning (that's what time games are on here), drinking a coke in a Tim Lincecum jersey. Thankfully, the World Series that season coincided with a long weekend here in Oz and I was able to watch the Giants take four from the Texas Rangers. I always thought that Arnold Schwarzenegger would run against Hillary Clinton in 2012, signalling the end of the world. As it stands, the Giants completed the cycle that began in New York, before my parents were born. And 2012, such an arbitrary number. 2010 was the end of the world as I understood it. 2012 was just icing on the cake.

My fondest sports memory comes from the NFC Divisional round this past year between my beloved San Francisco 49ers and the New Orleans Saints. I watched the entire game at a local sports bar with a bunch of my buddies who came along for moral support more than anything else since they were all Eagles or Steelers fans. I was an emotional wreck the entire game and the round after round after round of Yuengling lagers didn't help matters much. I had done a pretty competent job at keeping myself composed until...the catch.

If you watched the game, you know what I'm talking about. 3rd and 3 with 14 seconds left, Alex Smith drops back and fires one to Vernon Davis for the game-winning touchdown. I jumped up and down, screaming like a maniac. When the cameras panned to Vernon running to the sideline with tears rolling down his face, into the arms of teammates and coaches...I lost it. I, too, sobbed many manly tears as my friends just stared at me like I was a Martian.

For 49ers fans, the last decade was nothing but grief, heartache, and disappointment, but in that single moment, it seemed as if a massive weight had been lifted from our collective shoulders. It was perfect.

I'm going to reveal both my age and my homerism with this one, but my favorite sports memory is easily last year's playoff game against the Saints. From San Francisco's early dominance, to the Saints fighting back, right down to those last few minutes - all culminating in the first 49ers playoff victory I can fully remember. Whitner's hit the biggest of the Bounty Era, and Cowboy's bull rush the studliest thing I've ever seen. Seriously think of all the epic moments in that game. It will go down as one of the most exciting in NFL history.

The final two drives remain the most heart-wrenching moments of my life (involving sports). The team drove down the field once, called a sexy quarterback bootleg out of nowhere on a 3rd and long, with Kyle delivering the essential crack-block, and Alex scored the presumed winning touchdown, only for Drew Brees to complete one miracle bomb to Jimmy Graham and have it all wiped away. I was at a loss for words. How could we be this close and have it taken from us so easily?

But then Alex Smith marched right back down the field and did it again. Who would have thought it was possible? No one. That's who. The fact that the final play was again on 3rd and 3, and Vernon was in tears, man-hugging Harbaugh on the sidelines, both immediately helped solidify the play forever in 49er lore and in my life. I'll be telling this story to my kids.

And of course the Robinson/Davis call of those last four minutes still brings tears. It was the happiest moment of my life to see us finally win a playoff game, especially with the season beginning as unassuming as it did. Us young fans don't know what a winning season feels like, let alone a Super Bowl; so winning one playoff game was the absolute best we could ever hope for - and I celebrated like it was everything.

The game sent "seismic waves through 49er land", and if the Mayans are correct and we can expect more earthquakes and tidal waves and meteors today, then so be it. The 49ers won a playoff game. The Bruins won the Stanley. I'm not a virgin. And Alex Smith proved himself to the world. I can die a happy man.

I have a lot of great sports memories that not even those pesky Mayans could ruin. In particular, watching Football with my Dad as a child. And then, the Saints-49ers game. That easily eclipsed every other Football memory I have ever had. And the best part? I watched it with my Father (and other assorted family members). But, what may be the greatest sports memory in my life, thus far, is probably when the SF Giants won the World Series in 2010. I watched the game at a local pizza place with a group of friends. The atmosphere was perfect for capping of an excellent season.