All-22: Marshawn Lynch, Russell Wilson, and the Zone-Read

We take a look at the coach's film of the Seattle Seahawks' rushing success in its third straight victory.

Share All sharing options for: All-22: Marshawn Lynch, Russell Wilson, and the Zone-Read

Marshawn Lynch and the Seattle Seahawks enter Sunday's contest on a two-game hot streak. They've outscored their opponents 108 - 17 and Lynch has 241 rushing yards on a mere 21 attempts.

Lynch has been impressive, but so has Seattle's running game as a unit. They have rushed 106 times over the last three games (@CHI, vs. ARI, @BUF) for 730 yards. Good for about 240 a game and almost 7 yards per attempt - and it's been a community effort.

328 of those yards belong to Lynch, but back-up Robert Turbin accrued 108 against Arizona, receiver Leon Washington managed 38 yards and a touchdown on 7 attempts against the same team, and Russell Wilson also has 175 yards over the last three games, including 3 touchdowns verse Buffalo.

The key to their recent success against two quality defenses and one pushover defense on the road has been the ever-increasing implementation of the zone-read. As Wilson has become more comfortable in the pocket and in reading NFL defenses, Seattle has broken it out more and more.

Sparked their offense, indeed. Aside from the 131 points in three games, Seattle's offense now ranks 4th over at Football Outsiders, and their offensive line ranks 1st in run blocking - just ahead of our own.

This is a more dangerous unit than the last time we faced them, and they will be at home, to-boot. In preparation, we break down some running plays from the 2nd quarter of their 50 - 17 drubbing of the Bills on Sunday.

The first play here is the first play of the 2nd quarter, one in which Seattle scored 17 points and utilized plenty of the read option formation and other bits of trickery.

While one would expect the San Francisco defense to be more disciplined, especially with a week of preparation in expectation of it, there are other things one cannot "prepare" for, such as getting mauled.

Trickery is nice, and it can work, but you also need to back that up with pure physicality every now and again - and I'm not talking the jumbo formation. Aside from clever second level blocking, pulling, whamming, option-running, etc., one thing the Seahawks do well that we do well is line up one-on-one every now and again and beat their guy. 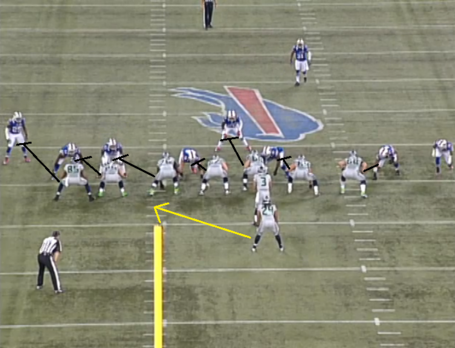 That's what we have here. Not much to draw up. No odd pulling, no mismatches created or number-games to be taken advantage of. Seattle is gonna run a play to the left end and simply create the space needed through winning one-on-one battles. 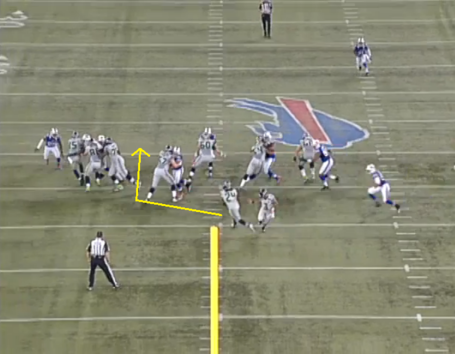 Notice every Seahawk player is on top of someone at the point of attack. Also notice the center, #60, immediately up on the second level. 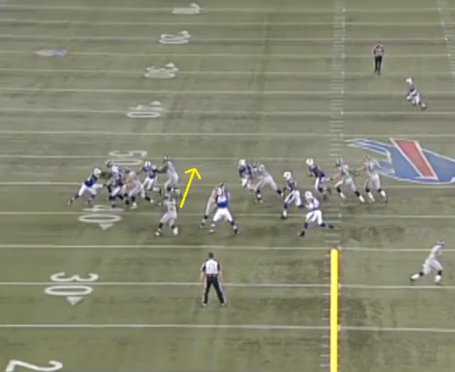 It leads to a six yard run. Not a huge gain, but a tough six yards that netted a first down and kept a drive moving along. It's steady six yard plays like this that can give space for something bigger down the field.

Seattle followed this play up with a flea flicker: Wilson to Lynch, back to Wilson, over everyone's heads downfield for 44 yards to Golden Tate. The drive ended in a field goal and increased Seattle's lead.

At this point in the game, Wilson had already run in two scores himself and rushed successfully several other times - so the Bills had to be wary of that possibility on every potential down.

Which brings us to what such wariness can do. 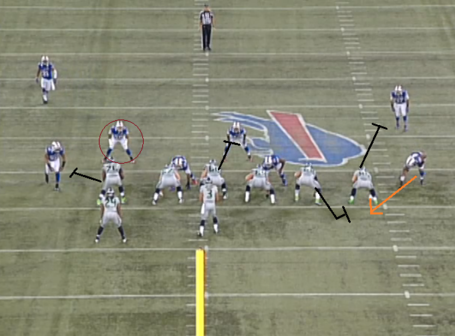 This is the formation to watch for on Sunday: your standard shotgun formation with Lynch next to Wilson. Seattle has three receivers split out wide, so the throwing threat is there and needs to be accounted for. This leaves tons of space in the middle to be taken advantage of.

The center is going to snap the ball and again proceed to the second level, just as in the last play. The linebacker (red circle) is going to, first of all, misplay the gap; but, secondly, he's going to over-react to the potential threat of Wilson running outside, acquiescing even more space in the middle. 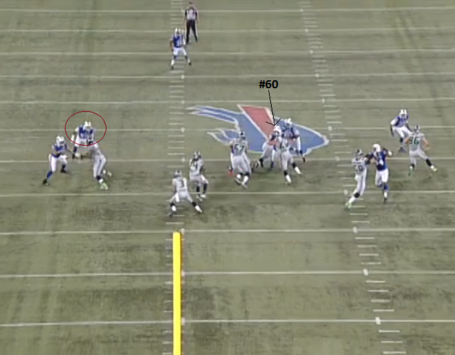 The center (#60) is a bit hidden from view, but he is in-fact up on a Bills linebacker delivering an essential block right in front of the center-field logo.

At this point, Wilson has already handed the ball off and Lynch is probably salivating, thinking of his delicious Skittles on the sidelines waiting for him.

There's a huge gap in the middle because the linebacker circled red is too concerned with the threat of Wilson, allowing Lynch all the room needed to take this 54 yards to the Buffalo 4 yard line.

The Seahawks would follow this up with a play-action touchdown to Zach Miller, who rolls out left out of a tight formation and is wide open.

We have a similar formation here. Shotgun, Lynch next to Wilson, but on the strong side this time. 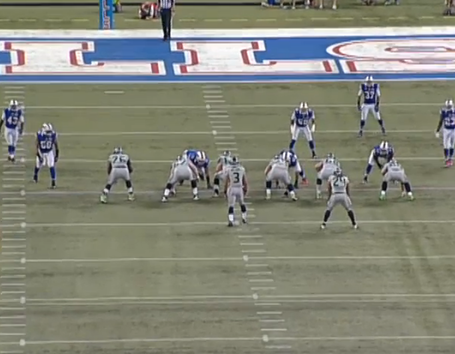 Again, to me, all the space in the middle is what to look out for. It is 1st and 20, so the Bills have let up a bit, expecting a pass; but the shotgun formation only lends more credence to that expectation - which is exactly what Seattle wants so it can run up the middle again. 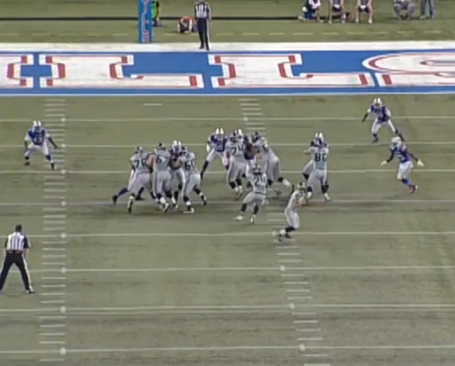 They don't quite get the second level blocking they might want here, but they do utilize the numbers advantage to maul the four guys on the line with 2-on-1 blocks. Of course, it's possible this play is designed to just pick up 7 or 8, and not 15.

And that it does. Lynch picks up 7 of the lost 10 yards back, setting up a more manageable 2nd and 13. More importantly, however, the consistent use of the formation, and the successful up-the-gut running, leads to our final play. 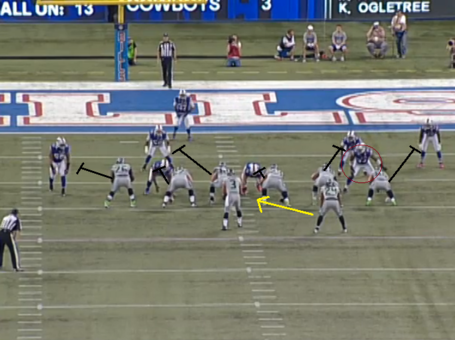 Lynch is again lined up on the strong side next to Wilson in shotgun. The center once again gets to the second level after the snap.

What's most interesting, however, is the line makes no attempts to stop #94 (circled red), who they let crash into the back-field. This, in turn, allows the linemen next to him to get up on the second level. 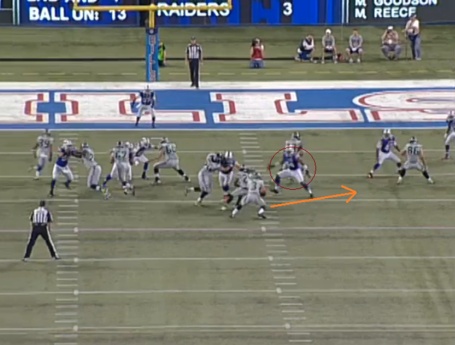 We see that here. #94 (circled red) has indeed come waltzing in freely to stop the Lynch run, but the ball is not in Lynch's hands. Wilson has pulled it back and is going to easily evade the rusher to the outside.

What's a bit cool is the Seahawks seemed to have allowed the Bills' defender to be over-committed to the middle run, which gives Wilson the space advantage outside, the momentum advantage outside (as #94 is now on his heels from rushing inside), and, now, a blocking advantage, too. 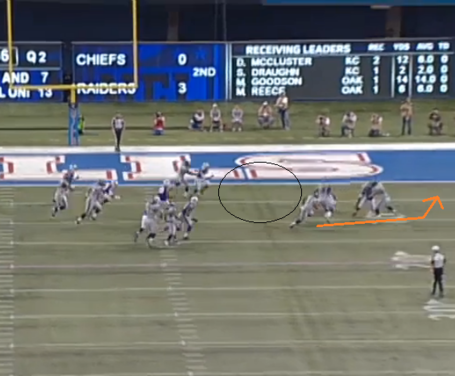 So here we have Wilson running with his two linemen in front of him delivering the key blocks on the second level. #94 is long removed from the play.

Instead of cutting it inside where a gap exists (black circle), but so do possible tacklers; Wilson shows his maturity and stays behind his blockers to take the outside gap.

He takes it 13 yards altogether, running between the pylons for a Seattle touchdown.

This is the formation and play-design Seattle has used to great success over the past three games; and the San Francisco defense will face one of its toughest challenges of the year in stopping Marshawn Lynch, Russell Wilson, and the zone-read attack.