One of my favorite things about the holiday season is being able to spend so much time with my wonderful family, and I did just that last evening. Gifts were exchanged, stories were told, people laughed, a lavish feast was consumed... My other favorite thing? Football, of course.

"Get ready to see a real team, chumps!" I declared to my family of Philadelphia Eagles fans.

I kicked back on the living room recliner like a king on his throne, a freshly-unboxed 49ers scarf around my neck (thanks, sis!). But as the game went on, I found myself sinking lower and lower into my chair, hoping that, perhaps, I would eventually just disappear completely.

By half time, my brother was bouncing his barely-one-year-old daughter Emma on his lap as my sisters cooed about how pretty and perfect she was. Then, Emma proceeded to throw up all over herself. It was a perfect metaphor. After handling the New England Patriots last week in their own house, the San Francisco 49ers were the media darlings of the week.

Fantasy football tends to create an awkward conflict of interest as was the case on Sunday night. Marshawn Lynch needed just 10 points to win me $300 and bragging rights for a year. Needless to say, I never thought I would be so pissed off about winning a fantasy football championship.

The 49ers tasted the rainbow early and often on Sunday. On the Seahawks' opening drive, Lynch broke open a 24-yard run to score the first touchdown of the game. It's worth noting that on the touchdown run, Lynch ran right by defensive tackle Ricky Jean-Francois who was playing in place of Justin Smith. Smith had previously started 185 consecutive games before being relegated to the sidelines on Sunday due to injury. 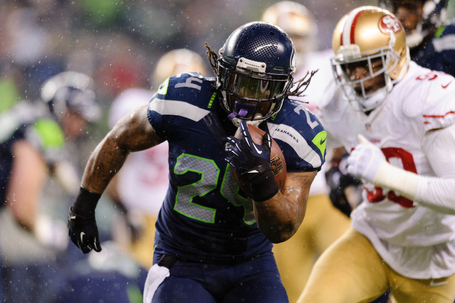 On Seattle's next possession, they would drive 86 yards down the field and do it again. Quarterback Russell Wilson passed to Lynch who rumbled into the end zone to put the Seahawks up 14-0.

Early in the second quarter, David Akers and the field goal unit lined up at Seattle's 3-yard line in an attempt to put the 49ers on the board. A chip shot, right? Akers' kick was swatted down by defensive tackle Red Bryant and returned for a touchdown by Richard Sherman. The rout was officially on.

Just from watching the game, it really seemed like rookie sensation Russell Wilson was putting on a clinic against San Francisco's secondary. Looking at the stat sheet after the game, however, I'm a bit surprised to see that he really didn't pass that much at all. With just 21 passing attempts, Wilson had five fewer passes than Lynch had rushes.

But what really stuck out to me was Wilson's uncanny ability to complete the impossible throws. Early in the first quarter, Wilson had a defender bearing down on him and was flushed out of the pocket. Running right, Wilson awkwardly launched the ball off of his back foot. "He's gotta be throwing it away," I thought to myself. It was a perfectly-placed throw to Sidney Rice who managed to land on his knee before sliding out of bounds. First down, Seahawks. 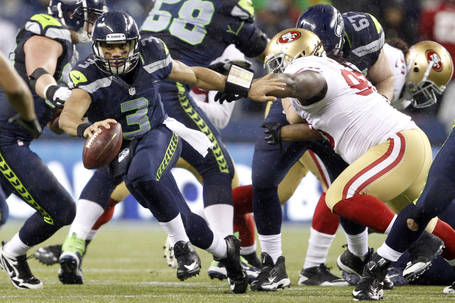 Wilson made those types of throws pretty much the entire night. Pair that with his four passing touchdowns, and he looked like he was playing on Rookie mode in Madden rather than against the league's top-rated defense.

As I'm writing this, I'm becoming more and more conscious of the fact that I'm talking more about the Seahawks than I am about the 49ers. That's because the 49ers never showed up. Matter of fact, they might still be on the bus. After unloading 41 points in Foxboro last week, the 49ers could only muster two field goals before scoring a meaningless touchdown in the waning minutes of the game.

The crowd noise was most certainly a factor - something we all expected. Colin Kaepernick was burning timeouts like Richard Sherman and Brandon Browner burn through Adderall. Kaep and company never fell into a groove and seemed uncomfortable the entire game. It was interesting that the very first play of the game was a play action pass deep to Mario Manningham. The pass was just out of Manningham's reach, but had he caught it, he probably would have taken it to the house. I hate to speak in hypotheticals, but I have to imagine the game would have played out much differently had the 49ers scored first. 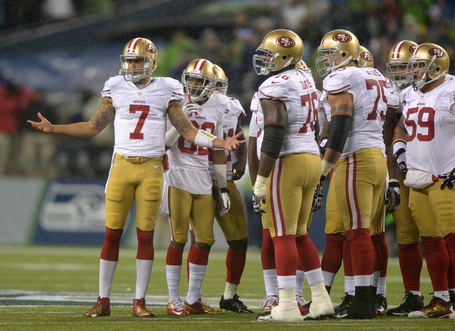 Since the 49ers were playing catch-up all night, the running game was all but abandoned. Frank Gore had six carries for 28 yards, LaMichael James had four carries for 15 yards, and Anthony Dixon had two carries for 8 yards.

Vernon Davis was blasted by Kam Chancellor who was taken to the sidelines to be examined by the team's concussion expert. Tarell Brown was forced to leave the game for a bit after falling on his shoulder. Mario Manningham suffered a blow to his knee and had to be helped off the field by trainers.

As much as the loss was humiliating, it was doubly detrimental for other reasons. The 49ers have officially relinquished the second first-round bye spot of the playoffs to the Green Bay Packers, and they'll have to rely on the Minnesota Vikings to put away the Packers next week if they want a shot at getting it back. This is assuming they'll be able to defeat the Arizona Cardinals in the regular season finale.

And while the status of injuries - namely Manningham's - is not entirely certain, the 49ers are suffering casualties at the worst possible time - right before the playoffs. The way things are looking, San Francisco will quite literally be limping into the Wildcard game when they could have benefited from a much-needed week of rest.

Is there a cause for concern? Absolutely. With a chance to claim the NFC West crown, the 49ers were downright embarrassed, but I'm not going to pull a Mayan calendar and tell you the sky is falling. San Francisco is an incredibly talented squad...they're just not as invincible as some might think they are. The sooner they realize that, the better. I just hope they figure it out before the playoffs.