49ers vs. Seahawks: What, How, Why it Went Wrong

After Seattle's blow out of San Francisco, we breakdown what went wrong for the 49ers in Week 16.

Share All sharing options for: 49ers vs. Seahawks: What, How, Why it Went Wrong

In what was probably their most disappointing game of the season, San Francisco dropped yet another game. They have totaled five non-wins in 2012, which is two more than all of last year, with one more game to play.

The 49ers (10-4-1) were blown out by the Seattle Seahawks (10-5) in an ugly 42-13 loss on prime time. But whether San Francisco lost by 3 or 30 is irrelevant; there have been traceable fallacies in their game. For one, the team has been anemic every third game, where physicality, fundamentals and coaching have all been subpar.

It did not help that the Niners were without Justin Smith and facing a hungry Seattle team on the road at one of the hardest stadiums to play at. There were a combination of factors that swung this game in favor of the Seahawks.

Let’s get down to it.

This loss does not all fall on the absence of Justin Smith, but him being on the sidelines definitely played a factor. With Smith out with an elbow injury, Ricky Jean-Francois stepped in at the right defensive tackle spot in San Francisco’s 3-4.

One thing I noticed during the game is, two or three yards make a big difference when they’re all added up. There were certainly a number of plays where Justin Smith would have turned a 7-yard gain into a 3-yard gain.

As a whole, the entire defensive line was getting blown off the ball. The unit was absolutely pounded in the trenches. That is one of the team’s greatest strengths, so when they are overpowered and bullied in that aspect, they leave themselves open to haymakers elsewhere.

That right side of the 49ers defensive line just wasn’t as effective as it could have been. Seahawks left tackle Russell Okung and Zach Miller were getting hands on Ricky Jean- Francois and Aldon Smith. They were very proficient isolating and phasing out that aspect of the 49ers defense.

There was no pass-rush coming from that side. Justin Smith would typically absorb the left tackle and left guard with his wide frame and imposing presence. Meanwhile, a leaner Ricky Jean was getting knocked around.

They also weren’t as effective rushing out of the nickel.

Justin Smith makes everyone around him better, which is why he is irreplaceable. It was clear the 49ers were missing an entire dimension of their defense with the Smith Brothers tandem out commission.

Call it a curse or whatever you will, but the 49ers have lost or tied every third game of the 2012 season. With double-digit wins this season, the Niners have failed to string together a three-game win streak in 2012.

At this rate, the 49ers will win against the Cardinals in Week 17, win their first playoff game and potentially fall in the NFC Championship game again (depending on whether they clinch a first-round bye). 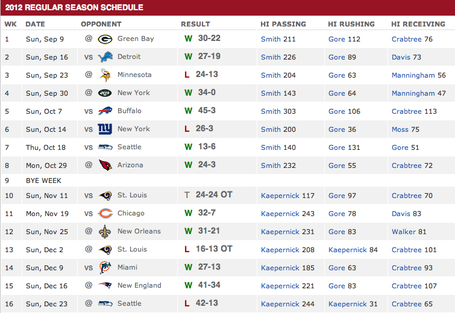 What I have seen every third game – against the Vikings, the Giants, the Rams and the Seahawks – is a significant drop-off when it comes to fundamentals, communication and play calling. They looked flat in nearly every regard, and when you go over the film of those five games, it’s hard to find more than a handful of plays that went the 49ers way. It was a case of getting outcoached and outplayed.

I cannot accurately diagnose what exactly has been going wrong in those match-ups – no one can – but they need to get it figured out by playoff time. That is not a successful team formula for a tournament-style postseason system.

In Week 16, the ‘Hawks were lucky enough to catch the 49ers on an off week.

In terms of elements the 49ers were in control of, one of my biggest issues with their Week 16 performance was the play calling on the offensive side. The Niners have been quick to throw the ball with Colin Kaepernick behind center.

While I support the move from Alex Smith to Colin Kaepernick, I still stress that offensively, this is Frank Gore’s football team. When the franchise’s all-time leading rusher is limited to six carries, it’s hard to put together any sort of relative success on offense.

As I’ve said before, the 49ers are at their best with a balanced attack. That could be said for most teams but especially the 49ers, who rely on play-action to push the ball downfield. Also, boasting the league’s No. 4 rushing attack and the No. 25 passing attack, it wasn’t in San Francisco’s best interest to go throw a ton against the No. 5 pass defense.

Greg Roman might have been a little high on Kaepernick’s four touchdowns as the team went on to outscore Tom Brady at Foxboro. The 49ers were either pressured into abandoning their game plan or forgot their identity beforehand – whatever the case, they did not help themselves.

The offense put too much on Kaepernick’s shoulders instead of putting him in a position to succeed.

Seattle is a very good ball club that does deserve credit. Coming into the season, I expected the 49ers to split the difference with the Seahawks, going 1-1 and that’s what wound up happening. There is a high level of competitiveness within these two teams, and they view each other the same.

The 49ers know the Seahawks are getting in their way, and the Seahawks feel the same about the 49ers. With Jim Harbaugh and Pete Carroll behind the wheel of these two teams, it’s become quite the annual grudge match.

However, for this to be the rivalry it was already viewed as, the Seahawks needed to win some games eventually. This was Carroll’s first win against Harbaugh in the pros in four outings. The Niners are still winning 75% of their games against the Seahawks in that time.

But on Sunday night, the Seahawks played harder and wanted it more. They played good in all three phases and did what it took to steal a win from one of the tougher teams in professional football.

Also, hats off to the 12th man once again. The crowd in Seattle was a factor, discombobulating San Francisco’s offense with their deafening fan base. Qwest Field remains one of the more difficult venues for away teams to play at in all of sports.

And the Seahawks took advantage when they had the ball on offense. Russell Wilson got the ball out quickly and bought time with his elusiveness when his receivers weren’t open right away. And the physicality by the Seahawks up front was another huge difference-maker on that side of the ball.

We know Seattle’s defense would show up, but their crowd, coaching staff and offensive players did as well.