The end of the week means NFL players officially know if they are receiving fines for on-field conduct or uniform violations. According to media reports, right tackle Anthony Davis will be fined $10,000 for "unnecessary roughness for striking an opponent late". In related news, Kam Chancellor will not receive a fine for his hit on Vernon Davis that resulted in a concussion.

Anthony Davis received his unnecessary roughness penalty on the 49ers final drive of the game. On an Anthony Dixon run up the middle, Davis took a late shot on a Seahawks defensive player. Here is a camera shot just before the hit: 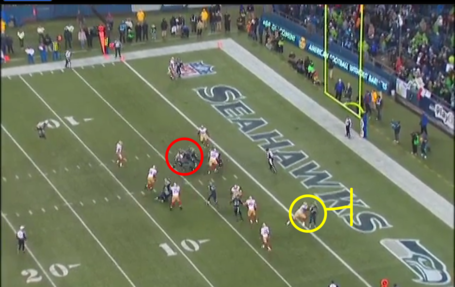 The red circle is where Dixon is. The yellow circle is Anthony Davis. He gave the defender a push there, but then the flag and fine are based on the second hit, which came two or three seconds after the whistle. It wasn't a huge hit by any stretch, but the penalty and fine are not surprising.

There will be plenty more chatter about the shot Vernon Davis took that knocked him out of the game with a concussion. The picture at the top of this post is the best view we've got. Chancellor was flagged under the defenseless receiver rule. The rule on hitting a "defenseless receiver" states:

...if a player illegally launches into a defenseless opponent. It is an illegal launch if a player (1) leaves both feet prior to contact to spring forward and upward into his opponent, and (2) uses any part of his helmet (including the top/crown and forehead/"hairline" parts) to initiate forcible contact against any part of his opponent's body

From my view of that picture and the replays shown on TV, the play struck me as Chancellor initiating contact with his shoulder. His helmet likely made contact with Davis' body, but the hit itself appeared to be initiated by Chancellor's shoulder. I know there will be differences of opinion on this.

I was not at all surprised by the penalty given the force of the play and the lack of instant replay on penalties. At the same time, the league officials doling out fines had a chance to review the play from numerous replays, as we as fans can do. It was a brutal hit, but I feel like it is the kind of hit we see from Dashon Goldson and praise as a big but clean hit.