Share All sharing options for: The Booth Review – 49ers vs. Rams: “Rams temper the hot hand”

As the football gods would have it, the San Francisco 49ers and St. Louis Rams spilled into overtime on Sunday as they did three weeks ago. This time around, however, we were spared the misery of a tie as the Rams edged out the 49ers 16-13.

At least I can be definitely pissed instead of just kind of pissed.

"That was a tough one. We're going to have to bounce back very quickly," said 49ers head coach Jim Harbaugh. "It was a football fight and we did not win it."

The lone offensive touchdown of the day came in the first quarter. San Francisco started their second offensive drive at their own 40-yard line and drove all the way down to St. Louis' 1-yard line on strong runs by Frank Gore. Fittingly, it was Gore who would capitalize on the drive by powering in the rushing score.

It was three weeks ago - against the Rams - that Alex Smith suffered a concussion that ostensibly lost him the starting quarterback job. The Rams would be the first team to see significant action from Colin Kaepernick then, and they got five more quarters of him on Sunday. 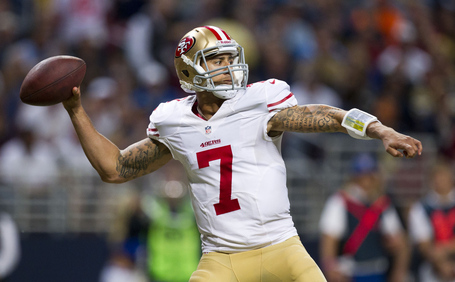 ST. LOUIS, MO - DECEMBER 02: Quarterback Colin Kaepernick #7 of the San Francisco 49ers throws a pass during the game against the St. Louis Rams at the Edward Jones Dome on December 02, 2012 in St. Louis, Missouri. The Rams beat the 49ers 16-13 in overtime. (Photo by David Welker/Getty Images)

Kaepernick played...okay. He continues to display very good accuracy and a whole lot of umph! on his throws. Watching Kaepernick over the last couple of weeks, there are always a few times each game where I catch myself mouth agape and wide-eyed. ‘Wow' moments, I call them.

On Sunday, one of them came about halfway through the second quarter. It was 3rd and 4. Center Jonathan Goodwin snapped the ball way too low, but Kaepernick cleanly fielded it, adjusted accordingly, got his eyes downfield, and fired an accurate pass to tight end Delanie Walker to convert the first down. Very impressive.

He didn't make very many mistakes, but the ones that he did make proved to be incredibly costly.

In the third quarter, the 49ers were at their own 17-yard line on first down. Kaepernick received the snap and dropped back. Rams' cornerback Janoris Jenkins and linebacker James Laurinaitis were quickly bearing down on Kaepernick who retreated into the end zone before firing the ball out of bounds to the right. The referees ruled that the ball did not cross the line of scrimmage, and as such, the 49ers were charged with intentional grounding. Additionally, because the penalty occurred in the end zone, it was ruled a safety.

Interestingly enough, Mike Pereira, former Vice President of Officiating and current Fox Sports ‘rules analyst,' chimed into the commentary for a clarification. According to Pereira, the line of scrimmage extends beyond the field which means that it wouldn't matter if the ball flew into the upper deck of the stadium - as long as it's beyond the line of scrimmage, it's not intentional grounding. During the replay, it appeared that Kaepernick's pass did indeed pass the line of scrimmage despite landing out of bounds. Coach Harbaugh had his red flag ready to go. However, since the play resulted in a score and all scoring plays are automatically reviewed, Harbaugh was not able to challenge it.

SON OF A PITCH

In the fourth quarter, the 49ers offense was in a pistol formation. Kaepernick received the ball and feigned a hand-off to Gore before pitching it backwards to Ted Ginn Jr. instead. The pitch went right over Ginn's head and onto the field - a fumble. Janoris Jenkins scooped up the ball before rolling into the end zone for the defensive touchdown. 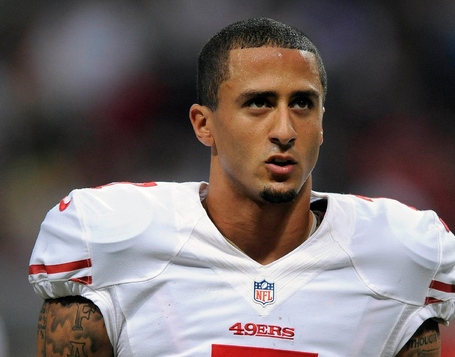 "I just pitched it high. It was my fault, all the way," he continues. "I was trying to make a play, [but I] should have played it safe. I should have just kept it, let the clock run, let our punter get on the field, and let our defense play. It was just a bad pitch."

Obviously, the onus falls on Kaepernick for mishandling the pitch, but it should be noted that Ginn's effort to recover the fumble was...something between abysmal and embarrassing. Abysmarrassing. Instead of simply falling on the loose ball or knocking it out of bounds, Ginn tried to do the alligator arms and came up empty-handed.

A CASE OF THE DROPSIES

Late in the fourth quarter, Kaepernick broke a dazzling 50-yard run. However, any momentum the 49ers may have gained from it was immediately dead in the water within two plays. On first down at the Rams' 14-yard line, Kaepernick laid a beauty right onto Delanie Walker's fingers. A sure touchdown! Niners up by seven! The turning point of th-...!

Oh right, he dropped it.

"I misjudged it," said Walker. "It barely hit my finger tips. It was a perfect throw."

Then, on the very next play, Walker was called for a holding penalty that set San Francisco back ten yards. Instead of a touchdown, the 49ers were forced to settle for a field goal to make the score 13-10.

"We got to help [Kaepernick] out as a team and make plays for him, and that's the only thing we can do," Walker continued. "Kaep was out there making the right calls. I feel like we just didn't help him out as a team."

On the other side of the ball, the 49ers played very well.

On a play in the second quarter, Aldon Smith absolutely manhandled Rams tackle Barry Richardson. With one arm engaged on Richardson, Smith was able to bring down quarterback Sam Bradford with the other. Smith's season total for sacks is now 17.5 which ties the franchise record held by Fred Dean. Additionally, Smith now has 31.5 sacks since last year which breaks Reggie White's record for most sacks by a player in his first two seasons (31). 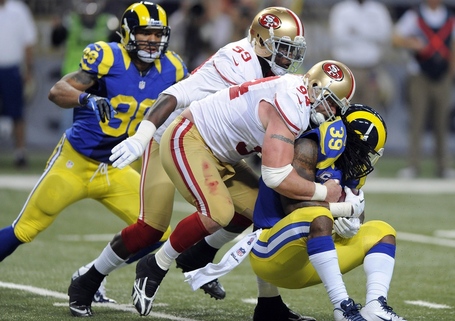 Justin Smith, Aldon's brother from another mother, had a similar play in the fourth quarter. The Rams kept running back Steven Jackson in to block, but unfortunately for Jackson, he was tasked with blocking Justin. Jackson was no match. Justin shoved him off effortlessly before bringing down Bradford using just his left arm. After recording zero sacks through the first nine games of the season, Justin now has three over the last three games.

"Justin and me have worked together tremendously," said Aldon. "He brings a lot of attention, because he's a great player, and I'm able feed off of that. We're able to just get back there and create plays."

Consider this: the Rams' offense didn't cross midfield until the last minute of the first half. That's pretty exceptional.

The Rams needed just a field goal to send the game into overtime (Yeah. Thanks, Delanie), and their rookie kicker Greg Zuerlein gave it to them from 53 yards away.

Halfway through the overtime period, Rams punter John Hekker botched one to the 50-yard line. The 49ers had a golden opportunity to put the game away. And then...Greg Roman.

This cannot be understated: the offensive play-calling on this drive was miserable. I get it. By virtue of sudden death, the first team to score, wins, and all the 49ers needed was a field goal. But Harbaugh and Roman were dialing up plays like they were completely content with a fifty-some yarder...with the streakiest kicker in the league...who was reportedly working through a pelvis injury.

Back-to-back runs on first and second downs. Short passes. Super, ultra, mega conservative play-calling. It just didn't make any sense to me. Akers was visibly sweating once he took the field for the 51-yard field goal attempt, and understandably so, because he was probably thinking to himself, "Oh shit, I haven't made a fifty-plus-yarder since 'Nam." 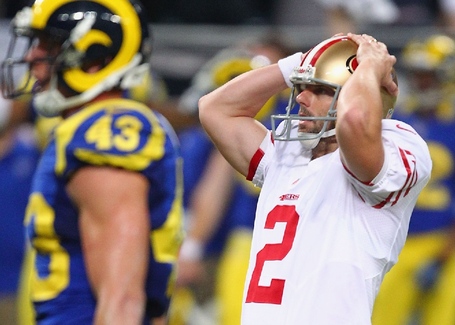 ST. LOUIS, MO - DECEMBER 2: David Akers #2 of the San Francisco 49ers reacts to missing a game-winning field goal against the St. Louis Rams at the Edward Jones Dome on December 2, 2012 in St. Louis, Missouri. The Rams beat the 49ers 16-13 in overtime. (Photo by Dilip Vishwanat/Getty Images)

The Rams got the ball back, and seven plays and 21 yards later, Zuerlein would attempt a field goal from 54 yards away and sink it. Game over.

Am I upset that the 49ers lost? Of course. But I'd also be lying if I said they deserved to win. The Rams simply played harder when it mattered the most and capitalized on some major mistakes. Besides, if the game had ended in another tie, I swear, I would have dropped onto my knees, Willem Dafoe-from-Platoon style, and cursed at the heavens.

I'll take the loss. Now, let me be bitter and angry in peace. Next Sunday, the 49ers host Ryan "RT1" Tannehill and the Miami Dolphins. Until then, Niners Faithful.