Share All sharing options for: The Booth Review – 49ers vs. Cardinals: “Star-crossed Niners win the West”

The San Francisco 49ers secured a much-needed first round bye for the playoffs with their victory over the Arizona Cardinals, but it was with a great deal of help from the Great White North. While the Niners and Cardinals did battle at Candlestick, the Green Bay Packers and Minnesota Vikings were simultaneously playing a game a few time zones over in the Metrodome.

With Adrian Peterson chasing history as well as a playoff berth, the Vikings bested the Packers with a game-winning field goal as time expired.

"That was big. Big ups to the Vikings for doing that and winning," said Patrick Willis. "My man, Adrian Peterson, is a good friend of mine, but for us, it's big. It gives up a chance to get healthier in areas. Hopefully, [we] get one of our more key guys back in Justin."

Obviously, the 49ers had to take care of business in their own house first. How did it happen?

Most of the first half can only be described as painful. I mean, it physically hurt my body to watch.

Each of San Francisco's first three offensive drives resulted in a three-and-out. The first drive was dead in the water before it even began thanks to a senseless special teams gaffe by Ted Ginn Jr. Hovering around the 20-yard line, Ginn was in a position to call and make the fair catch. Instead, he opted to let the ball go over his head where it bounced all the way down to the 1-yard line before being downed. Consequentially, the 49ers were forced to play conservative as they called three runs in a row before punting the ball away.

"It's always tough when you're starting pushed up against your own end zone," said Colin Kaepernick. "You can't open up the playbook like you want to. Once we got off of our own endzone, we were able to call some plays that we thought we could take some shots with."

And that's exactly what happened next.

It wasn't until about halfway through the second quarter that the 49ers realized there was a football game going on.

On first down, Kaepernick ran a play action and uncorked a down-field dime to Michael Crabtree for a 31-yard gain. On the very next play, Kaepernick was forced out of the pocket as he ran to the left and threw against his body before connecting with Crabtree once more. This time around, it was for a 49-yard touchdown score.

"The first play, we had an alert to Crab if we got the right coverage," said Kaepernick. "We got it. He went out there and won, turned his guy around. The second play was a bit of a scramble, but once again, he was wide open, made a great play, and got into the end zone. 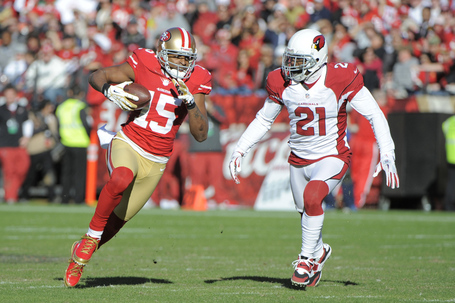 The 'Kaep 'n Crab Connection' would strike once more in the third quarter. I can't stress enough how absolutely perfect this pass was. Kaepernick flung the ball just out of reach for a flailing Patrick Peterson. The ball landed right into Crabtree's mitts who walked into the end zone for his second score of the day.

Two more Crabtree receptions I'd like to call to your attention:

These two examples perfectly illustrate something that became increasingly evident as the season went on. That is, the coaches' complete trust in Crabtree's ability and their willingness to give him the ball in crucial situations, such as third - and even fourth - downs. 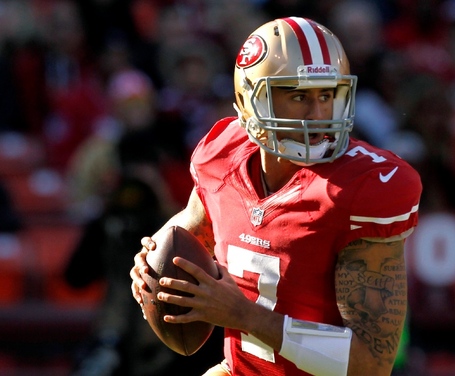 Crabtree became the franchise's first 1,000-yard receiver since a guy named Terrell Owens did it in 2003. Obviously, this has been a career year for the former 10th overall draft pick out of Texas Tech University. What did he have to say about his accomplishment?

"My dude made it happen," Crabtree said, as he pat Kaepernick on the back. Kaepernick let out a laugh as Crabtree wore a jovial grin. "I'm just goin out there, running routes, catching the ball, trying to make a play."

It took a slowly-developed 26-yard run by the shifty LaMichael James to finally get the 49ers offense rolling early in the second quarter. The very next play was a 17-yard reception by Crabtree. San Francisco drove all the way down to Arizona's 26-yard line before setting up for a 44-yard field goal attempt that, if successful, would finally put the 49ers on the board.

Two drives later, the 49ers would again find themselves driving down the field. Remember that amazing one-handed grab by Crabtree for the first down? Throw in a 12-yard run by James and a 23-yard reception by Delanie Walker. The 49ers set up for a 40-yard field goal attempt that, if successful, would put the 49ers up 10-6. 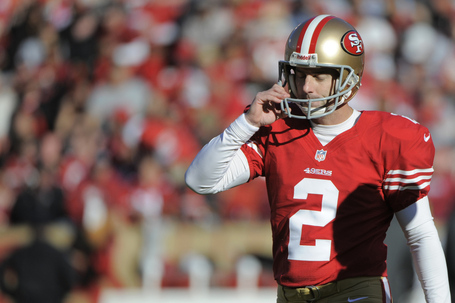 For a few brief moments, Candlestick Park was a cacophony of boos. Akers went back to the sideline, unbuckled his helmet, and hurled it against the bench in frustration.

With such an inconsistent offense, San Francisco desperately needs a sound and steady kicker heading into the playoffs. At this point, Akers seems both physically and mentally rattled. But what are the team's options at this point? Bring in an unproven kicker off the street and expect him to be able to perform in a pressure cooker playoff situation?

UPDATE (2:30pm EST): According to Matt Barrows of the Sacramento Bee, auditions (conducted by special teams coach Brad Seely) for a new kicker are underway. Some names being looked at include Billy Cundiff, Neil Rackers, Dave Raynor, and Jeff Reed.

The adage might be just as true for kickers as it is for quarterbacks - once you've lost it mentally, you've lost it totally. Akers had an All-Pro season last year. To see him struggle so much this season has been just as perplexing as it has been distressing.

"It's his job to make the field goals," said Harbaugh. "[Sunday's performance was] not to his standards."

FINAL FLIGHT OF THE PHOENIX

San Francisco eventually pulled ahead by a score of 27-6. With about five minutes left in regulation, the game was pretty much out of reach for Arizona. That's when the home crowd got reacquainted with a familiar face.

Alex Smith took the field for the first time since suffering a concussion back on November 11th. His appearance was met with loud cheers - not jeers - from the crowd. After handing the ball off to Anthony Dixon and LaMichael James on first and second down, Smith threw a pass to fullback Bruce Miller for a 6-yard gain - perhaps his last ever wearing red and gold. Despite not being enough for a first down, the stadium was noticeably boisterous and supportive of the veteran quarterback. 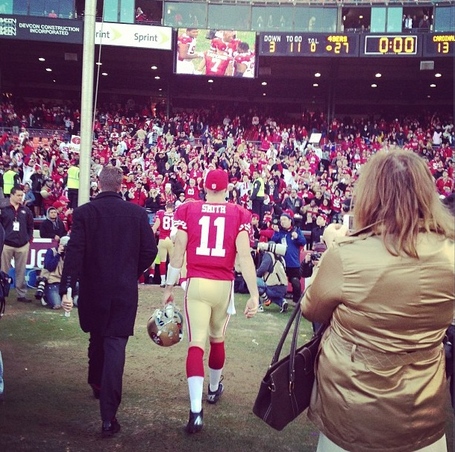 (A fantastic shot of Alex Smith walking off the field to a big ovation by the home crowd, courtesy of Matt Barrows.)

"We've been through a lot, the fans and me," said Smith, by his locker after the game. "Like I said, that almost made it that much sweeter in a sense. I've come a long way. To get that kind of response was humbling, very cool."

'Been through a lot' would be the understatement of the century. Smith has probably seen more peaks and valleys in eight years than other players have throughout their entire careers. It was incredibly heartening to see the crowd respond in such a warm and gracious manner. After all, how could we ever forget that this happened in the very same stadium?...

At first, I thought it was strange...an athlete hated by a city so much for so many years only to redeem himself in a season and half and be revered. But then I realized that Alex won't be solely remembered for the interceptions, benchings, and losing seasons. Rather, he'll be remembered for his ability to overcome such adversities and do so with impeccable class. He's kind of like San Francisco's own Rocky story, the embodiment of perseverance.

I've been incredibly critical of Alex throughout his career. Hell, I've lambasted him as recently as this season. But I've never - not once - doubted his character. I can recognize that he's a genuinely good guy, through and through, and that's something that I'll always be able to respect about an athlete.

Alex has most likely seen his last days in San Francisco and will surely be sporting different colors this time next year. Maybe he'll even be taking his new team into the playoffs. But let's not forget that, for at least two more weeks, he's still a part of this team. It's not the same role that he had in Week 1, but it's still a role, and he's both cognizant and compliant about it.

"There's definitely a part of you that wants to be out there playing, for sure," said Smith, "And that's always going to be hard, but [...] you need to be there for your team, and I have a new role, and I accept that role. Those other things are out of my control, and I do what I can to try to help this team win."

The San Francisco 49ers don't play a game next weekend, but you have to figure that coaches and players alike will be doing plenty of scouting. Between the Seattle Seahawks vs. Washington Redskins and Green Bay Packers vs. Minnesota Vikings, the 49ers will host the highest-seeded team during the divisional round of the playoffs while the Atlanta Falcons host the lowest seed.

As you ring in the new year this evening among friends and family, remember to be safe if you're going out! Until next time (and next year), Niners Faithful.