49ers vs. Rams: All-22 break down of Colin Kaepernick and early three-and-out

First up from the Rams game, we take a look at San Francisco's early three-and-out on their opening drive.

Share All sharing options for: 49ers vs. Rams: All-22 break down of Colin Kaepernick and early three-and-out

It's a Tuesday afternoon, the All-22 is up, and I have more free time to take a look at some things.

We are going to start with a look at the first three plays of our first drive on offense, because it conveniently enough shows several things that the Rams did well, and that we did not do well.

Feel free to use this thread to discuss the content of this post, but also to let us know of anything else you might want covered via All-22 from the Rams game. We'll do our best to get some more stuff up to you as the week goes on, depending on what people wanna see (admittedly, my own preferences will also hold sway).

Full Disclaimer: Most everyone here knows I am a big Alex Smith fan. Got his jersey and everything. But that ship has sailed. Alex Smith's career as a 49er is over. He will not be back next season and, barring injury or a total Colin Kaepernick meltdown, he will likely not see even another snap this season. At least, that is my opinion on the subject.

I do believe there is value in debating Smith/Kaepernick, and I do not really understand the idea that discussion of their differences should be shut down completely because "Harbaugh's the coach and he knows best." Not only is that a bit funny because we all already know that and we're just fans on an internet forum - debating is what we do - but it's doubly funny because I do not recall anyone trying to shut down debate earlier in the season when Smith was the proclaimed full-time starter. He was still very much open to criticism, and so is Kaepernick. Debate should always be welcome, and trying to prevent it online is like the 49ers trying to stop a screen play - it just ain't gonna happen.

Having said that, however, let me be clear that any acclaim I grant The Kid is not a criticism of The Phoenix, or vice versa. Like I said - as sad as I am to say it - I believe the Alex Smith story is over in San Francisco. Kaepernick is our guy from here on out, and I provide what little All-22 insight I possess in the hopes that we can understand his growth, his limitations, and his talent. I do not do it in the vain that Smith will somehow get his job back.

So if you want to debate Smith vs. Kaepernick, or what Smith would have done differently on this play or that - go ahead. Heck, I'll probably join you. But, in the mean time, I'm gonna try really hard to keep such conjectures far away from any official post I make; if but for the sake of all our sanity.

We start with our first play of the game. 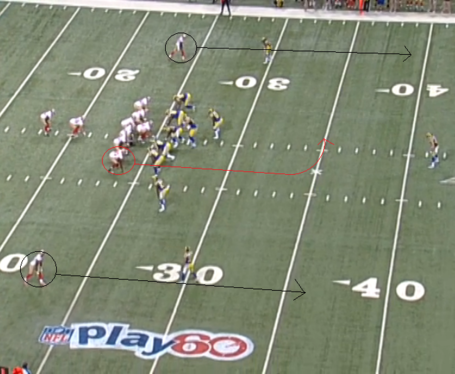 The Rams are heavy up front with almost no help over the top - but at this point teams know we don't take deep shots unless it's a corner, seam, or wheel route; regardless of who is at quarterback.

St. Louis drops back into zone coverage. One of the line backers up front shows blitz, but nothing comes of it. 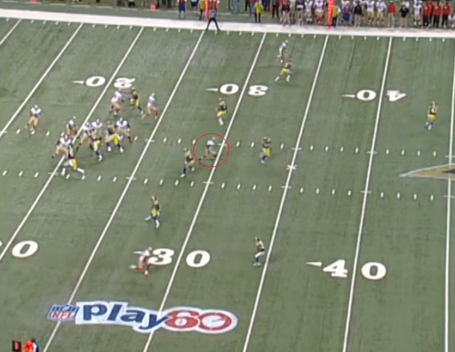 As we see, all the linebackers grouped in the middle have dropped back. The Rams rush only four and the 49ers pick it up well.

The DB on the low side is giving tons of cushion. This was another common theme, but rarely exploited by the 49ers. On this play, it's all go routes anyways, so it won't matter.

The only significant option due to the good coverage over the top is Vernon Davis in the middle. 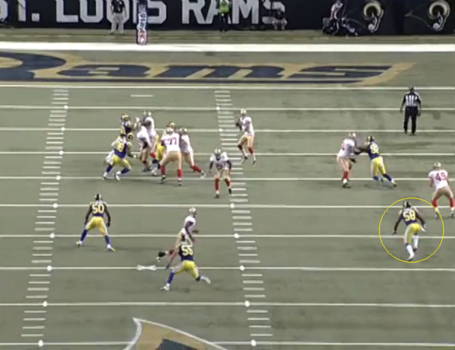 And at this moment, here, that is where Kaepernick is looking. Complete this pass and it is a first down. The LB circled yellow is not ready to cover the throw and we've seen Kaepernick thread way tighter needles than this. Davis is open despite all the inside attention, and the pocket is clean.

But The Kid hesitates on the trigger.

Seemed to me the Rams dedicated themselves often to stopping any Vernon Davis activity by loading up the middle with lots of zone coverages. It certainly did enough to make Kaep think twice. 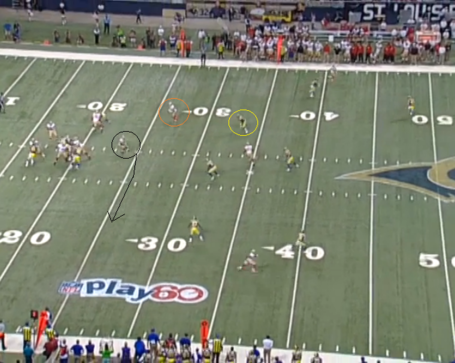 A moment later Kaep could still dump it off to Bruce Miller (orange) who flooded out of the back zone; but he looks that throw off and instead comes down to Gore (black) who is going to run along the line of scrimmage to the outside.

The throw bounces off Gore's hands - not that it mattered, though. The two defenders near Gore are ready to pounce on that route as we speak, and would have tackled him for at most a one yard gain.

This was a good example of the Rams' zone coverage causing some confusion for our young gun.

Here we have something many of us want to see for the sake of analysis: Kaepernick "killing" or "rolling" a play. It'd be nice to find more of these in the future and see what kinds of adjustments are and are not being made. 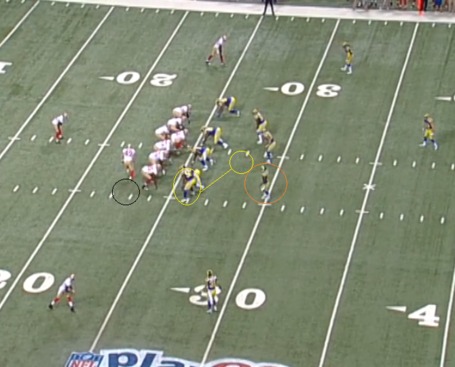 Miller leaves his original spot (circled black) to line up in front of Gore. The linebacker (yellow circle) follows him and lines up inside next to his fellow Lamb defenders (though they looked more like Lions on Sunday. Not the Detroit ones; the metaphorical... you get my point).

The safety (orange) comes all the way up the line of scrimmage to cover Vernon Davis, leaving tons of space behind him. 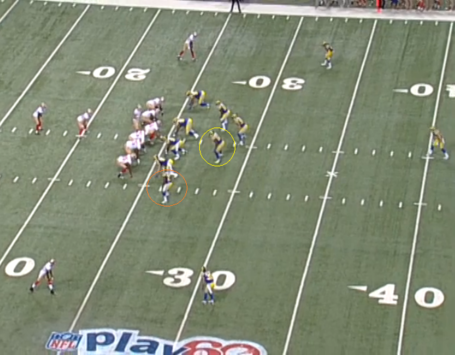 Before the snap, Kaep has a chance to "kill" the play or "let it roll" - he chooses to "let it roll", and we see that pictured here.

The safety (orange) is lined up on Vernon and the OLB (yellow) has moved inside. The Rams have a loaded box, so as to why Kaepernick decided to let this play "roll" confuses me. 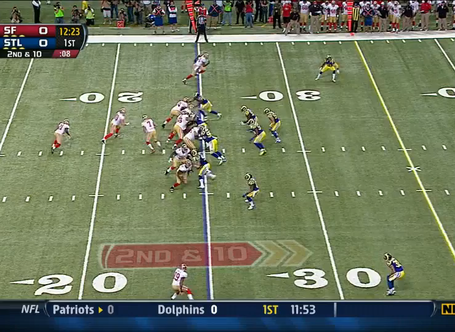 The snap comes and it's an obvious run. Or at least I assume it's obvious because look at the three linebackers in the middle.

On the other plays we have (and will, below) feature, they moved back quickly into zone coverage on the snap, but here they are selling out completely for the run, as if they know it's coming. 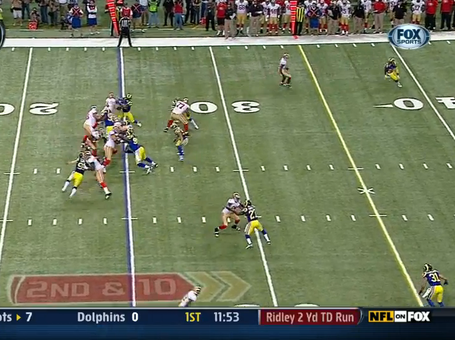 And so the play is blown up before it really begins, with Gore pictured here, crouching behind a pile of guys. He manages somehow to break to his left for a four yard gain; but that's it.

What's most interesting is if you go up two pictures, to right when the snap was taken and take a look at Ginn at the bottom of the screen. He's leaning back as if selling a quick pass that he can then take forward from behind the line of scrimmage.

Given the amount of cushion the Rams were giving us, and given the fact that the DB on Ginn had no safety help over the top (because the orange safety had come down to guard Vernon), an audible or "kill" into a quick throw to Ginn could have blown up big. He just needs to make the DB, who is already giving him 6/7 yards of cushion, miss; and it's off to the races.

Without knowing the play-call, we can't say for sure what the Niners would have "killed" into here, and we don't know how much freedom our quarterbacks have to audible at the line.

Regardless, however, why didn't Harbaugh/Roman dial up a quick throw like that later in the game? And, perhaps more pertinent to our pictures here, why didn't The Kid "kill" this play, instead of letting Gore "roll" his way into nothing?

Let's play a game. It's called, "Guess the Blitz!"

Note: Football Outsiders also happened to cover this play on the coach's film, as well as Kaep's 50 yard run in the 4th quarter. So for a more professional opinion, as well as some other interesting notes, take a look at it. 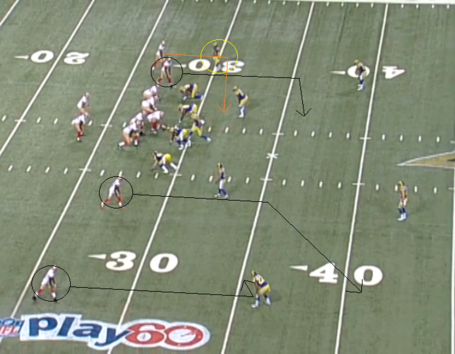 The 49ers come out in a more varied set this time, with lots of receiving options. The Rams are in their nickel package to match.

I actually like this play call a lot, as the bottom receiver (Delanie Walker, maybe?) is running a comeback right at the first down mark.

Because the Rams are (again) giving so much cushion, this play just needs enough time to develop for that route to open up. And if the DB bites, you have (Manningham?) running a corner over the top of him.

St. Louis shows blitz up the middle, but as they think the hike is about to happen, the DB guarding Crabtree (circled yellow) shows blitz instead, and the middle one backs off. They've given their actual blitz away.

The snap does not come when anticipated, so the Rams DB backs off and resets himself in front of Crabtree. 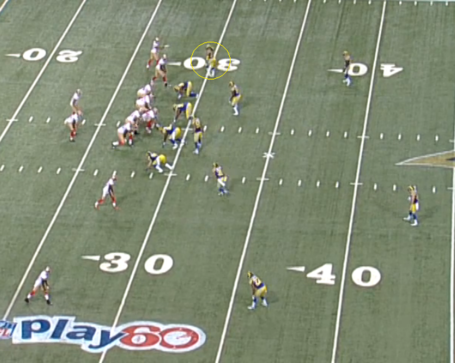 So here we have Crabtree at the top, pointing out the blitzer; but no one else really seems to notice (or maybe they JUST DON'T CARE!!!1!one!1!1!!!). No one noticed him come to the line, and no one notices Crabtree pointing him out.

Kaepernick does not adjust the protection at all and keeps Gore to his right. 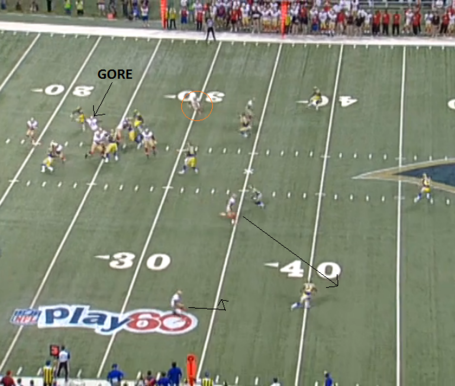 The snap occurs and Gore scrambles to his left to pick up the blitz, but that's not an easy task.

The middle linebacker and the down lineman positioned in front of him both back into zone coverage, further confusing things.

If the blitz was picked up correctly, going to Walker at the bottom would not be out of the question. Since it was not, however, Kaep needs to hit Crabtree now on the slant. It's where the blitz was coming from and Crabtree might be able to get some YAC going for a first down (though that would also be asking a lot of Crabtree given the St. Louis bodies in the middle).

As it turns out Kaep tucks and scrambles towards the top of the screen, evading the on-coming blitzer and making his way up field for a two yard gain. Not enough for a first down, but at least the sack was avoided.