49ers vs. Rams: Every first-half Colin Kaepernick drop-back plus All-22 shots

Colin Kaepernick looked tentative vs. the Rams, so I decided to go back and look at every drop-back he made in the first half and note what I saw.

Share All sharing options for: 49ers vs. Rams: Every first-half Colin Kaepernick drop-back plus All-22 shots

Watching the 49ers vs. Rams game live on TV I felt like Colin Kaepernick was being tentative in the passing game. Were his receivers covered? Was it the pass-rush? What made this "gunslinger" of a QB seem to apprehensive to throw the football?

Well I went back and watched every passing play and noted whatever I saw. I'm no coach, so take my thoughts with a grain of salt, but at least with the All-22 angle, I can see some of the coverage down field to get an idea what Kaepernick saw.

We'll break this down into a two-part series, first half in one post, then second half in another.

Here is an idea of the coverage the Rams were playing all day: 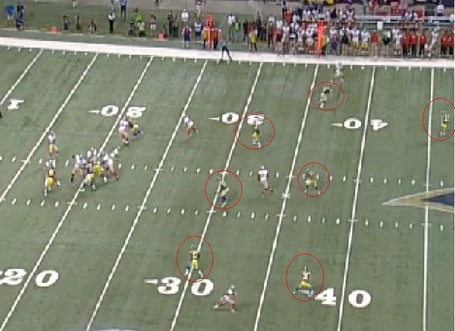 11:41 Slot CB blitz, nobody picked him up. Kaep spins clockwise and gets out of the pocket. Nobody to throw to at this point except a receiver on the opposite sideline, a risky throw across the field and definitely would have been about his fourth read, on the run. Runs out of bounds for short gain.

8:46 Rams bring five guys on a blitz and drop four back into a shell coverage. He's sacked at 3 seconds after the snap. The only open receiver is a deep route and he doesn't have time to throw it as the receiver had to clear the underneath defender first.

Here's why he didn't have time to throw the deep route. Pressure comes into his face, so he has to step to the right and up a bit. This is when he would have wanted to throw the ball had he not been avoiding the pressure. By the time he steps up, he's instantly sacked: 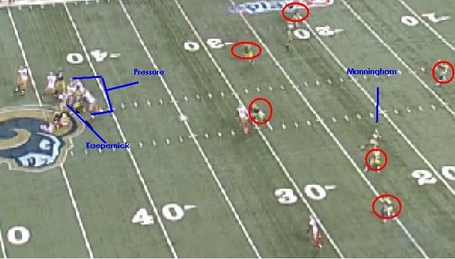 8:08 Rams bring five initially, then one drops back after a few steps. More deep shell, Kaep dumps it off to Bruce Miller for a nice gain underneath, while under pressure.

7:26 Short underneath routes planned but Rams have them defended. Kaep takes off for 7 yards and a first down.

3:40 Kaep sees the deep zone and hits Manningham on a quick slant down to the 1 yard line.

0:45 Rams again in deep coverage and all of the routes are pushing deeper and vertically. Not sure why there aren't more across-the-field routes thus-far. Moss comes back to the QB on his route (alteration) and get's a nice 16 yard completion.

13:45 Miller flexes out to top of screen, Manningham runs a come-back and catches a 5 yard pass.

13:03 Another single-back formation, Vertical routes except Manningham on the left side. Pressure forces Kaep to break pocket and run out of bounds for one yard.

8:55 Single back set initially with Miller motioning into I-formation. Kaep hits Vernon on quick come-back for 6 yards. He's taking what they're giving him quite well at this point.

4:37 Tries to hit Crabtree on similar pass but it goes through the WR's hands and up into the air, thankfully falling harmlessly to the ground. Had Walker on inside slant as well, possibly a safer throw.

2:16 21-personnel, play-action, has to step up due to edge pressure tries to hit Crabtree on outside but called incomplete. Looks like a catch, or darn close, to me. Should have probably hit Miller right in front of him.

2:00 Single back set, good coverage, pressure forces a step-up and he throws it high and outside (out of bounds) to Manningham while on the run.

We'll pick this back up in the next post, going through the passing plays of the second half.