49ers vs. Rams: Second-half Colin Kaepernick drop-backs plus All-22 shots

Taking a look at the second half of the Rams game, in particular, Colin Kaepernick's passing plays. This is part two of a two-part series.

Share All sharing options for: 49ers vs. Rams: Second-half Colin Kaepernick drop-backs plus All-22 shots

Continuing the two-part series chronicling every passing play by 49ers quarterback Colin Kaepernick in last Sunday's game vs. the Rams, we move on to the second half.

15:00 Starts out with Gore, Walker and Miller in the backfield, motions to empty set. There was really nowhere to go with this football. Bad play design on the right side with two receivers both running go routes within 5 yards of each other...essentially both were covered by one man who could make the play. Kaepernick scrambles for 6 yards.

13:34 Empty set again, Kaep tries to hit Crabtree on a comeback but throws it more like a slant, falls incomplete. Had Frank Gore open on the right side but clearly thought he had Crabtree on a slant and never looked to Gore.

5:23 Backed up deep in their own territory, Kaepernick throws a slant to Manningham for 14 yards. Also had Crabtree on comeback on right side for similar yardage.

4:36. This was the play that turned into a safety on a bad call. Two back set, play-action, deep shell coverage, yet again. Pressure busts through the middle, causing Kaep to run right, but there's edge pressure as well. He retreats backwards. Nobody is open except Miller across the field, opposite the direction Kaep is running. Hindsight says he should have thrown short of the outside receiver to avoid grounding, but Kaepernick is always trying to make a play, extend things, so he keeps running and eventually throws it out of bounds near the line of scrimmage.

Here's what he saw that forced him to break the pocket and why he had nowhere to go with the ball at that point. I suppose he could have taken a chance and thrown to the post (Crabtree) but it was pretty well covered and he had pressure in his face: 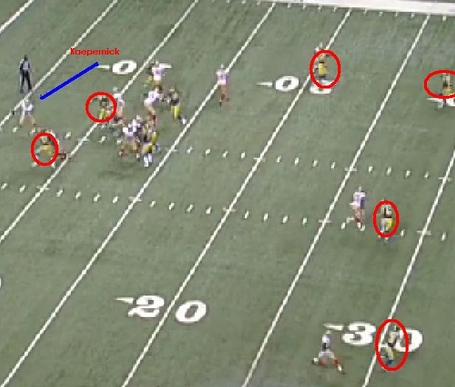 1:26 Backed-up deep on 49ers own goal-line, three players in the backfield, play action, throws a dart to Crabtree on the slant, who plucks it for a great catch and 10 yards.

0:16 This is a great throw. He made one like this vs. New Orleans, too. Throws a laser over the underneath DB's head, high, so that Crabtree has to jump to get it but the defender can't. Crab turns up field and gains 22 yards on the play.

14:18 Good pocket, throws deep right side for Walker who goes up and almost makes the catch (good placement, though). Play results in a roughing penalty for 15 yards.

12:47 Crabtree runs a corner route to the left side and Kaepernick hits him for a 30 yard gain.

12:16 hits Crabtree for 7 yards on the slant. The slant and comeback were there all day long with the soft shell coverage...and Kaepernick hit almost every one of them he had available.

11:34 Kaep rolls out left, designed bootleg, but has nobody so he throws it back across the field over Davis' head in order to throw it away. Davis was open on these "throwback" passes a few times last year, but was tightly covered this time. Randy Moss broke past the safety and had half a step on him in the end zone, but Kaepernick doesn't take the chance.

9:26 hits Manningham on comeback but looks to have had Moss running through the coverage (which froze when he cocked to throw underneath). If he'd pump faked he might have had the TD to Randy Moss. Instead it's a short FG.

2:28 Play action, avoids presssure then realizes there's nobody in front along the right sideline. Frank Gore completely upends a defender as Kaepernick scampers on his way to a 50 yard run. 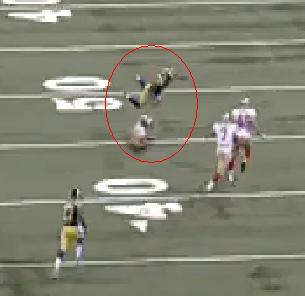 2:00 Play action, boot right, throws perfect pass on the run to Walker, out in front, hits him in the hands as he crosses goal-line...DROPPED.

10:51 Play action to Vernon Davis, who looks like he gives up on the ball even though it's not that far in front of him. Doesn't matter anyway, Daniel Kilgore called for holding.

10:44 Throws back shoulder to Moss who keeps running and the ball lands near his feet. Everyone else is half-assing their routes, so it must've been designed for Moss. Not sure the mis-communication on the route.

10:04 Shotgun, quick slant to Moss but he has no chance to get YAC with defenders all around. Crabtree would have been the better option coming over the middle, plus he doesn't fall in a heap when there are tacklers nearby...

6:14 Hits Moss on a stop route left side for 7 yards. There was nobody else open.

4:21 Dumb play, I think. Designed sprint left with only a few routes, including Crabtree comeback left sideline. Pressure in his face as he sprints left causes Kaep to hesitate and then throw incomplete.

And that's it. Those were all of the drop-backs in the game for Kaepernick. The Rams were playing soft deep shell coverage most of the game and the only routes were those that broke horizontally or diagonally to get in between the zones and give a loose window to throw. For the most part Kaep hit all of these underneath throws when they were there. After re-watching this on All-22, I can't see how Alex Smith would have somehow thrown more checkdowns and thus had a better game passing than Kaepernick did, as some have suggested since it's Smith's bread-and-butter to throw short passes.

There were only a few throws that Kaep could have made that he chose not to or didn't see. Pressure in his face and some bad play calls (routes called mostly) caused many of the incompletions, though really there weren't many. He finished 21/32 for a 65% completion rate, after all.

The biggest thing I came away with after this exercise was that the coaches have to call some better plays against this sort of coverage.