San Francisco 49ers: Historically Efficient on Both Sides of the Ball

We introduce a new efficiency stat: yards per play differential; and take a look at how the 49ers stack up.

Share All sharing options for: San Francisco 49ers: Historically Efficient on Both Sides of the Ball

This year's squad has been doing some truly amazing things. When you consider all the talk before the year began that this season was going to be a huge disappointment - with the team perhaps even finishing below .500, getting to 8 wins already, with 4 games still to go, ought be to seen as a huge success.

Stat people everywhere have been clamoring to understand what it is Jim Harbaugh is doing right, and how he's been able to lead our personal Titanic through the cold Atlantic waters without hitting the icebergs of regression that left Detroit ship-wrecked this year, and Tampa Bay clawing for air in 2011 (metaphors aren't my strong suit when I pull an all-nighter, okay?).

I'm not here to today to tell you how he's done it, except that he's Jim Harbaugh and that's how he rolls. I'm just here to introduce to you a new efficiency stat: yards per play differential (YPPD).

Basically, it is a simple measure of total team efficiency, as it takes a squad's offensive yards per play and subtracts from it their defensive yards (or yards given up) per play.

I do not claim to have invented the stat, but I do claim to have independently come up with it. One has to be pretty sure that somewhere, at some point, someone else before me has done correlation work on YPPD, and stats may even exist in the dark corners of the interwebs detailing this team or that team's YPPD.

But is there any site that has every single NFL team's YPPD dating back to 1978?! Now there is! With a simple click of your mouse, all that data can be yours!

Some teams are quite effective at moving the ball in the air; others on the ground. Others can move the ball decently enough all together, or well enough in one specific area that it compensates for the other, that they manage at least 6 yards per offensive play. Only 43 teams since 1978 have done it.

Those teams, however, rarely have a defense to back up their offensive prowess. Some even have a defensive that manages to do worse. Since 1978, 77 teams have managed a defensive yards per play of less than 4.5; with only 22 existing in the last 15 "offense heavy" years.

None of the teams on the first list also appear on the second (well, except one), meaning many teams, as we already know, fail to play complimentary football.

So what if we wanted to measure which teams were most complimentary, or most balanced? By taking a team's offensive YPP and subtracting from it their defensive YPP we get such a measurement of total team efficiency on a per play basis.

And, as it happens, such a stat is very well correlated with winning.

In a game now dominated by passing attacks and aerial efficiency, it is nice to see total team efficiency still be rewarded. The higher a team's YPPD, the more games they typically win.

Here's a fancy chart you can access in the Google document I linked to above. It's from the 2007 season, where YPPD correlated quite well with season wins, so it's useful for illustrative purposes. Plus, it looks cool: 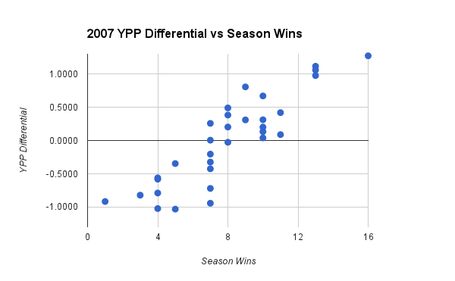 Being balanced, or at least effective enough in every phase, matters. And the more effective a team is as a whole, the more likely they are to win games. On top of that, at least to a certain extent, they also have a pretty good shot of making the Super Bowl.

Over the past 20 years, every team that posted a YPPD of at least +1.0 managed a 10 win season (except the 2010 Chargers). 10 wins typically gets you to the postseason dance, and a balanced team can help take you all the way for a shot at the Lombardi Trophy:

Where The Niners Rank

Dating back to the start of the 16 game season (1978), San Francisco is the only team in NFL history to average at least 6 yards per play on offense, and give up less than 4.5 on defense. So they are the only team to make it on both of the original lists referenced above (though, they are hanging by a thread to that offensive mark after last Sunday's performance).

For the time being, the 49ers possess a yard per play differential of over 1.5 - good for first in the league by a considerable margin.

Where does that rank historically? After calculating the YPPD of every team since 1978 (which, again, you can access here), we have an answer.

Included in the spreadsheet is a page on the best yards per play differentials of all time: 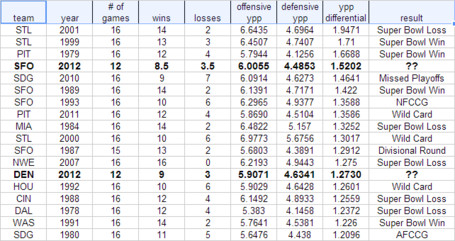 Two of them joined the list this year: our own 49ers and the Denver Broncos.

As you can see, San Francisco currently boasts the fourth best YPPD of all time, with the three in front of them all making Super Bowl appearances.

Of the 16 already on the list, 9 made the Super Bowl, and 4 won it. Could this year mark a clash between Denver and San Francisco in New Orleans?

At the very least, I personally find it remarkable that the team has managed this kind of historic season despite all the heavy signs pointing towards regression.

San Francisco has regressed in turnovers, on both sides of the ball; and special teams have taken a hit. Injuries seem to have hit us hard these past couple of weeks as well; and one of the best rushing defenses of all time in 2011 has taken a small step back, too.

But what we lost in run-stopping dominance, we gained in a new-found coverage effectiveness. What we amassed in injury regression, we made up for in depth (I hope). And any field position advantage we lost due to a lack of turnovers on defense, more turnovers on offense, and a less Pro Bowl calibre kicking unit, we gained in total offensive and defensive per play efficiency.

Our historic yards per play differential is not just impressive, it's the trump card to every pre-season bet on our regression.

We'll see how much further it can take us. Until then, enjoy the data.