All-22: The Rams' LBs Know Something

The coach's film grants us a look at what the Rams' linebackers were doing on Sunday that enabled them to be effective in both run-stoppage and coverage.

Share All sharing options for: All-22: The Rams' LBs Know Something

Fooch's Note: After you read this over, the discussion has moved HERE

The Rams' defensive front managed to give the 49ers trouble all day: accruing three sacks, several pressures and hurries, and forcing Colin Kaepernick to escape the pocket often.

They did this with a combination of zone blitzes and, at the right time, all out blitzes with man coverage deep on the outside - as if they knew the receivers were running go-routes - and tighter coverage on Vernon underneath (who was, in these instances, running routes as a blocker out of play-action).

The blitzes varied, but San Francicso was consistent in its lack of good play-calling to capitalize on all the space underneath.

When Kaepernick did have success passing, it was often due to quick three step drops and getting the ball out fast. It neutralized the Rams' blitz, made their zone coverage irrelevant, and got the ball into our play-makers' hands - leaving us to wonder why we did not call more three step drops.

The offensive line did not so much struggle in protection, from what I could see, as much as the Rams consistently had good coverage over the top when we passed and were exploding on us down-field when we ran. Kaepernick would drop back and simply have nowhere to go with the ball, or Gore would have nowhere to run.

When the Rams sent all-out blitzes, The Kid felt pressure right away, but he was often left without any short routes as a safety net. It seemed to me that often-times Kaep's only "safety net" was a checkdown underneath - but coming out of play-action, that takes time to develop.

After the game, there was a lot of speculation that the Rams knew what the play-calls were based on certain personnel groupings and alignments. Given that the Rams used so much versatility in their linebacking corps, we took to the All-22 to see what exactly the Rams' LBs were doing.

Upon watching every snap, I can say with some certainty that the Rams' linebackers knew what the 49ers were going to do before they did it. I cannot say how they knew this. Maybe it was a linemen tell, or perhaps they keyed in on a certain player. Delanie Walker is often on the field lining up in weird ways; so maybe there's something in that? I'm not sure.

But it seemed clear that, if the play was a pass, the Rams were backing off into coverage right at the snap, regardless of any play-action fake. Given how often we ran play-action, there were only a select few times where it actually fooled anyone.

And if the play was a run, the Rams' LBs were creeping in and/or otherwise not taking steps back. The only thing that sometimes caught them off guard was which way the run was going - but when we ran it, they always knew before-hand.

Below, we provide some stills that will hopefully illuminate the points made above.

NOTE: For more All-22 coverage, I recommend Tre's two part break down of every Kaep passing play here and here. You can also take a look at my breakdown of our first offensive series here.

And if you're afraid you'll miss future All-22 pieces, think about bookmarking the 49ers Film Breakdown page, where all coach's film posts are kept nice and organized.

The plays featured here I am not going to "break down", as much as provide a still and say: "Look at the linebackers." But this play is an exception because of something interesting that happened. 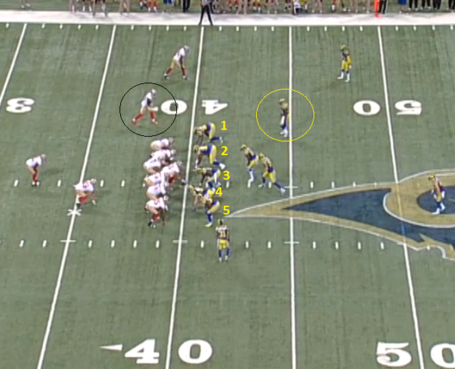 Delanie Walker (black) is the guy to key in on. The DB over the top of him (yellow) is already sneaking inside, as if he has a sneaking suspicion that Walker is not going to be lined up outside for very long.

All the other Rams' defenders on the line are numbered for reference purposes. Notice #5 lined up on Vernon Davis, with the rest going up the picture. #3 is on top of Jonathan Goodwin. 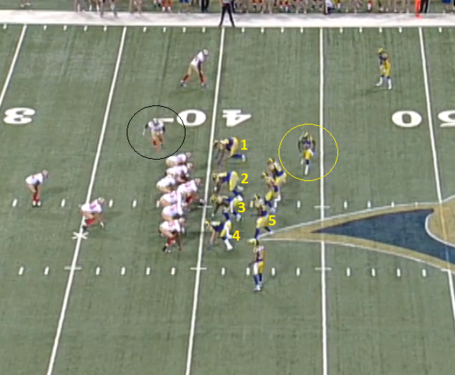 Here, Walker (black) has taken about two steps. The DB who was "guarding him" is already more inside than Delanie is. He anticipated the shift. Nothing too crazy there; but then you take a look at the line and notice they've all already shifted, too.

In the time it took Delanie to begin his motion, #4 is now lined up on Vernon, #2 is on Goodwin, and #5 has stepped back a couple steps.

Watching it in real time was even stranger. Kaepernick stomps to signify the motion and the entire Rams' defensive front shifts a split second later in response. They've already anticipated Delanie to line up on the strong side.

Now, this play actually was our biggest run play of the game. The 49ers run a counter, which was really the only way we had any rushing success against the Rams. The LBs cheat a bit towards the strong side and then Bruce Miller pulls weak from the backfield.

The LBs recover fine and probably should have made a play, but Gore follows Bruce through a tiny hole and manages to break an arm tackle and take the ball 23 yards.

This play is still featured here because, one, the Rams never even acknowledged the idea that this could be a passing play. They sold for the run the entire time. And, two, perhaps there's something to the way Delanie is used that gave the Rams an edge. Not sure. 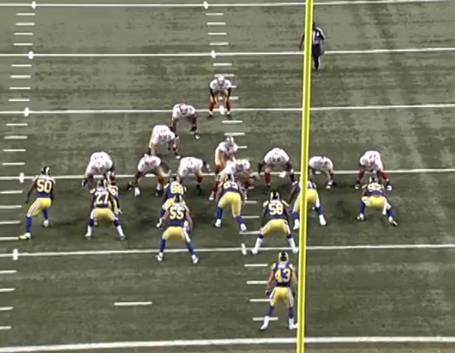 Guess where this play is going?

If you guessed stage right, you would be correct. But it gets better, as the 49ers pull Mike Iupati (left guard) after the snap and bring him to the strong side, just in case there aren't enough bodies over there already.

Not much for the Rams' LBs to "read" here. I am not sure if the goal of these jumbo sets is to make the defense out-think themselves, or just maul them over - but neither goal is being accomplished.

Maybe we're gonna randomly run a naked bootleg out of it in the Super Bowl for a 30 yard touchdown and we'll mutter in unison, "It all makes sense now."

For the rest of these, just keep keying in on the Rams' linebackers. 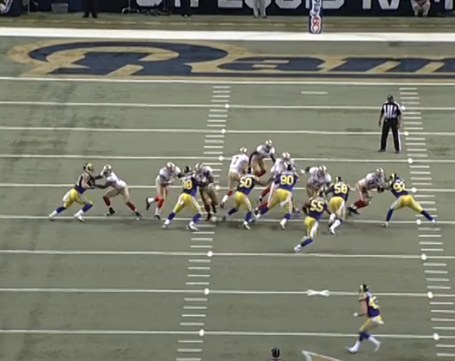 Selling out for the run here. And a run they will get. But what the 49ers should have done at least once is pull back out of a strong side run with play-action and shoot a quick dart over to whoever this guy is: 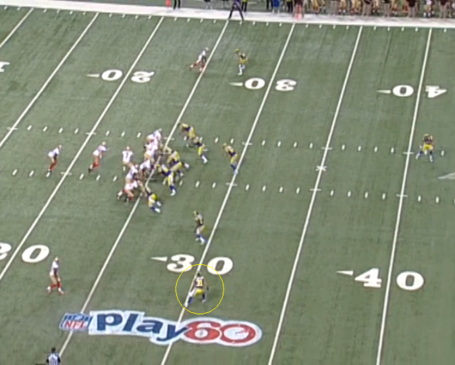 Look at all the space #31 (yellow circle) is giving. This was a common theme, and yet rarely exploited. 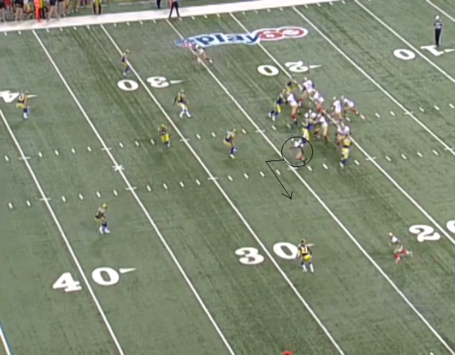 This play-action is not sold very well, but the important thing to note is, again, the Rams' LBs. They've already taken steps back into coverage right on the snap. They are not concerned at all with the thought of a Frank Gore handoff.

Luckily, this play was actually drawn up to take advantage of space underneath. But when Harbaugh/Roman dialed plays like these up, it felt like happenstance as opposed to a clear decision to take what the Rams were giving them.

Vernon is going to run a quick out. Kaep is already looking his way. It's a quick drop, play-action pass to an underneath route. The play picks up six.

This was one of the rare instances where we fooled the Rams' LBs. 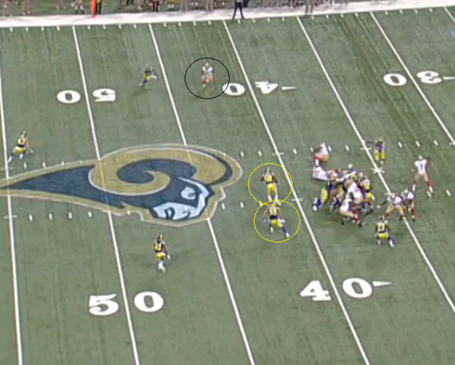 It's a play-action throw to the weak side. Crabtree (black) is running a quick slant. Kaep takes a quick drop and throws it. No need to worry about the pressure or the zone coverages or anything. Just hike, fake, throw.

The Rams' LBs (yellow circles) were pretty sold on the play-fake, as Kaep and Gore did a good job playing the hand-off tight (something they did not always do - a lot of the play-action in the game was sloppy, which could have contributed to the problem).

Play #6 - You should run the same play twice, once in a while 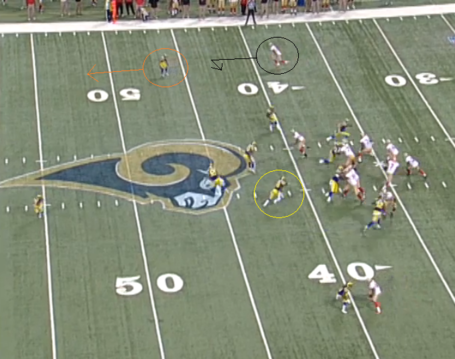 Crabtree (black) is going to run a curl about five yards up field. The DB on him (orange) is going to give tons of space.

Kaep hikes and sells the play-action to Gore, not that the Rams LBs care. One of them (yellow) is on a blitz, and the others are backing off into coverage. They are not concerned with the play-action at all.

Our other two receiving options are running deep, and the coverage is good. The safety is sneaking over to the bottom of the screen and, as was common in the game, Vernon is receiving tons of zone coverage attention in the middle.

What happens here is the DB (orange) on Crabtree is actually going to run way back and even sneak a bit inside to guard the Vernon seam-to-corner route. So Vernon is drawing four guys his way.

This leaves Crabtree wide open without a guy around for at least 10 yards. After the deep routes are a no-go, Kaep turns Crabtree's way and tries to get a pass off just as the blitzing LB (yellow) is about to hit him; but the pass is low and hits the grass.

Was the safety Kaep's fault? Well, sure. Partly. You should never retreat 15/16 yards into your own endzone. But by this point in the 3rd quarter, the 49ers knew what the Rams were doing as much as the Rams appeared to know exactly what the 49ers were doing.

A mixture of blitzes and lots of zone coverage. After just completing a 14 yard quick slant pass to Manningham to get us out of our own end zone, one might think the 49ers would come back to that idea. But no. 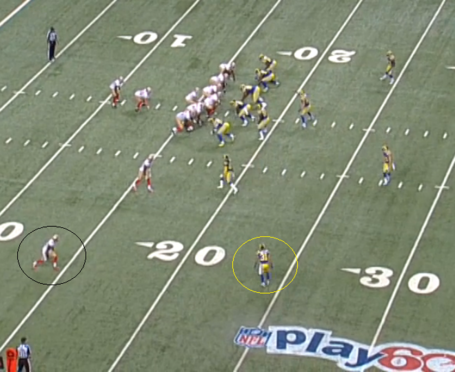 Your first thought when seeing this is probably, "Hey, this is the same picture from a couple stills ago." Well, it's not. It's just the same absurdly soft coverage.

The 49ers run play action here, but the Rams are once again blissfully unaware. Instead, they are on an all out blitz.

The corner guarding (who I assume to be) Crabtree is already sneaking in. The Rams send the house and after the play-action Kaep is met with a bunch of yellow-and-blue in his face. He runs away and tries to get a throw off but there's no one to go to by that point. He winds up taking an intentional grounding in the endzone.

This play sort of goes to the heart of the idea that our offense is too predicated on trickery. This whole games goes there, but this play does in particular.

If Kaep was not running play action every other down, he would be able to just hike the ball, see the blitz, and throw to where it is coming from. But that is kinda hard to do with your back turned.

Instead of responding to constant pressure and Cover 1, Cover 0 with slants and quick throws, the 49ers stuck to their inept game plan of play-action throws that forced Kaep to look for something deep, first, and then come underneath, second.

And then give credit to Jeff Fisher and the Rams for seeing something on film and playing lights out defense. They rarely even acknowledged our play-action, always played strong against the run because they often knew it was coming, and were never made to look undisciplined - they were never "tricked."