Alex Smith And Jim Harbaugh: A Bromance For The Ages

Share All sharing options for: Alex Smith And Jim Harbaugh: A Bromance For The Ages

The 2012 AT&T Pebble Beach National Pro-Am wraps up this afternoon down in Monterey. The Pro-Am is famous for pairing celebrities with professional golfers through the four day tournament. In addition, there is a Celebrity Challenge on Wednesday and the 49ers and Giants engage in a shootout for charity on Tuesday.

All of this week's festivities provided yet another opportunity for Jim Harbaugh and Alex Smith to continue building a bond that dates back a year now. Shortly after Jim Harbaugh became the new head coach of the 49ers, he began to engage Alex Smith to see whether he wanted to be back with the team and also whether Coach Harbaugh wanted him back. They reportedly threw the ball around a bit before the lockout and generally took some time to get to know each other. He stopped by the hospital when Alex's wife gave birth to their first child and he was quick to praise Alex over and over again in the media. It reached a point where the league even issued a warning about it during the lockout.

The Jim Harbaugh-Alex Smith bromance started to take shape last year, but now that they don't have to worry about things like the lockout, it can fully bloom. Alex Smith joined Jim Harbaugh at the 49ers-Giants charity shootout and subsequently served as Harbaugh's caddy on Thursday of the National Pro-Am. They also apparently car-pooled down to Monterey from the South Bay I've posted a few pictures after the jump courtesy of @49ers and @attpbnproam. Unfortunately no pictures of them rocking out to a mix on the drive down.

It is worth noting that Coach Harbaugh said that in exchange for Alex caddying for him this year, Coach Harbaugh would caddy for Alex next year. Most expected Alex Smith to return in 2012, but this would seem to further ram home that point. Assuming Alex does re-sign with the 49ers, it is at least good to note the great relationship between coach and player. There is plenty for Alex to work on this offseason if he wants to take another leap forward. However, having that strong relationship with his head coach forms a solid base to build upon. Whether he does take a step forward remains to be seen, but things are at least moving in the right direction. 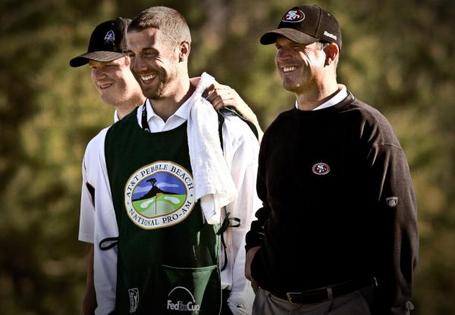 Alex Smith lining up a putt for Jim Harbaugh 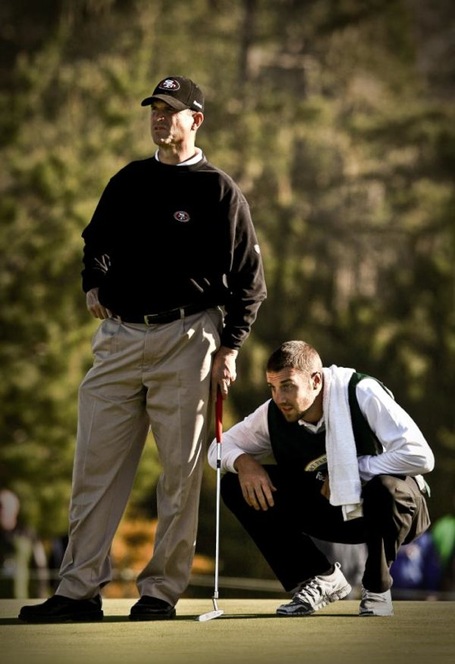 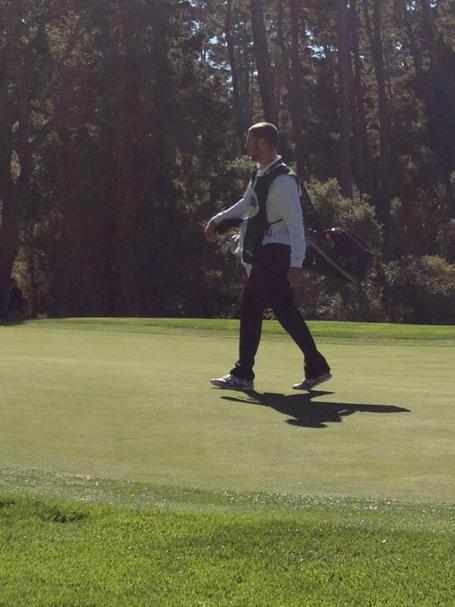