Today in reading up on my Twitter feed I discovered something interesting. Mike Sando of ESPN retweeted Darren Rovell from CNBC saying that a Seahawks blogger (actually from Field Gulls, a fellow SBN site) had broken the news due to being on the same red-eye flight to Miami with Smith.

I then saw Evan Silva (RotoWorld, PFT) retweet someone mentioning that this Seahawks blogger, Davis Hsu, had an interesting timeline of the flight on his Twitter feed. So I read it.

Hsu was respectful in not going and waking Smith up (he "reported" Smith fell asleep around 3AM) or taking a flash picture of him on a pitch-black flight, in first class...front row no less. Still there were plenty of doubters that Hsu had to respond to who thought he just wanted to play journalist.

He noted how "big and athletic" Smith looked, "every bit of 6'5" and even went on to say that based on appearances he could see why teams fall in love with prospects when they see them in person. Smith was reportedly wearing a grey T-shirt, black warmup pants and athletic shoes (confirmed by a paparazzi-style photo taken at the Miami/Ft. Lauderdale airport).

I am on flight right now (red eye) from San Francisco to Miami- QB Alex Smith is sitting in first class- you connect the dots.

Hilarious was 49er fans telling me to take a pic to prove it- it was 3am, totally dark and Smith was crashed out like champ...

@ming_lw it is him- i watch football- i watch the NFC west- it is him- grey t shirt, short hair, black pants, athletic shoes- looks 6-5 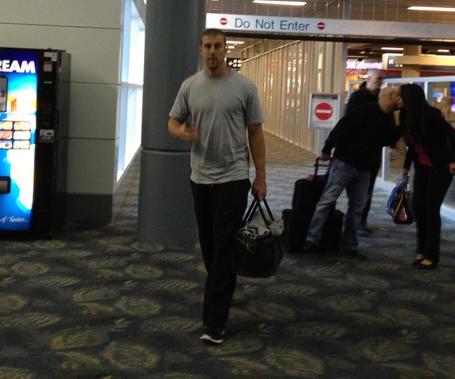