Share All sharing options for: "Bounty Gate" Evidence: The Highlights

Unless you were living in a cave, you're probably aware of the release of some of the evidence against the Saints for the bounty program. I've read through the material , and have grabbed the relevant bits.

There's about 200 pages worth of material, but maybe 10% of it is relevant. Apparently in the NFL's presentation they also included video of some of the games, as well as some recordings. In addition they included a report by Mike Triplett of the Times-Picayune discussing the bounty program with Scott Shanle (Saints LB), as well as a blog post by Sean Pamphilon explaining the timeline of the release of the locker room speech he recorded).

Both of them are worth reading in their own right (the blog post is very long, but incredibly powerful), so I'll just leave a link here to them.

When You Kill the Head, the Body Doesn't Die (Sean Pamphilon blog)

You can look at the evidence here and here. They're pdfs and they're scanned in sideways, so just right click and rotate clockwise/counter clockwise as needed (someone at the NFLPA wasn't paying attention I guess).

Key pieces of evidence so far.

It's hard to deny something untoward was happening when listening to the audio of the pre-game speech vs the 49ers. Specific instructions to go for previous injuries, instructions to deliberately go for the head, and especially the line "Kill the Head" in reference to going after Alex Smith.

Statements made by Gregg Williams

During interviews with the league Gregg Williams apparently told the investigators that he knew "he was rolling the dice with player safety and someone could have been maimed" Hard to ignore that comment in light of the other evidence that has come out.

I'm going to pick out the key pieces here--most of it was very badly done Power Point presentations, including some horribly cheesy motivational quotes. 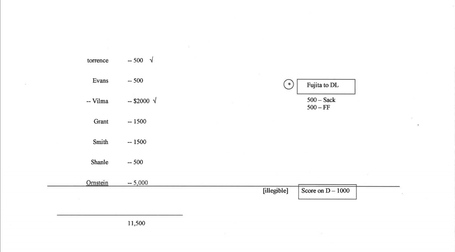 This first image is of a ledger showing payouts for performance bonuses. On the left hand side are the payouts to the players, on the right hand side are the amounts donated to the program. We can see that Fujita donated $1,000 to the DL. Four players got bonuses in excess of $1,000 with Ormstein getting $5,000. This is apparently a handwritten ledger. 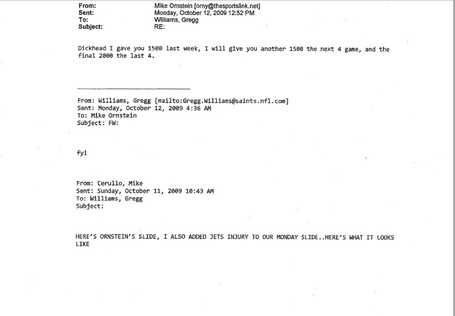 This second image is a capture of an email conversation going back and forth between players and Gregg Williams. In it mention is made of making sure that the Jets injury was included on the next Power Point presentation. Why include that unless you're encouraging players to go out and injure? 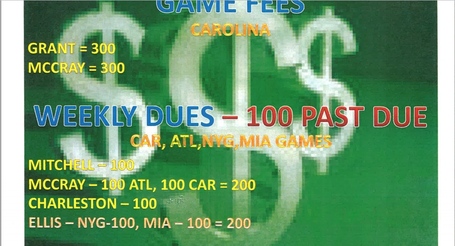 Here we have a slide showing the amount that various players owe to the program. This proves that the pay-for-performance/bounties wasn't just a coach thing, but that the players were actively involved as well. 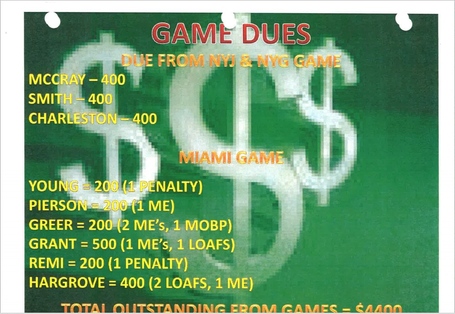 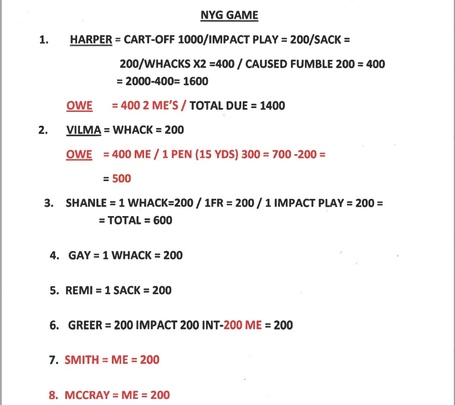 Ledger showing payments for cart-offs, hard hits, and other metrics, as well as fines for mental errors. (In this game Brandon Jacobs was forced out of the game due to a shoulder injury after Harper hit him) 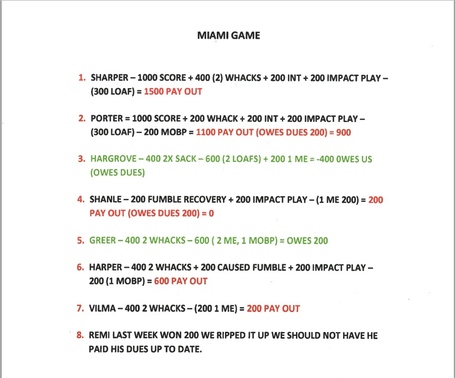 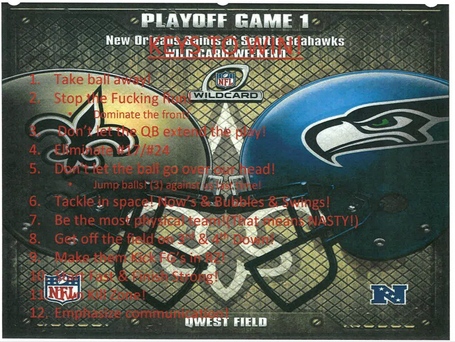 Slide with various points, including the line "Eliminate #17 and #24" 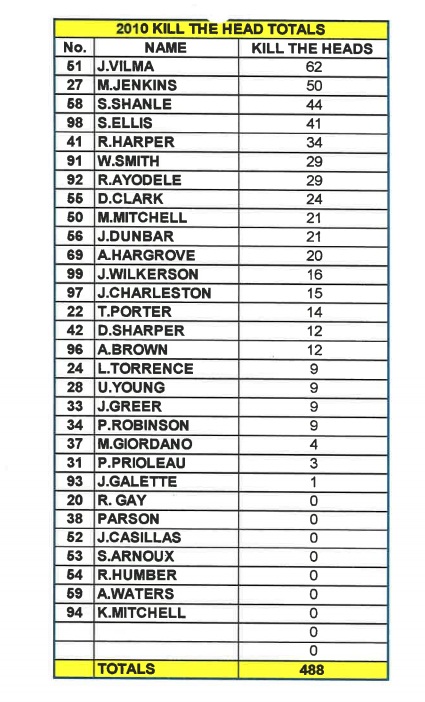 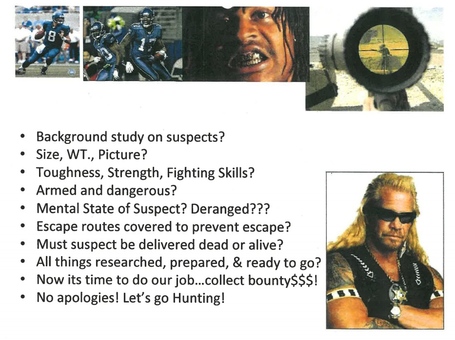 Dog the Bounty Hunter reference with the line "Let's collect our bounties!" By itself nothing out of the ordinary, but when taken in context with the rest of the material it's damning. 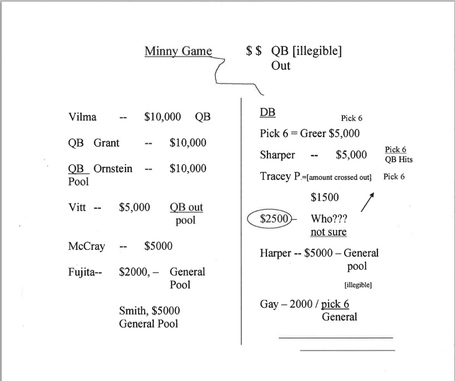 Ledger showing donations by players to the "QB Out" pool. Total amount pledged is $35,000, with Vilma donating $10,000. Hard to argue that you're being smeared, when there's a ledger in your coach's handwriting showing that you pledged $10,000 to knock a QB out of the game.

According to James Varney of the Times-Picayune, the league showed additional video evidence to reporters with more than one reference to collecting bounties.

As to the NFC championship game, the league offered a detailed video presentation that shows former Saints defensive lineman Anthony Hargrove saying, "Hey, Bobby, give me the money!" to former teammate Bobby McCray after Vitt, in a sideline huddle with the unit, tells the Saints he thinks Favre has a broken leg and will be replaced.

Hargrove was fined $5,000 and flagged for a hit on Favre in that game; video of the hit was also part of the NFL's presentation.

Apparently Hargrove got a large suspension because he lied about the issue to investigators.

Hargrove drew an eight-game suspension from Goodell, in large part because the league accused him of lying about the situation. An unidentified witness -- the league insisted it must protect the anonymity of some of its sources -- told investigators he saw Vitt tell Hargrove to lie, and Hargrove responded, "I can lie with the best of them," according to the presentation.

When pressed about that matter, White said Williams acknowledged telling both Vitt and Hargrove to lie and that Vitt denied ever coaxing the player to lie.

The ledger showing $10,000 from Vilma is apparently backed up by witness statements.

In 2010 Childress came to the league and said that a Saints player told a Vikings player that there were bounties placed on Kurt Warner in addition to Brett Favre. The Vikings player later recanted, and since this was secondhand information at best it's not enough to warrant discipline on it's own--but it does add to the existing body of evidence.

There were apparently bounties placed on Cam Newton and Aaron Rodgers as well, though again this is based on hearsay, so it wasn't used as part of any evidence to discipline the players.

There are several different things going on here, all labeled under the "Bounty gate" tag (and I wish the NFL had separated them to avoid confusion).

Pay for Performance--There's absolutely no doubt that both players and coaches were involved in a pay for performance program that included things like sacks, forced fumbles, hard hits, etc. While against the CBA, this is not enough to warrant an indefinite suspension for Williams, and the lengthy suspensions handed down to Fujita and Vilma.

I think the evidence is strong enough to convict Williams, Vilma, and Hargrove in a civil court (where there is no requirement for undeniable proof), but only Williams in a criminal court, and it seems to me that the NFLPA is asking that the NFL judge this based on a standard requiring undeniable proof. If so they probably should have asked for that in the collective bargaining agreement, and they didn't.

Response by NFLPA and players

The response from the players and the NFLPA has been about what you'd expect based on their previous statements. There's quite a bit to cover in that as well, so I'll save that for another post so I can cover those as much as possible