San Francisco 49ers: Breaking Down the Best Defensive Three-and-Out in 2011

Share All sharing options for: San Francisco 49ers: Breaking Down the Best Defensive Three-and-Out in 2011

After reviewing the San Francisco 49ers 2011 season in it's entirety, and looking at it from a broad perspective, there were many points where I wished there was time to further break down the Niners more deserved efforts.

The 49ers best three-and-out came in the 4th quarter of the NFC Divisional Playoffs, where San Francisco hosted New Orleans at Candlestick. It was 20-17, San Francisco on top, with a little more than 11 minutes remaining in the game.

The 49ers failed to convert a 3rd and 3, where an Alex Smith pass was nearly intercepted by Patrick Robinson after going in and out of the hands of receiver Kyle Williams. Andy Lee came out and punted a 61-yarder to back New Orleans up in their own territory.

Follow me after the jump for a photo-by-photo breakdown and analysis of what ensued.

The 49ers came out of their 3-4 base defense to counter the strong formation the Saints were showing with 2 wide receivers, 2 backs and an extra offensive lineman. That's right, the Saints had 6 offensive lineman in protection -- 2 per down lineman. The 49ers rushed four, with a twist coming from Justin Smith and Parys Haralson on the right side.

Smith caused the initial disruption for Jermon Bushrod and Carl Nicks, with Haralson close behind him. Once Haralson made contact with Nicks, Smith got through the crease after being too much for Bushrod to handle. Smith flung his arm up, got through and flushed Drew Brees out of the pocket to his left.

Considering Brees is a right-handed passer, it put him in an awkward position where he had no receivers and couldn't deliver an accurate pass throwing across his body. Justin Smith finished the play by chasing him down and wrapping him up as Brees threw the ball away. 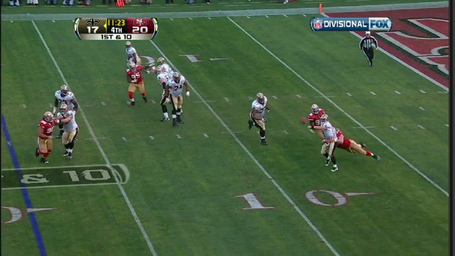 The incomplete pass brought up a second and long, in which case the Saints felt comfortable with an aggressive pass play. The dialed up a shotgun pass -- one of many on the day -- where Brees was lined up with 5 receivers that included tight end Jimmy Graham and running back Darren Sproles split out wide.

Looking at an empty backfield, the 49ers boldly sent out their base defense again, except this time Aldon Smith checked in for Parys Haralson. Justin Smith was upright, lined up in the two-point stance,with Aldon Smith, Ricky Jean-Francois and Ahmad Brooks as the three down linemen. On 2nd and 10 from their own 18, Brees took the snap and all the receivers cleared out except for Graham.

Upon the snap, Aldon Smith dropped back into coverage with Carlos Rogers rushing from the opposite side instead. Brooks, Jean-Francois and Justin Smith all came, driving the entire Saints front backwards immediately. Justin Smith occupied Bushrod, while Ricky Jean-Francois occupied three offensive lineman (LG, C, RG), leaving Brooks one-on-one with the right tackle, and Graham busy with Rogers.

With 7 guys in coverage responsible for their 4 receivers, Brees held on to the ball too long -- Brooks shed his blocker inside and blew up Brees in the pocket. 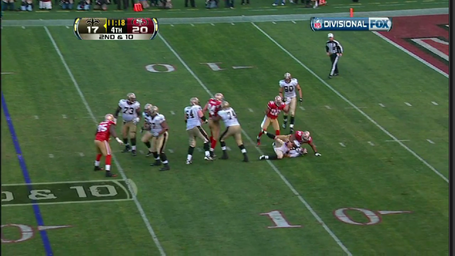 The Brooks sack on second down went for a loss of 7, putting the Saints in a third and very long, deep in their own territory. The Saints went with an empty backfield again, with Brees lined up in the shotgun. The 49ers came out in the quarter defense, with three down lineman, two linebackers and six defensive backs. Justin Smith, Ray McDonald and Aldon Smith rushed, with 8 men dropping in coverage.

Aldon Smith and Ray McDonald stunted sloppily on the left side, attracting the attention of four Saints o-lineman, from the left guard to the right tackle. Justin Smith was left with one-on-one with Jermon Bushrod; Smith got leverage off the snap and drove Bushrod backward.

Smith took Bushrod all the way to an unsuspecting Brees who was winding up to throw. Smith, without time and still engaged with the tackle, reached over the shoulder of Bushrod and grabbed the collar of Brees' jersey. As soon as Smith had a firm grip, he dropped his center of gravity, taking Brees and Bushrod to the ground with him. As all three men were on their way down, Brees was somehow able to get rid of the ball for an incomplete pass. 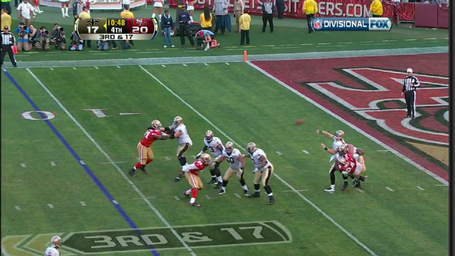 This three-and-out perfectly sums up a spectacular day, defensively, for the San Francisco 49ers. The Niners were flying around the football and making plays all day, and this series was a particular great showing by the defense. It also highlights the collective efforts of players, like the importance of Ricky Jean-Francois hogging offensive linemen or the mere presence of Aldon Smith.

And most of all, it is a great example of everything Justin Smith is as a player. He did not have a single statistic on this series except QB hurries, which are not a popularized stat to say the least. But Smith was a major factor on every single one of these downs, which completely neutralized one of the most potent and feared offensive attacks this league has ever seen.

This is a great reminder of what this defense is capable of; namely dominance.