After last seasons's difficult ending, many people (including myself) figured that was the end of Kyle Williams' role as a punt returner. Apparently we were wrong. During OTAs, while Ted Ginn Jr. dealt with his injury recovery, Kyle Williams was the number one punt returner. During training camp, Williams has continue to get work as Ginn's primary backup. This resulted in him getting three chances to field punts last night against the Vikings.

While a few punt returns in the preseason don't meant a ton, I do think it's worth reviewing his work in that role given how last season ended. Ginn was on the field last night, but did not return any punts, so we got several opportunities to break down Williams' work. We'll do this each week of the preseason because I think there is something to learn with these returns.

After the jump I've got a breakdown of each punt with a pertinent picture for the first and third punts.

On 4th and 7, Chris Kluwe kicked a 49 yard punt that Williams caught cleanly and with a lot of space at the 49ers 38-yard line. In the picture below, the ball is just entering his hands o the far left of the screen. Plenty of room to maneuver.

Upon catching the ball, Williams broke forward and Colin Jones (#43 in the middle of your screen) sets a solid block on Eric Frampton (#37 and "closest" to the ball in the shot above). It wasn't a bone-crushing block, but it slowed Frampton enough that Williams could get past him and then split the next three defenders.

Williams would end up with a very solid 22-yard return on the play, but it wasn't with one decision that likely had many fans giving the bitter beer face. Here are three shots to give you an idea of what happened. 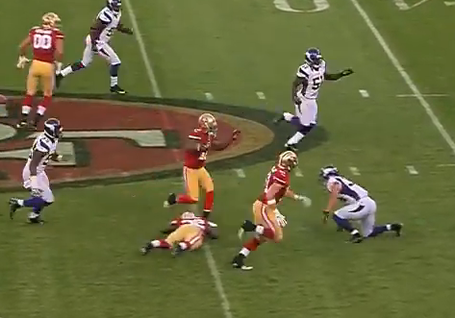 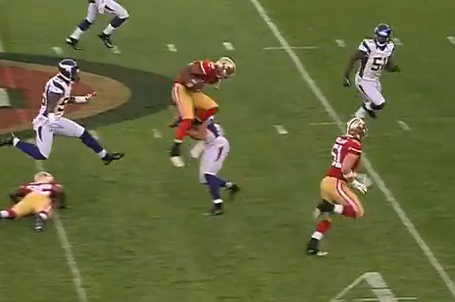 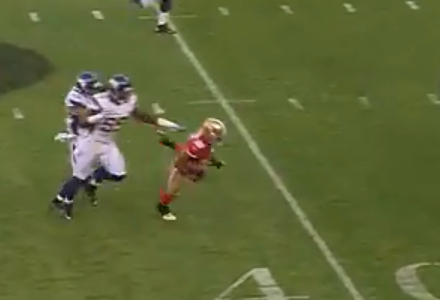 In the first picture, Williams is just about ready to try and leap the defender that is on the ground. However, the defender was already starting to get up as Williams began his leap and as picture two shows, the defender got up while Williams was at the height of his leap. Williams came down in picture three and landed front first on the ball. Fortunately he didn't lose the ball, but as that happened I remember cringing just a little bit.

Let's be honest, if Ginn makes that decision, I might cringe for a second, but I quickly forget about it if he doesn't lose ball. Over the last two seasons with the 49ers, Ginn has been among the top kick and punt returners in the league. This has bought him some good will when it comes to any crazy decisions.

Whether it's fair or not, fans will cringe on plays like this with Williams, but it won't necessarily leave their head right away, as it would with Ginn. I don't know that this was necessarily a bad decision on Williams' part since the defender was on the ground when he started to leap, but that doesn't change how it "makes me feel." As touchy-feely as that might sound, I think it's pertinent in regards to Kyle Williams.

On 4th and 4, Chris Kluwe kicked a 41-yard punt that Williams caught cleanly and with a lot of space at the 49ers 26-yard line. Williams caught it cleanly and gained six yards on a return that included him cutting to his left before being brought down from behind. Not a lot to see here.

On 4th and 17, Chris Kluwe kicked a 43 yard punt to the 49ers 26-yard line. Kyle Williams gave the fair catch signal on this play and caught it with 59 seconds left. What I found interesting was the fact that it was a very returnable punt.

One of the issues during the NFC Championship Game was that Williams probably should have simply been fair catching a lot of these balls given the conditions of the game. In this example from yesterday, there was under 59 seconds left and the 49ers were in good shape heading into halftime. Maybe that's more of the understanding the context of the situation? It's just a guess on my part.

For now, he didn't cough the ball up, but that leap caught me off guard. Hopefully that is not a sign of too much risk-taking at this point. Over the course of the next three games, hopefully we'll get a better idea of where he's at. Of course, then we'll need to see what he does when it matters mosts. Until then......