San Francisco 49ers running back Brandon Jacobs recently spoke to Clark Judge of CBS Sports. The topic of discussion was a popular one this offseason: the New York Jets. Jacobs, formerly of the tri-state area, has not been pleased about hearing of his former cross-town rivals, over and over and over again.

And who can blame him?

The New York Jets have become synonymous with ESPN this offseason. With the arrival of Tim Tebow, loudmouth head coach Rex Ryan and GQ model/part-time QB Mark Sanchez, it's been all-Jets all the time on the nation's No.1 sports channel.

For Jacob's comments on the New York Jets, and the connection to the East Coast bias, continue after the jump.

Jacobs referred to it as a "circus":

I shouldn't be speaking of their team, but I'm just so tired of reading and hearing of everything over there ... and it's mid-August. It's like: Are you kidding me? Camp's not even over.

Jacobs isn't wrong in pointing this out. A lot of football fans seem irked that while their teams may be more deserving of headlines, it's a lower-echelon team like the Jets that are receiving consistent media coverage. It's downright irritating the way ESPN has, for lack of a better phrase, beat a dead horse.

They were in the AFC Championship Game twice in a row, but the year after that the Giants win the Super Bowl. That discredits everything as far as the Battle of the City. They can't ever one-up the Giants -- not in my eyesight; not in anyone else's eyesight. They can never do that. They keep trying, but they're doing it the wrong way.

While Jacobs does not seem to hold anything against the Jets personally, he is rather sick of the attention they receive on a regular basis. This quickly brings us to the topic of the East Coast biased, which is very real and in effect.

ESPN had a week-long special at Jets camp in Florham Park, NJ. They are also regularly on NFL Live's agenda, which airs weekly at 1pm PT on ESPN. And there seems to be no shortage of story lines, however irrelevant, childish or uninteresting they are. The fights at Jets camp, the "mystery" of the wildcat package, Antonio Cromartie calling himself the team's second best receiver, the shirtless Tebow in the rain -- and it goes on and on. 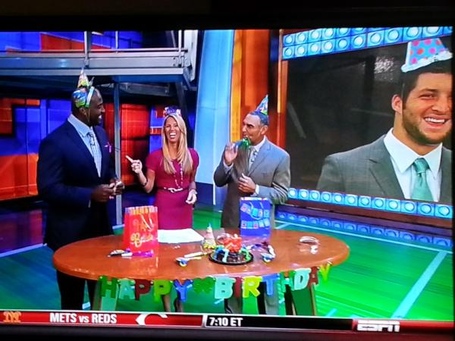 This is a photo of NFL Live this past Tuesday, August 14th: Tim Tebow's birthday. Complete with all three hosts, a cake, hats and streamers, the NFL Live crew left viewers (at least myself) speechless. I was at a loss; hardly angry, but more just dumbfounded than anything.

Simply put, this has to stop. It just has to. Its ruining the sport. It's making fans hate the New York Jets; fans who would otherwise really have no quarrel with them. You cannot compromise the integrity of the sport by destroying it's components just because it gets ratings.

Because ratings aside, the people have spoken, and they don't want 24/7 coverage of the Jets anymore.