In the San Francisco 49ers' second exhibition game, they traveled to Houston to take on the Texans. In that match, fans and analysts alike received another minor glimpse of the 49ers new-look offense featuring Randy Moss and Mario Manningham.

After not suiting up in Week 1 versus the Minnesota Vikings, Manningham saw time against Houston -- however, he finished without a catch.

Randy Moss on the other hand had his first grab in a 49ers uniform, but missed on a couple potential touchdowns. One of the potential touchdowns was a drop by the receiver down the left sideline. Backup quarterback Colin Kaepernick put one up high and it simply bounced of Moss' hands.

The other missed TD is the one we will breakdown in this piece. This missed connection is more important because it involves the starting quarterback, Alex Smith. Moss and Smith will be teaming up in 2012 with the hopes to strengthen this once weak passing offense.

Smith is not used to having a deep threat of Moss' caliber. The 49ers starting quarterback has found success by playing risk-free, chain-moving football. For this relationship to blossom, both players are going to have to do things outside their playing characteristics.

In this piece, we'll break down a missed touchdown between Moss and Smith against Houston, while also discussing what they can do to avoid future missed opportunities. 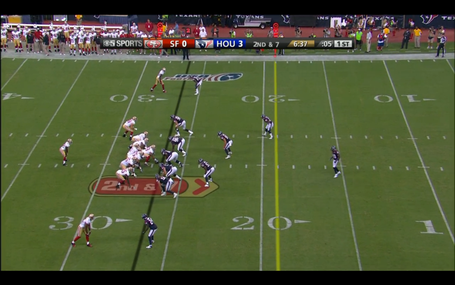 At the top of the photo, you'll see Randy Moss lined up at the split-end position with Michael Crabtree at flanker. Vernon Davis and Konrad Reuland are in at tight end with Kendall Hunter as the lone tailback.

The Texans matched the 49ers offense with their 3-4 base defense, daring San Francisco to throw deep with their safeties playing so close. The Texans left Moss 1-on-1 with their No. 1 cornerback Johnathan Joseph. 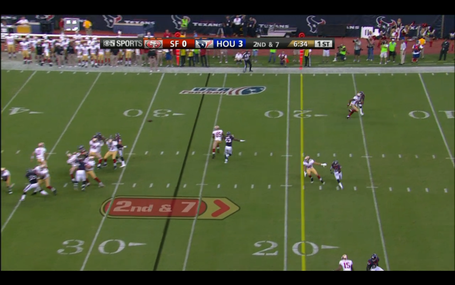 Davis had 1-on-1 coverage with the linebacker, and Alex Smith knew it was just a matter of seconds before Davis got ahead of the coverage. It is for that reason that Smith predetermined his target on this play instead of going through his progressions. Had Smith looked at Moss once during this play, he would've seen his 6'4" wide open. The truth is, Moss was open from the beginning of this play to the end. 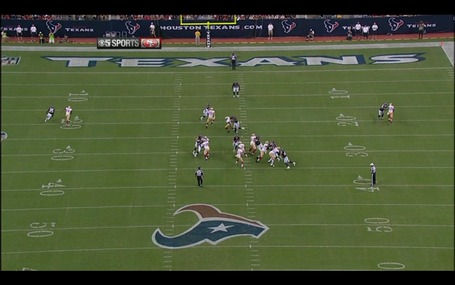 From this view, we can see what was in front of Alex Smith.

Michael Crabtree was covered unless Smith felt he could make a throw to his receiver's outside shoulder where only he could make the catch. Konrad Reuland is deep in the middle of the field running toward some open space and could have been thrown open. However, if you look at Smith's legs, it's clear that he's already committed to the left side of the field.

That really only leaves Vernon Davis on the cross, since Moss is running a skinny post.

Smith knows Davis is coming on the cross and over-comitted to that one pattern without assessing all of his options first. The quarterback could have even waited and put one over Moss' shoulder in the end zone because he had protection on this play.

The one excuse one could make for Smith is that he didn't trust the safety playing centerfield. But the image displays the safety pretty out of reach, and he should have known there was no way he could make it to Moss in time. The safety has his feet planted and is closer to Crabtree and Reuland than he is Moss.

Moss beat the coverage, but Smith just missed him. Moss has his corner trailing before Davis was even open. So for that period of time, we can see that Smith had a pretty substantial window to deliver the football to Moss.

I've discussed this once before: It's not that Smith can't make the throws, it's that he appears more comfortable with his underneath routes instead of letting things develop and taking risks. He missed a would-be touchdown instead of pulling the trigger because he did not want to make a mistake.

Alex Smith needs to unwind a little bit and take more risks in 2012. He cannot be as conservative as he has been in the past. Fortunately for him, Smith has the offensive weapons and defense to allow him to take chances. Randy Moss' only mistake was that he didn't throw his hand up.