Breaking Down the 49er Running Game Part 2 : Base Defense

Share All sharing options for: Breaking Down the 49er Running Game Part 2 : Base Defense

We're back for Part 2 in this series on the 49er running game. If you missed it, make sure to go back and catch Part 1 here as we'll be building on most of the concepts we covered last time. We briefly covered the defensive concepts of gap accountability and pursuit as counters to formational strengths and gap movement. Now we are going to explore the defense in a bit more depth by changing the point of view to the defensive coordinator and talk about the abstract run defense. We're going to lead off with some basic counting games followed by the two prevailing big picture philosophies of how to defend the run and then dig into the nuts and bolts of how defensive coordinators implement their base fronts.

Follow me below the jump and we'll dirty the chalk-board.

As I mentioned last time there are three ways to win in football: numbers, angles, and athletes. The first thing we have to do as fledgling defensive coordinators is do some counting. As we learned last time, the amount of gaps provided by the offensive line and extra running backs is given by the sum of those players plus one. This presents a problem for us when we try to match up numbers. What we would like to do is match up our front seven on the seven blockers, call it a scheme draw, and trust our odds that we can break at least one block on every play.

The problem that comes up when we try to do this is how gaps are created. If you remember from Part 1, the number of created gaps is equal to N+1 where N is the sum of blockers on the play. So we have a seven man front and eight gaps to control and that's not a good place to be. Ideally we want an N+1 situation too so that we can introduce an 8th man into the play that can attack the ball. The 8th man is the guy that scheme sets up to make the tackle and the guy that the offense is always trying to identify pre-snap.

So on offense, everything they do is designed to move or create gaps in a way that makes the play difficult to defend.

On defense, everything we do is designed to cover those eight gaps, wherever they may be, with only seven defenders, leaving an eighth defender to make the stop.

So how do we cover eight gaps with seven defenders? This is a fairly old question with a common sense answer. No matter what defense we decide to implement one defender must be responsible for two gaps. Regardless of what front we decide to implement, as long as it contains only seven defenders there is no way around having one player with two gap responsibility unless we invite the strong safety to the party and run an eight man front. In the vanilla 3-4 and 4-3 that responsibility is taken by the nose tackle and middle linebacker of the respective defenses with both players responsible for the gaps between the center and the guards on each side of him.

So there is the outer edges of the puzzle, the numbers. Next let's talk a little bit about angles. Every defensive coordinator has a plan to force opposing rushers into a wall of tacklers but every one seems to do it a little differently. But if you spend enough time looking at all the different implementations you'll find that they all fall to some extent into one of two categories : "Force and Contain" and "Fill and Spill". These are the two big picture philosophies to denying the running game.

This approach is perhaps the older of the two and is based on preventing opposing running backs from reaching the perimeter where they can get large gains down the sideline. Force and contain aims to force all runs back into the box defined by the width of the defensive ends where the middle or inside linebackers can plug the point of attack. The main focus here is to keep the running back pounding into your line. 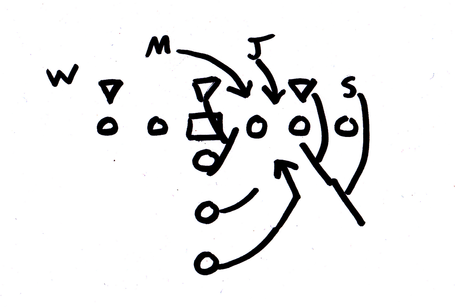 This philosophy is a bit more modern and was born with the increase of team speed. A team using a fill and spill philosophy wants to fill all the inside running lanes and spill (bounce) every run to the outside where it will be run into a tackle from a "force player" or the sideline. The main focus here is to keep the running back running from sideline to sideline and never allowing him to get upfield with shoulder square. 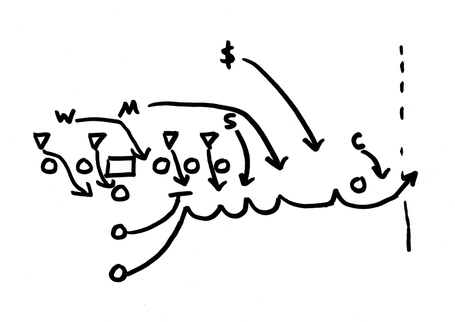 In general, teams who lean more toward force and contain build teams with more size and teams who approach run defense with the fill and spill concept build rosters with a focus on team speed. 3-4 defenses tend to favor force and contain while 4-3 teams tend to favor fill and spill. But keep in mind that this is only a tendency, and very few teams if any utilize only one concept instead of some mixture of the two across their various fronts.

One thing you'll find in common is that both concepts seek to keep any gain on 1st and 10 to 3 yards or less and prevent any big plays. One statement that you will hear almost every DC make is that "big runs can always be traced back to the defense being split, lost force, improper pursuit, or missed tackles." While all may be linked to personnel issues, the defense being split and improper pursuit are the two that will also pop up when your specific scheme is being attacked. If you've been paying attention, you've noticed "a split defense" is what you would call a failure of gap accountability.

If you are trying to identify concepts, watch how the defenders of any defense attack the perimeter run. Spill and fill teams attack the inside shoulder of the back or lead blocker and contain teams attack the outside shoulder to force the ball carrier back inside. Look for consistent helmet placement outside or inside and you'll have a good idea of the dominant theme of a defense.

Now let's pull back from the abstract and look at how it effects the nuts and bolts. 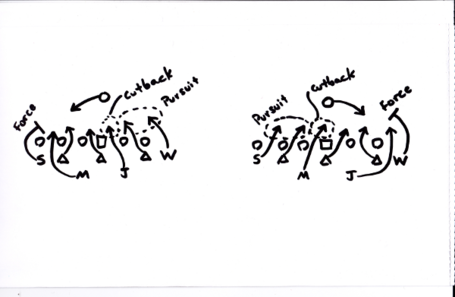 As you look at these 3-4 fits keep in mind that all the play-side defenders will be attacking the lead shoulder of the running back forcing him back inside. All back-side defenders will be in controlled pursuit funnelling the running back into the teeth of the Mike or Jack and the 5T playing in front of him. If you have great 5T defensive ends (playing a 4 technique head up on the tackle here) that can push the tackle around not many teams will have success running against you. 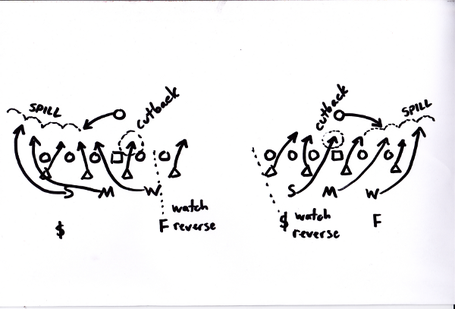 Compare the 4-3 built on speed with the 3-4. Notice how much range is expected from the three linebackers. Each one of these guys has to be able to beat the running back to the corner and keep him moving east and west. When you watch one of these teams you will see defenders attacking the inside shoulder of the running back and playing inside out instead of forcing. Also notice how one safety (or corner, not pictured here) is usually always involved in the run support scheme. Stretching a run out to the sideline involves much more movement and usually always leaves a back-side gap vulnerable somewhere and you can take advantage of undisciplined players in the secondary when you scout it.

But remember these are only generic base run fits. Different schemes may alter these within the same front (alignment) based on personnel or game-plan and they will be a bit different when changing the front. Also remember that these are very basic fronts and most defenses have several fronts in their arsenal which will each come with their own run fit. But these are good common examples of the fits you will find in the NFL. Next time we'll look at how we attack these base run fits with the inside zone.