Share All sharing options for: Putting to Bed the Rumors that Alex Smith-Randy Moss Connection Can't Work in San Francisco

In the 2012 offseason, the 49ers made significant moves to address their 29th ranked passing offense. San Francisco took advantage of free agency and the draft to correct some of their issues on the offensive side of the ball. The team added wide receiver Mario Manningham and running back Brandon Jacobs from the Giants, while adding A.J. Jenkins and LaMichael James in the NFL Draft.

However, one of their more notable signings and the player who continues to be a monitored story line from Santa Clara is wide receiver Randy Moss. While the majority close to home are optimistic about the signing, Moss has a lot more doubters than he does believers. Unfortunate as it is given what he's done in this league, it will only fuel the future Hall of Fame receiver.

I feel the need to eradicate some of the false or misguided beliefs surrounding the 49ers' starting quarterback and new addition Randy Moss. In the following piece, we'll address a few general arguments presented by non-believers regarding Smith and Moss in 2012.

The wheel-route in particular is an inherently deep route that Smith has a firm handle on. The player he usually connects with on this pattern is tight end Vernon Davis. Davis is 6'3, and runs a 4.38 forty-yard dash, bringing similar size and speed as Moss. The connection that Smith and Davis have is versatile and perhaps the best link-up on offense.

Randy Moss is 6'4 with similar speed, but more range as a pass-catcher. When it comes to targeting Moss, Alex Smith will only have to throw to an area.

With Vernon Davis and Michael Crabtree in particular, we've seen Smith throw precision passes deep down the sideline. The 49ers passer can be accurate throwing deep outside the numbers, and with a receiver like Moss, it should come easier.

To cite a few examples in 2011 of Smith displaying arm strength and accuracy:

49ers v Rams: Smith to Crabtree (50-yards of hang-time before Crabtree made the reception in stride at the STL-10 and ran the rest of the way in for a TD)

49ers v Rams: Smith incomplete to Davis (Davis had a memorable drop on a would-be TD, where Smith let it rip from mid-field deep into the end zone, and a perfectly placed ball bounced of Davis' hands)

49ers v Buccaneers: Smith to Walker (Smith released from the TB 35-yard line, complete in the end zone for a TD in triple coverage)

49ers @ Seahawks: Smith to Crabtree (Smith released from his own 23-yard line, complete down the left sideline inside the SEA 30-yard line, almost 50 yards of hang-time)

49ers @ Ravens: Smith to Ginn Jr. (From the SF 17-yard line, Smith released and complete to Ginn Jr. inside the BAL 35-yard line, Ginn ran the rest of the way for a TD but it was called back)

The 49ers did not run a lot of deep routes since their personnel did not feature anyone who could stretch the field. In 2011, San Francisco displayed a more traditional West Coast system with a lot of short-to-intermediate routes, where Smith could also depend on his outlet receiver.

San Francisco now has the personnel in place to challenge defenses deep and take the extra man out of the box. Smith can make these throws; because the 49ers did not go deep does not mean Smith can't physically make the throws. There is visual evidence of him launching the ball 50 yards downfield and hitting his target square in the hands.

In 2011, they took their shots throwing fades to Braylon Edwards. The majority of Smith's passes were precise and all of them were catchable. The problem was with Edwards, who either wasn't looking for the ball or had his body turned awkwardly.

This was a dimension the 49ers wanted to have in their offense but couldn't get from Edwards.

Looking over the footage, Smith threw passes that Moss more than likely would have caught.

With the 49ers working on situational football this offseason, Smith should improve his timing and ball location in specific red zone plays. With Moss' height and leaping ability, offensive coordinator Greg Roman and quarterbacks coach Geep Chryst will have Smith throwing those balls high and away.

There seems to be an understanding out there that Moss only runs the 9-route and Smith can't throw the 9-route -- both false.

Moss has speed, yes, and it bodes well for him when he runs the 9-route. However, his speed is also valuable when he has possession of the ball, and Smith's game is about getting the ball in his playmaker's hands.

Moss has the athleticism and speed to take a slant and make guys miss for big yardage. To make the go-route more effective for the 49ers, they need to have Moss run other plays and patterns to set it up. Before San Francisco winds up to take their shot downfield, they will methodically position themselves in order to raise the likelihood of the play's completion.

With Moss' quickness off the line and sideline-to-sideline speed, crossing routes of all depths are options for the new 49ers wide receiver. Smith is comfortable and accurate delivering in the middle of the field, finding his guys in soft spots in the defense.

The 49ers will put Moss in position to catch 20-yarders but tack on 60 more in yards after catch. He will be running curls, fades, slants, deep ins and outs and everything of the sort. While his claim to fame in the 9-route, and it will be utilized, it won't be abused, expected or repetitive.

This is sort of linked to the first point in this article.

A lot of NFL fans outside of Niners Nation have come to understand that Alex Smith is an incompetent QB and it's only a matter of time before Moss gives up. It's a pretty close-minded argument, but it is not an uncommon one to find - many believe this to be true.

Second, Moss is fully aware of the team he chose and who quarterbacks it. He had an opportunity to join Drew Brees and the Saints and he favored Alex Smith and the 49ers. The reason is Moss is a smart and experienced player who realizes there is a complete team in place and that Smith can do enough to get San Francisco where they're trying to go.

During this epiphany, Moss probably also realized that this defense is awfully good and with 11 starters returning, he might get a lot of opportunities on offense. The defense's ability to get off the field on third down and take the football away will provide the Niners offense with plenty of chances to score points - this time hopefully cashing in field goals for touchdowns.

Moss found losing situations with teams like Oakland, Tennessee and his second stint with Minnesota. The 49ers win with Alex Smith and that's all Moss cares about. Including the postseason, Alex Smith led San Francisco to 14 wins and an NFC Championship appearance in 2011.

In a game where the Niners 26th ranked offense was asked to score points, Smith outplayed record-setting QB Drew Brees.

And finally, Moss will stay humble because he knows this team will go on winning without him, so he better stay with the program. He has a shot to define his legacy with the 49ers and leave the game the way he wants to. If Moss reverts to his old ways, he will never forgive himself. The opportunity in front of him could yield him his first ever Super Bowl Championship if he decides to play this game the right way -- the dominant way he knows how to play. 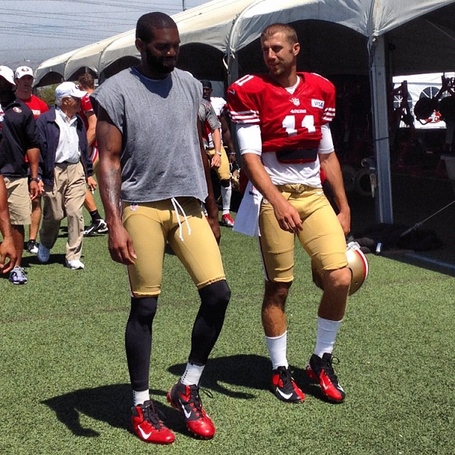