The Booth Review - 49ers vs. Packers: "How Alex got his swagger back"

Share All sharing options for: The Booth Review - 49ers vs. Packers: "How Alex got his swagger back"

I winced, and then raised a brow.

"Did he really just do that?" I asked myself.

It was 3rd down and 5, in the second quarter of the game, when Alex Smith targeted tight end Vernon Davis. Smith’s pass fell short, but moments later, a yellow flag was on the field. Green Bay’s Charles Woodson was penalized for defensive holding. Instead of having to punt the ball away, San Francisco received a fresh set of downs.

Then Smith, usually stern and serious, emphatically threw his arm forward, pointing downfield, mimicking a referee’s first down signal. He let out a jovial "WOOOO!" before revealing a ‘senior picture’ smile. It was as if Smith rediscovered that he could still have fun while playing football. It was fiery, and it was feisty.

Against the grain of history, the San Francisco 49ers left Lambeau Field with a victory in their season opener by a score of 30-22. Before Sunday, the Green Bay Packers had won 19 of their last 20 games at Lambeau while preserving a 9-game winning streak against the 49ers in the regular season. The last time the 49ers won at Green Bay? November 4th, 1990.

How did they get it done?

"Well, I think just playing good team football for sixty minutes," said Smith, in the postgame press conference. "Everybody helping each other and executing. For me, it’s making good decisions with the football, being smart with the football. It all starts with that, and we did a good job with that today."

Smith was productive and efficient as he threw for 211 yards, 2 touchdowns, and no interceptions. The 49ers offense reloaded in the offseason by adding a plethora of new weapons, but everyone - old and new - played their part.

"We ran the ball, we passed when we needed to, and we made the plays. We made it happen," said Vernon Davis, in the locker room after the game. "We were really in sync: Randy [Moss], Mario [Manningham], Kyle Williams, Delanie Walker; we got a lot of power. But we have to keep our focus and just keep our eyes on the prize."

Davis, who grabbed a touchdown pass in the third quarter, is already looking ahead to next week.

"I’m excited about going into the office and getting ready for the next one."

San Francisco’s smothering defense forced Aaron Rodgers and the Packers to eat their cake in small bites. The 49ers pass defense surrendered only three passes of 20+ yards – two in the second quarter and one in the fourth quarter. The Packers became a one-dimensional team as their running game never materialized; the stingy San Francisco front allowed just 45 total rushing yards all day.

Cornerback Carlos Rogers claims that Sunday’s defensive success started on the practice field during the week.

"[Our] coaches put us in the right position to make plays…put us in a rhythm of their no-huddle offense, and once we came out here, it was about just executing the game plan, and that’s what we did. We did a great job of that." 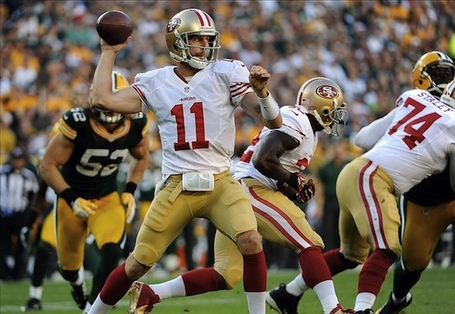 Coach Harbaugh has a well-documented history of lavishly praising his players to, perhaps, indirectly instill confidence in them. So when he claimed last month that Smith had a mental mastery of the offensive system, I couldn’t help but be slightly skeptical. So far though, it appears that I owe Coach an apology.

Smith was razor sharp against the Packers and looked noticeably more comfortable in the offense than he did at any point last season. He was calm, poised, and decisive. Last year, Smith had a tendency to hold onto the ball way too long which led to many unnecessary sacks. This was not the case on Sunday. Like a savvy veteran, Smith got rid of the ball quickly and accurately, and when he didn’t have an open receiver, he wisely threw the ball away.

For instance, let’s take a look at the 49ers’ last drive of the second half.

After Colin Kaepernick ran the ball to the 45-yard line for the first down, there were 11 seconds on the clock before the half ended. The 49ers were obviously trying to position themselves for a field goal. On the first attempt, Smith, out of a shotgun formation, received the ball, looked right, and fired a pass over the head of Michael Crabtree. On the second attempt, out of the same formation, Smith, again, looked right and fired a pass out of Crabtree’s reach. Smith failed to shorten the field for Akers’ field goal try.

You could easily interpret those incomplete passes as a result of Smith’s inaccuracy, but I genuinely believe that Smith, on both attempts, felt Crabtree wouldn’t be able to get out of bounds to stop the clock. I think Smith deliberately threw those passes out of bounds to preserve the opportunity for a field goal try, which Akers would miraculously hit from 63 yards away. 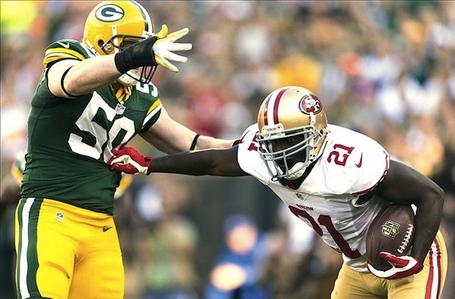 I passed on Gore in my fantasy football draft last month – five times – and I’m starting to seriously regret it. I mistakenly believed that Gore, playing his eighth season in a crowded stable of running backs, would see a drastic drop in production and carries. This may prove to be true once Brandon Jacobs returns from injury and LaMichael James becomes more acclimated in the offense, but in Week 1, I couldn’t be more wrong.

At 29, Gore is an old hound in running back years, so to see him gash and slice through the Packers’ front-seven was a sight to behold. Gore, who averaged 7 yards per carry on Sunday, proved that he still has incredible patience and vision. He can grind for the gritty between-the-tackles yardage as well as any other runner in the league.

I’m going to keep calling him David "Golden Leg" Akers until it sticks.

Akers began his 2012 campaign with the same prolific accuracy that earned him All-Pro honors in 2011. He didn’t simply hit his first two field goal tries – at 40 yards, and 43 yards – he drilled them right down the middle.

Akers also made history on Sunday. In perhaps the most dramatic moment of the first half, at 63 yards away, "Golden Leg" blasted the ball into the air. The football bounced off of the crossbar…<dramatic pause>…before falling through the uprights for the score. Akers joined the company of Tom Dempsey, Jason Elam, and Sebastian Janikowski as the shared record holders for the longest field goal in league history.

"After 14 years of active roster play, it’s just one of those things that you’ll never forget, that’s for sure. So I think it’s a nice ending on a Disney movie," said Akers, in a postgame interview.

Okay, perhaps I’m being unfair. It’s hard to find a glaring weakness in the 49ers’ performance on Sunday, but somebody has to sit on The Hot Seat, so I nominate Walker.

Walker was a crucial part of the offense last year. While that wasn’t always evident on the stat sheet, the mere fact that he was on the field meant he had to be accounted for. Like fellow tight end Davis, Walker has the kind of breakaway speed typical of wide receivers.

Against the Packers, Walker was thrown to three times and couldn’t haul in any of them. One of the dropped passes was on a crucial third down. Instead of converting the first down and sustaining the drive, the 49ers had to settle for a field goal.

The 49ers’ offense could be that much more lethal if Walker can prove to be as reliable in the passing game as he was in 2011. Let’s hope it was just a case of ‘new season nerves.’

Harbaugh was understandably upset about the questionable penalty calls from the replacement officials. Right before the commercial break, he was shown on the sideline, in slow-motion… 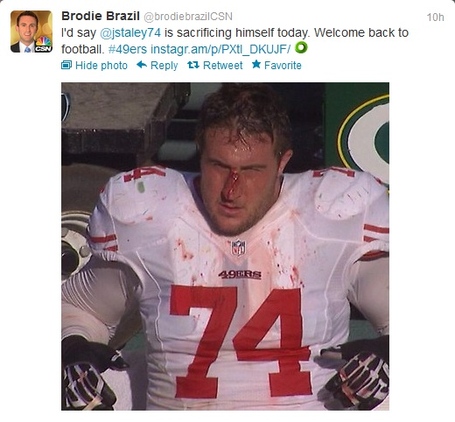 Joe Staley was literally blowing blood out of his nostrils and onto his jersey on Sunday, but he also provided the best visual representation of what Niners football is all about. Teams should know by now that if you’re playing the San Francisco 49ers, it’s going to be a long, ugly, hard-nosed battle in the trenches. Get well soon, Joe!

After snagging a touchdown reception in the third quarter, Vernon Davis channeled his inner Jimmy Graham by trying to drunk the ball over the crossbar. It didn’t work. We still love you, Vernon.

It cannot be understated how brilliant of a play call this was by Coach Harbaugh. As the second half was winding down, Kyle Williams returned a punt to San Francisco’s own 38-yard line. At this point, there was about 18 seconds left in the half. Instead of Smith walking out to the huddle, Coach Harbaugh sent backup quarterback Colin Kaepernick instead.

Kaepernick received the snap out of a shotgun formation (the ‘WildKaep?’), and on a designed run, he blazes 17 yards up field to Green Bay’s 45-yard line.

Harbaugh explains, "We put that play in for Kaep, the quarterback draw. Kyle [Williams] set it up with a punt return, Kaepernick makes the big run, and then David Akers finishes it off with a 63-yard field goal. A lot of good things had to happen, and they did."

Packers quarterback Aaron Rodgers is a huge fan of Boyz II Men. Apparently, Rodgers asked the R&B group to sing the national anthem at Lambeau Field before they played the 49ers on Sunday. This request would be obliged under one condition proposed by group member Nathan Morris: if San Francisco beat Green Bay, Rodgers would have to don a #11 Alex Smith jersey for the rest of the week. On the flipside, if Green Bay beat San Francisco, Morris, a lifelong 49ers fan, would have to do the same but with Rodgers’ #12 jersey.

Maybe Smith can autograph the jersey he wore on Sunday and mail it to Rodgers. Good thing Rodgers is a 49ers fan, right?

Next Sunday night, in front of a national audience, the San Francisco 49ers will host the Detroit Lions (1-0). Jim Schwartz’ Lions will travel to Candlestick Park for the hotly anticipated rematch from the 2011 regular season.

The Handshake: Part Deux, anyone?

"We’ll move on with humble hearts and get ready," said Harbaugh, concluding his postgame press conference. "We know we got a lot of great teams to play, but I’m really proud of our guys. We’ll come back and just do what we believe in, and that’s work and prepare."