San Francisco 49ers quarterback Alex Smith is coming off a breakthrough year in 2011. After a tumultuous beginning to his NFL career, Smith turned it all around in the span of a year. Since the inception of Jim Harbaugh, this whole franchise seemed to have been turned around, including the individuals that make up a large majority of it.

After finishing their first season together win a double-digit winning record and a conference championship appearance, Smith was looking to improve in order to help put this team over the top.

This offseason, Smith sought out pitching/throwing guru Tom House. House has an impressive résumé, having worked with quarterbacks like Carson Palmer and Drew Brees. House's teachings entail a mental and physical approach the game, and players have raved about his work.

Smith was hoping to polish and fine-tune his mechanics for the 2012 season. In this piece, we'll breakdown some of the differences in Smith from 2011 and 2012.

Since the 49ers have only played one game, I figured it would be appropriate to draw comparisons between Week 1 of 2011 and 2012 for some continuity. Looking through the footage from both match-ups, there were some noticeable differences in Alex Smith. 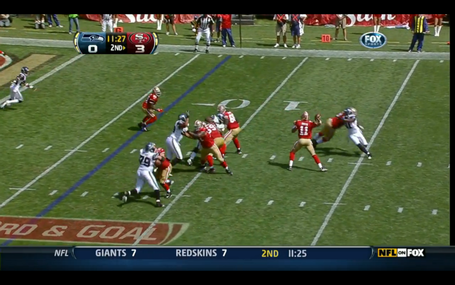 The first thing I noticed about Smith's throwing motion was irregular position the nose of the ball points toward when he winds up. The nose of the football is directed outward at an abstract angle, pointing away during his windup. Smith had this low-and-away windup where the ball would get as low as his midsection.

This prevented him from having a quick release because in Smith's windup, the ball had to travel too far before it was airborne. Smith also repeatedly threw off-balance and with his numbers directly facing his target.

Smith had little to no bend in his knees, often standing erect as he progressed through his reads. Throughout the course of the game, there was inconsistency in his leg placement. It seemed Smith's mechanics hadn't been defined, and he was just playing schoolyard ball. On certain downs you would see stiffness in his left leg and on others, it would be half bent.

When he stepped into a throw, he would lockup that left leg, as he would swing his right leg outward through the delivery. It was not a pretty overall motion -- it lacked that crisp, clean look that the top-10 quarterbacks in the NFL typically have.

He would keep his feet moving, bouncing and alert, but Smith appeared more fidgety than anything. There didn't seem to be a method to his madness. 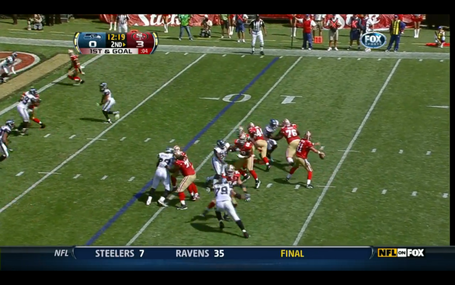 In this game, there was a simplistic offensive approach. Smith was rarely required to progress through his reads and didn't have a chance to display his field vision. He was simply executing plays rather than reading defenses and making adjustments. The only good thing Smith did in this game was refrain from turning the football over. 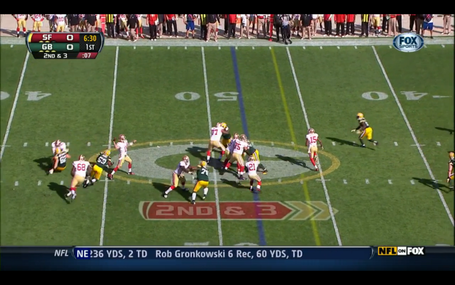 With Smith's throwing motion alone, there is a radical difference in his mechanics. Against Green Bay, Smith flaunted a much quicker overall release. He did this by developing a tighter throwing motion that was unique to him.

Smith is now holding ball higher, with a more traditional over-the-top throwing motion. He isn't holding the ball away from his body as much, which should better his release and make him less susceptible to turnovers.

It's also allowed him to put more velocity on his throws. The ball was not dropping near his midsection anymore, but instead he is now keeping it around his head. He appeared to shed fractions of a second off his throwing motion, which should ultimately make a substantial difference.

In Week 1 of 2012, Smith was clearly playing with more bend in his knees. He seemed more in control of his movements, whether it was in the pocket or outside. His drop-backs were crisper and he was stepping into his throws with authority. Smith's lower body movement looked rehearsed and fine tuned as if he had been practicing it. There was finally some consistency down-to-down. 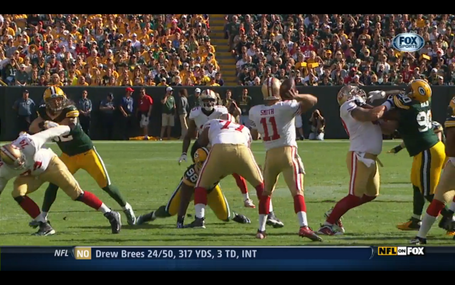 Smith now has a firm grasp on this offensive system, which has enabled him to play faster. He showed more command as the team's quarterback, and confidence as an individual player. Smith had a confident presence behind center, looking miles ahead of where was a year ago.