49ers Vs. Lions: The Wham Play On Coaches Film

Share All sharing options for: 49ers Vs. Lions: The Wham Play On Coaches Film

This past offseason, after years of waiting, the NFL finally decided to release the All-22 Coaches Film to NFL Rewind subscribers. The Coaches Film covers two types of coverage. One is a sideline camera that shows all 22 players on the field. This is a big help in watching secondary coverage and wide receiver routes. The second camera is from the end zone and shows basically tight end to tight end.

In looking at the latter camera view, it provides some great views to see run plays developing. Given the value of the Wham play in last year's 49ers win over the Detroit Lions, I decided to use that camera angle for some more breakdown. The iPad app for Rewind includes a telestrator function, which should help us in some of our film breakdown this year.

"Well, I made the call but it was so loud that Tully (middle linebacker Stephen Tulloch ) didn't get the whole thing," Cunningham said. "I thought it was coming and when I saw their personnel I knew it was coming and DeAndre Levy and Tulloch just smoked Steven Jackson.

Head after the jump for a breakdown of the two different Wham plays.

I'm going to post pictures at approximately similar moments in the play development from the 49ers version and the Rams version. The 49ers version is always first. On the 49ers two versions of the play, Frank Gore picked up 47 yards and 55 yards. On the Rams first offensive play, Steven Jackson picked up no yards. 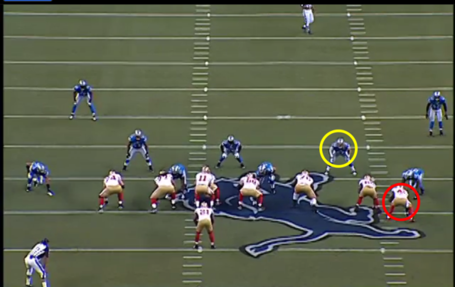 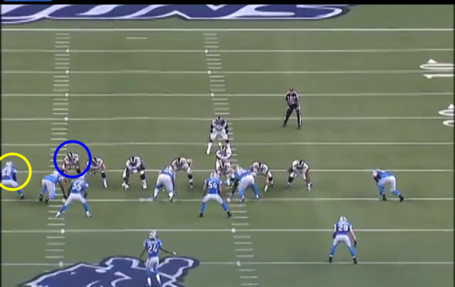 The 49ers line up heavy on the right with Vernon Davis on the line and Delanie Walker as the offset tight end immediately to Davis' right. The Rams ran basically the same formation.

On the other side (different viewpoints due to which side of the field each team was starting on), the Lions lined up against the 49ers in a fairly basic 4-3 set-up with the four down linemen and then three linebackers lined up in the gaps. In the Rams version of the play, the Lions lined up with one of their three linebackers (yellow circle) down next to the left defensive end. Gunther Cunningham claimed he knew what was up and adjusted the play-call accordingly. 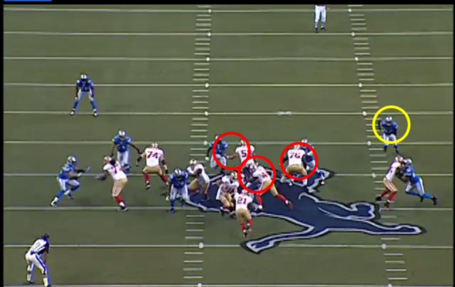 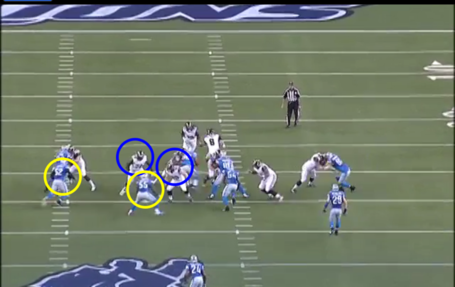 The next pair of pictures is right after the snap as the quarterback is preparing to hand the ball to the running back. The same camera angle would be preferred, but I think we have enough from these shots to make a decent comparison.

In the 49ers version, we see Anthony Davis (right red circle) engaging one linebacker, Jonathan Goodwin engaging another (left red circle) and Delanie Walker engaging Ndamukong Suh (center red circle). Vernon Davis has engaged the defensive end on the far right (forgot a circle), and above those two we see the safety (yellow circle) breaking for the line on the run play.

In the Rams version, the two blue circles represent the right tackle and the center. They are both moving towards the same man (Stephen Tulloch, no. 55 in the yellow circle), which will open a hole for Justin Durant (No. 52, far left yellow circle). One player I forgot to circle is the left guard (second Rams OL from the right) who is about to engage No. 54 (DeAndre Levy) from the side. 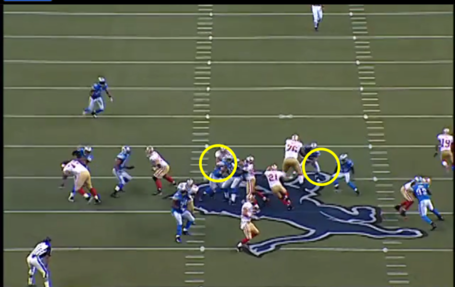 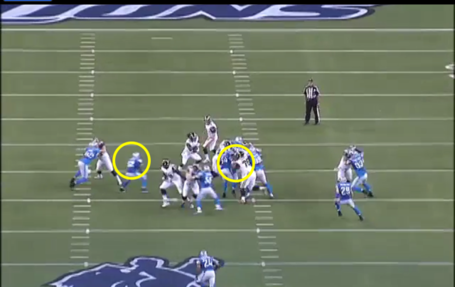 This final picture shows Frank Gore and Steven Jackson with the ball and looking to cut upfield. In the 49ers version, the left circle is Jonathan Goodwin blocking out the linebacker. Goodwin does not have the linebacker in front of him, but he has shuffled him to the left and out of Gore's way. The right circle is meant to show the poor angle available to the safety. Anthony Davis has his defender engaged, but due to his size, the safety is out position to get to Gore. From the normal camera view, the safety looks like he is simply slow in getting towards Gore, but as this angle shows, there's too much room for him to turn and pursue. Gore would cut to Davis' left and take the ball to the Lions 1-yard line.

In the Rams version, the left circle is on the wide open Durant (No. 52), who has little trouble getting towards Jackson. Although Jackson cuts earlier to avoid him, DeAndre Levy (No. 54, right circle) has basically been blocked towards Jackson. The Rams had no change to develop this play and Jackson was stopped.

There is no doubt in my mind that the 49ers will work to establish the run on Sunday. They had great success against the Packers and even with the new wide receivers, dominant rushing remains their MO. However, I think we can be fairly assured that they will mix in some new strategy when approaching the Lions. I suppose we could see the Wham play, but I have to think it would be set up by a separate kind of run from this package.

Looking at how the Lions defended the Rams, one option might be to mix in some reverse trickeration on the play. If they line up and appear to be running the Wham play, what if Alex Smith instead faked the handoff to Gore, and instead handed it off to a receiver coming around the back-end? A.J. Jenkins showed some great speed in preseason, so what about inserting him on the top side of the play and seeing what the reverse could get them?

Another option would be the fake handoff followed by a QB keeper around the the blocking Vernon Davis. I think the reverse has a bit more potential, but the 49ers could use this play to take advantage of Alex Smith's athleticism. I suppose Kaepernick could come in on the play, but that could potentially further give away an alternate to the Wham play.