The 49ers have made it through two weeks of the 2012 NFL season and been fairly fortunate on the injury front. Andy Lee and NaVorro Bowman suffered minor injuries in Week 1, but they were both able to play. Lee may have broken his thumb while trying to tackle Randall Cobb, but he was able to handle holding duties with relative ease. The team activated Scott Tolzien as the back-up holder just in case.

Brandon Jacobs and Ted Ginn Jr. remained inactive with their respective injuries, and I think it is safe to say that both would be welcomed with open arms to the active list. The 49ers were generally successful running the ball, but they seemed to have trouble on some short yardage work. Brandon Jacobs looked solid in the preseason and would bring some added punch to that part of the game.

Ginn is out with an ankle injury and would have been welcome in the kick return game. Kendall Hunter was unable to do much on returns, and had one fumble early after the Lions coverage unit kept him on his feet long enough to get the strip. I don't know what Ginn's future holds with the 49ers, but he still retains some value in this kind of key area. The 49ers have struggled in the field position battle, and Ginn could prove to be a cure for that ailment.

The real talk of the game on the injury front was the physical nature of the Lions. I call them physical rather than dirty, but there were some questionable issues throughout the game. Vernon Davis left for a stretch after getting poked in the eye. He returned and scored a touchdown, but he was off for an extended stretch early in the second quarter.

The big "injury" was really just a pop upside the nose of Alex Smith. The 49ers quarterback took a shot from safety John Wendling in the fourth quarter on a play that was called back because of holding. Smith ran around the right edge and slid but took a shot to the face from Wendling. It looked late, but there was some argument that it was a late slide by Smith. Whatever the case, it left Smith bleeding from the bridge of his nose. 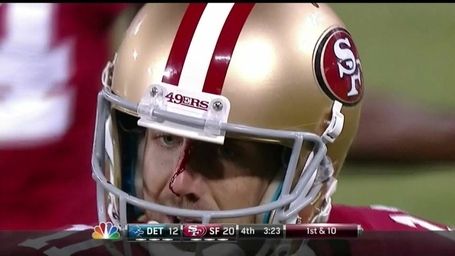 Smith wiped it off with a towel at one point, but the blood kept coming and he did not get it completely cleaned up until after the touchdown pass to Vernon Davis that put the final nail in the Lions coffin. Prior to the touchdown, there was a great shot that netted us this GIF:

For now the 49ers are in relatively good shape health-wise, and we'll keep our fingers crossed things stay that way. The 49ers have a talented roster of players, but personally I would prefer avoiding testing that depth any more than necessary.