49ers vs. Vikings: Percy Harvin had his way with the 49ers

Vikings WR Percy Harvin had a strong performance against the 49ers. We take a look at his two successful swing passes that gained first downs.

Share All sharing options for: 49ers vs. Vikings: Percy Harvin had his way with the 49ers

The 49ers dealt with numerous frustrating issues last Sunday against the Vikings. They had too many turnovers, the offense stalled out and blew some great Kyle Williams kick returns, and the defense was chewed up by Kyle Rudolph and Percy Harvin.

I wanted to focus on Percy Harvin in this post. It seemed like had the Vikings wanted to, they could have run the wide receiver swing pass all day long, and the 49ers would not have been able to stop it. In reality they did not run it all that frequently. They just had enough success each time that it seemed like a lot. It turns out from what I saw in the video, they ran the swing pass twice and then actually mixed in more wide receiver screens.

I decided to take a look at the two most notable swing passes. It turns out they were run from the same basic play (at least as far as the film shows us). In reviewing them, much like Jim Harbaugh said, it was some basic breakdown that put Percy Harvin in space. One does not want Percy Harvin holding onto the ball in space.

The first play was the second offensive play of the game, with 14:22 left in the first quarter. The next three pictures break down the opening of the play that netted Harvin 12 yards. Thanks to the Game Rewind All-22 on iPad, I got to have a little bit of fun with colors, arrows and circles. I was like a kid in a candy store! 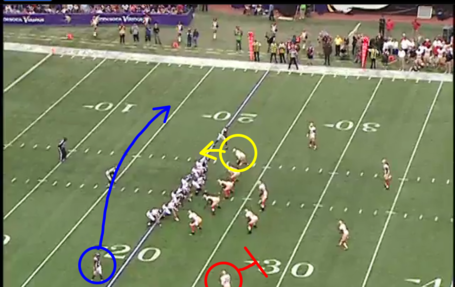 Harvin is lined up at the bottom of the screen (blue circle) and I believe that is Carlos Rogers (red circle) covering him. Prior to the snap Harvin began what looked to be a reverse. When Harvin went in motion, Rogers started waving his arm, which would appear to have been an indication for someone on the other side to keep an eye on him. He did that because he was playing zone coverage, dropping back a few spots.

The corner on the other side (not circled) drops back in what appeared to be man-to-man coverage. Aldon Smith (yellow circle) appears to be on a delayed blitz, although given Rogers zone coverage and hand-waving, he might have been the one who erred on this play. 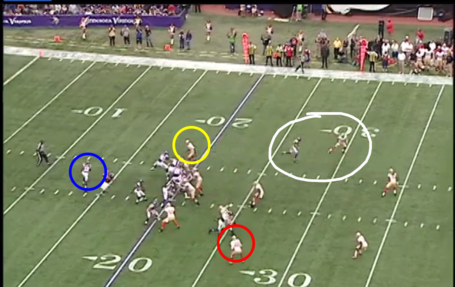 This second picture shows Rogers (red) in his zone, Harvin (blue) coming around the bottom, Smith (yellow) delayed for a minute and the other corner covering his receiver (white). Shortly after this second picture, Aldon Smith began pushing towards the quarterback. Looking at this picture, it seems like he probably should have been keeping a closer eye on Harvin and shutting down the back end of this developing play. 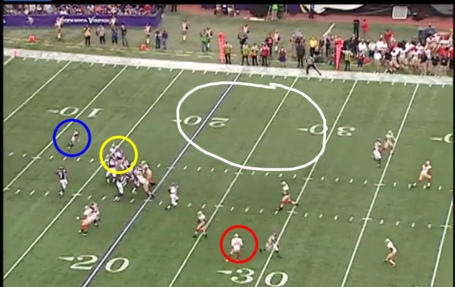 In this final picture, Aldon Smith (yellow) has engaged the offensive line in his attempts to get to the quarterback. This leaves some space for Percy Harvin (blue) to slide around the end of the line into space. In case you missed it, that white circle is all the open yards for Harvin.

We can't tell Aldon Smith's specific assignment for certain without knowing the play-calling on defense. However, in reviewing just these pictures, it seems like he was the one responsible for sliding outside on Harvin. None of us can say this with 100% certainty, but it seems like a reasonable inference.

On to the second play... 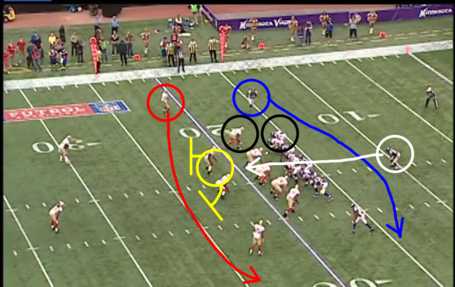 This second play sees the Vikings running what appeared to be the same play with 5:35 left in the third quarter. It picked up seven yards and the first down. As you can see, I got a little too crazy with the colors. Here is a breakdown by color.

Red/Blue: The corner is in man coverage. When Harvin (blue) began moving in motion, the corner immediately began crossing the field to mirror him.

Black: The two black circles mark the Vikings tight end and the 49ers outside linebacker that dropped in coverage on him. This wasn't essential to the play, but it did seem to clear some space and help to freeze the 49ers inside linebackers to some extent.

Yellow/White: The yellow is on NaVorro Bowman (to your left) and Patrick Willis (to your right). The white is Adrian Peterson coming up the middle as a potential safety-valve dump-off. 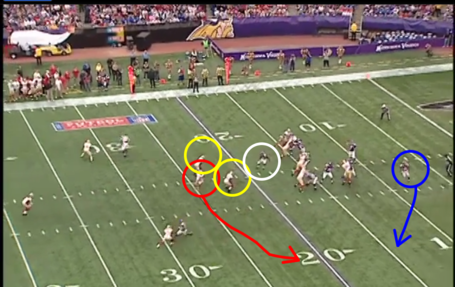 In this second picture, we see Peterson in the middle just past the line of scrimmage, with Bowman (left) and Willis (right) both eyeing him. They both appeared to be in a zone type of coverage as they were waiting on Peterson. The problem is that the 49ers corner is behind them trying to get to Percy Harvin, who again has space. The 49ers corner was coming at a poor angle, and an open Harvin was able to scoot for the first down.

In this second version of the play, it seems like Patrick Willis probably should have cut over to cover Harvin coming out of the backfield. Again, we cannot say what should have happened with 100% certainty because we don't know the intended assignments. However, just based on these plays, Willis would seem to be the proper man to hep on this play. His role could have meant looking for somebody else coming off the line, but it would appear that all pertinent parties were covered or otherwise engaged.

In looking at both of these plays, it really does just seem like a mental mistake by Aldon Smith and Patrick Willis. While I am not certain of that, the film seems to reveal that to a certain extent.