Will Tukuafu, Isaac Sopoaga And The Part Time Fullback

Share All sharing options for: Will Tukuafu, Isaac Sopoaga And The Part Time Fullback

When the 49ers head into Green Bay this Sunday, Bruce Miller will be the starting fullback and will likely see a good deal of playing time. However, as we learned last year, Coach Harbaugh loves to get creative with his big guys. Last season the 49ers used Isaac Sopoaga rather frequently as a blocking back, with Justin Smith also working in some time. Combine that with the extra use of heavy packages with Alex Boone and the third tight end, and this was a team that liked to throw its weight around, literally.

This year, there is a good chance we could see Will Tukuafu fill Ice's role as the primary defensive player working at fullback. Although Sopoaga did solid work in the role last year, Tukuafu got all sorts of time as a fullback this preseason, and showed quite a bit of success.

After the jump, I've got couple pictures of his big blocks against the San Diego Chargers this past week.

In this first one, Anthony Dixon scored a touchdown through a huge hole, set up in part by Tukuafu (No. 92) and to the right of Dixon. He engaged Takeo Spikes and had little trouble keeping him out of Dixon's way. 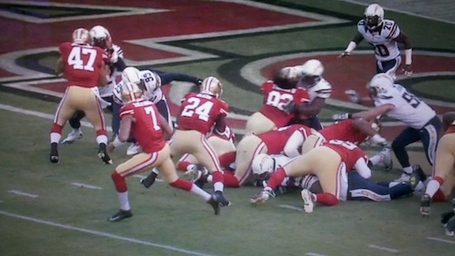 In this second picture, Tukuafu (partially hidden by Josh Johnson) engages linebacker James Mouton and absolutely blew him out of the way. He got him stood up and then basically spun around as Anthony Dixon scampered around the two of them for six yards. 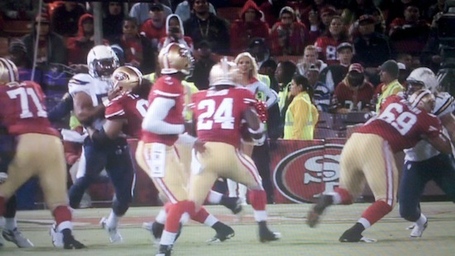 We'll find out this week if this means Isaac Sopoaga will not play the "Ice" role nearly as frequently, if at all in 2012. Tukuafu had great success, and given the fact that he would otherwise not be getting a ton of playing time on defense, this is one way to get the athletic big man on to the field.

Fooch's Note: There are a couple fun quotes from after Thursday's game:

Coach Harbaugh on the second block:

"I could hear it more than I could see it. Saw it, but I was more impressed with what I heard. Just textbook. It was just textbook block."

Justin Smith on the block (per Eric Branch):

"He was crushing people. You could hear it, you didn't have to see it, you could hear it. Pretty impressive. I know I wouldn't want to take on a 295-pound fullback. I'm sure Green Bay's hoping he's just a gimmick and they won't use him that much because he put some pretty impressive stuff on tape."