49ers vs. Packers: Discussing the Niners' Familiarity with Green Bay

Share All sharing options for: 49ers vs. Packers: Discussing the Niners' Familiarity with Green Bay

The San Francisco 49ers are just two days away from their match-up with the Green Bay Packers at Lambeau Field. After what seemed like an eternity of waiting, the regular season is at our doorstep, and what a better way to kick it off than with a heavyweight bout between two dominating forces in the NFC.

Even though these teams do not regularly face-off, there is quite a bit of familiarity between them. Despite their polar-opposite team identities, there is some common ground and understanding to be found between these two.

In the case of the 49ers and Packers - including their current coaching staffs and players -- there are some real small world coincidences. And no, I'm not just talking about Michael Crabtree and Packers backup QB Graham Harrell being reunited this weekend.

For a logistical breakdown of the 49ers and Packers, including their nostalgic and repeated crossing of paths, follow me after the jump.

From 1987-1993, Michigan's Jim Harbaugh was the starting quarterback for the Chicago Bears. The Green Bay Packers are one of the more storied franchises and have been a division rival of the Bears since the beginning. As the Bears QB, Harbaugh played the Packers a total of 14 times.

In a number of visits to Lambeau as a member of the Bears, Harbaugh won 5 of 7:

For an atmosphere that has intimidated many for decades, Harbaugh doesn't seem to get rattled at Lambeau. Hopefully he carries this approach over as a coach, and implements his old thought process with the Niners.

San Francisco is not the kind of team to allow themselves to be intimidated. Additionally, Harbaugh's familiarity with the playing grounds in Green Bay should help the 49ers, who were road warriors in 2011.

Harbaugh -- along with tight ends coach Reggie Davis and asst. secondary coach Greg Jackson -- were all teammates with Packers secondary coach Darren Perry on the '99 Chargers. 49ers QB coach, Geep Chryst, was the quarterback coach and offensive coordinator that year.

From 1998-2004, first-rounder Randy Moss was a member of the Minnesota Vikings, leading that historically electric offense. Like his now-head coach, Moss was a division rival of the Packers.

During his career as a Minnesota Viking, Moss played at Lambeau 8 times.

Counting the games Moss has played at Lambeau, he averages: 4.2 catches, 78.2 yards and .8 touchdowns per game. He has had more individual success than team success on the road at Green Bay. In fact, Moss has more touchdowns (13) against the Green Bay Packers than anyone else in NFL history. 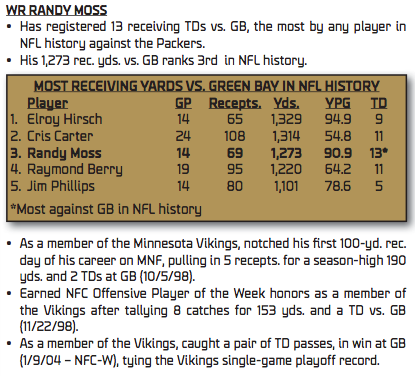 Besides being a regular visitor at Lambeau, Moss is very familiar with Packers defensive back Charles Woodson.

Well I know that Charles is playing safety and he is the nickel back on their three-wide's, four-wide's package. But you know, Charles Woodson, I've always followed his career. We came in together, we was at the Heisman together, we was the on the high school Parade first-team All-American together. So you know, I followed Charles throughout his career, his collegiate career and I'm very happy to see Charles doing what he's doing, and still doing it at a high level.

Not much later, Fangio signed on to be the defensive coordinator of the Carolina Panthers in 1995, with Capers as the head coach. This stint ended in 1998, but was later rekindled in Houston, when Capers took the head-coaching job and once again hired Fangio to run his defense.

The two have built a rapport, and obviously had a productive working relationship. They carry similar styles and defensively, they approach the game the same. Both coaches have grown fond of the 3-4 defense; running it successfully for decades in this league.