The start of the NFL season means more random news for the fine folks at TMZ to break out for us. And we get a 49ers story right off the bat from the TMZ staff.

According to TMZ, Aaron Rodgers is friends with Boyz II Men and asked them to perform the National Anthem at tomorrow's 49ers-Packers game. Boyz II Men agreed on one condition by Nathan Morris. Morris, who TMZ describes as "the guy with the deep voice", is reportedly a huge 49ers fans. He apparently suggested a bet with Rodgers. If the 49ers win, Rodgers must wear an Alex Smith 49ers jersey for the remainder of the week. If the Packers win, Morris has agreed to wear a Rodgers jersey.

TMZ is reporting a rep for the band has confirmed the bet.

I have to say, that is a pretty ballsy wager by Rodgers. I'd imagine he is confident about his team's chances at home against the 49ers, but even still, this is quite the wager.

Of course, we already know one guy who knows how to sport an Alex Smith jersey. Thanks to wjackalope for one of my favorite game thread pictures ever, after the jump. 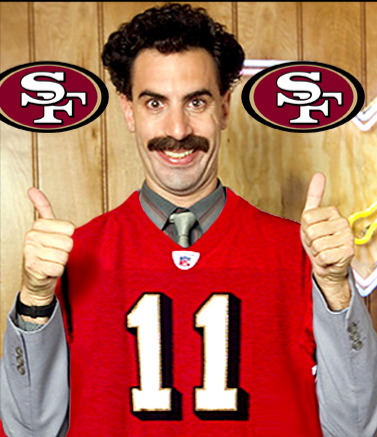