2013 NFL playoffs: What can Delanie Walker provide the 49ers?

Delanie Walker has become a receiving threat over the past month, but has also dropped some passes. So why are we calling his number? And what does it mean for this Saturday's game with Green Bay?

Share All sharing options for: 2013 NFL playoffs: What can Delanie Walker provide the 49ers?

Delanie Walker is an important part of one the best run-blocking units in the league. But over the past month we have becoming ever-so-suddenly familiar with a different side of the second-string tight end: the receiving side.

Over the past four games, Walker has 158 receiving yards. He also has at least two dropped passes and a touchdown or two left on the field in that time; and while Vernon Davis leads the team in yards per target, it is Walker who has received the most looks since Colin Kaepernick took the helm at quarterback.

According to Pro Football Focus, who give every player a grade for plays they are involved in, Walker is the worst receiver on the 49ers this year at -5.6. For reference purposes, that's good for 60th in the league behind pretty much everyone.

In the link above, you can see that while Davis (as of early December) is among the top 10 in drop rate, Walker is in very last place with an absurd drop rate of 36.8.

Yet, over the past month, Walker has emerged as a more productive receiver and has earned more targets than Davis. What gives?

So we took to the All-22 to figure out an answer.

The film, and some other bits of data, give a good idea, in my opinion, of both Delanie's emergence as a receiving threat and why such an emergence was necessary.

Hopefully this Saturday is the payoff to another Jim Harbaugh calculated risk.

Here we have a play call meant to take advantage of all the deep room the Cardinals were giving us in Week 17. 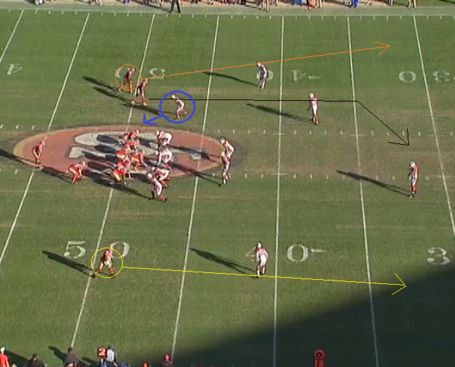 Walker is on top (orange), with Davis (yellow) on bottom. Crabtree is the black route.

If you read my two previous All-22 posts from this week (on Crabtree and Gore, respectively), you'll notice some similar things in these two plays as with those:

The play-call takes advantage of the lack of deep help by sending everyone deep. It's the kind of boom or bust play that we have been using a bit more often with The Kid under center. It's lowered his completion percentage, but maintained his yards per attempt enough to justify it - and, ideally, it has also made us a bit harder to defend.

Now's the time of year when these sorts of things need to pay off. Against Arizona, it did. 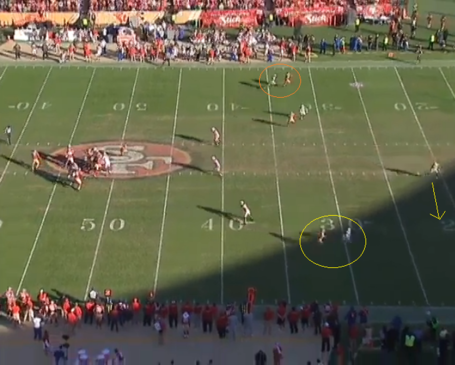 Though that doesn't mean it was easy. Walker (orange) is open right now but Kaep did not have much of a pocket to step into. The pocket was there, but it was collapsing. He chose to bail outside before Delanie emerged past his man.

He rolls outside and eventually does what he does so well: makes a throw down-field while running to his left. Walker comes back to the ball to catch it for 23 yards.

Notice all the attention Vernon (yellow) is getting over the top. Had Kaep had a slightly better pocket for a moment longer, this is a touchdown because no one was worried about Walker deep. Every defender on the field has their back to him, except the one chasing his heels.

Walker had two receptions on the day, totaling 50 yards. Here's the second one showing us a lot of the same from both San Francisco and Arizona; and giving us, in my opinion, a lot of insight into Delanie's purpose in this offense. 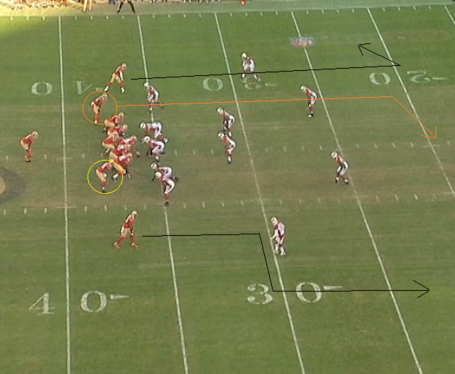 Again, Walker (orange) is running deep. The LB lined over him is not really on him, as again he will end up pass rushing. This places the safety over the top of Walker in charge of covering him (the orange line goes right through him).

Crabtree (bottom) and I believe Jenkins (top) are going deep. Crabtree runs a quick out and then turns it up-field;Jenkins is running a deep comeback out.

Vernon (yellow) is running a block route! lol, so he will just stay tight and protect Kaepernick. Bet Arizona never saw that one coming! A play like this makes me believe that Walker's number is really being called more because the coaching staff knows they need Walker to be a threat if we want these next three games to go well.

The inside LBs are in zone and the safety not responsible one-on-one for Walker is going to protect anything deep.

And that's what he does... except, once again, the wrong route. 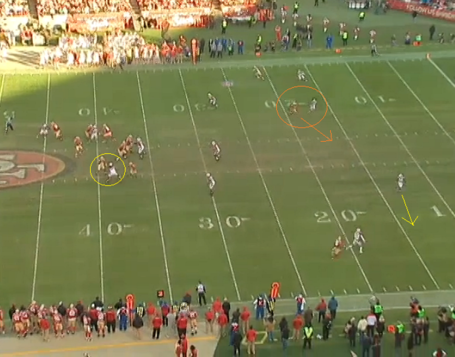 With Davis staying back to block, you'd think Arizona might pay more attention to Delanie. But, again, their play call covers the shallow middle (ever weary of the run, I suppose), and their one deep safety is more concerned with Crabtree than anything else.

As with the last play, everyone has their back to Walker except the man on the wrong side of him. Kaepernick throws a dart over the middle linebackers outstretched hand for a 27 yard pass.

(notice Jenkins is open on this play, too! So there is hope that he may do something in the playoffs. For an in-depth, coach's film look at Jenkins so far, check out David Fucillo's post from yesterday)

What we can at least take from this is the knowledge that Delanie is able to get open when left one-on-one, which was a huge problem for our receivers last year. And if Vernon takes up two men every play, that is all you really need Delanie to do.

Catching the ball helps, too, of course - and, until he does, no advanced metric (or standard metric) is going to sing Walker's praise as a receiver. But sometimes stats don't tell the whole story. Walker is a weapon, though an inconsistent one. On film, he is doing what San Francisco asks of him and getting open. The 49ers are calling his number more and are turning him into a threat because they need him to be one.

His drop rate is scary, yes, but the potential is there; and eventually it will pay dividends. Since Kaepernick's first start, Delanie Walker is averaging over 18 yards a catch. Only three other receivers with at least 10 receptions managed such a number on the year. So it may only be a month of data, but it is a month of hopeful data.

Remember, Delanie is a second string tight end whose best asset is run-blocking. His coming-to-form this past month as a receiver is probably as surprising to him as it is to us. With injuries to Kyle Williams and Mario Manningham, however, the fact that Walker has been able to emerge as a receiver at all should be viewed with optimism.

At worst, unlike last post-season, we now have three legitimate wide receiving threats despite our injuries at the position. Consider us very blessed in that regard, and keep your fingers crossed that Delanie either catches a touchdown pass this Saturday, or that Green Bay has noticed his stats in the past month and sends just a bit more attention his way.

Walker will make them pay if they don't. Count on it. And that's all the likes of Crabtree and Davis need to have an explosive game of their own.

Indeed, my fellow Niners Nation maniacs (members? citizens? peeps? we need a nick name), it would increasingly appear that San Francisco finally has a proper receiving corps, and (hopefully) three more games to show the NFL, as we showed New England, that we can beat them with it.