On this edition of The Booth Preview, the San Francisco 49ers will travel to the Georgia Dome to face the Atlanta Falcons in the NFC Championship Game. What challenges lie ahead? Read on, Faithful.

Share All sharing options for: The Booth Preview - NFC Championship Game: "Five things about the Falcons"

I won't even sugarcoat it: the San Francisco 49ers gave the Green Bay Packers a good, old-fashioned ass whoopin'.

Considering the Niners gift-wrapped a pick-six on their first offensive drive, and the Packers scored a meaningless touchdown late in the game, the final score of 45-31 should have been considerably more lopsided than what it actually was. Personally, I would chalk up the shellacking to bad karma for a certain Aaron Rodgers failing to honor a certain bet, but that's just me.

For the Niners, their next stop is Atlanta.

San Francisco advances to the next round to face the Atlanta Falcons in the NFC Championship Game this Sunday. The Falcons were able to stave off a late resurgence by the Seattle Seahawks for the right to host the NFC title game. The winner of that game will obviously represent the conference in the Super Bowl. As we head into the weekend, I thought it important to get better acquainted with the enemy.

As such, I present to you: "Five things (I think) about the Falcons."

1.) THEIR RECORD DOESN'T REFLECT THEIR RANK

The Falcons finished the 2012 regular season with an NFC-best 13-3 record, earning them a first-round bye and the top seed in the playoffs. But somehow, I'm not impressed.

Don't get me wrong. A 13-3 record is an impressive feat for any team, any season, but upon a closer look, the Falcons don't seem to be the unstoppable juggernaut that their record suggests they are.

They recorded wins against the Denver Broncos and Washington Redskins, who both made the playoffs this year, but those match-ups came in Week 2 and Week 5 before Peyton Manning and Robert Griffin III truly began to pick up steam. By the end of Week 5, both the Broncos and Redskins held a 2-3 record. Every other team the Falcons faced in the regular season missed the playoffs. 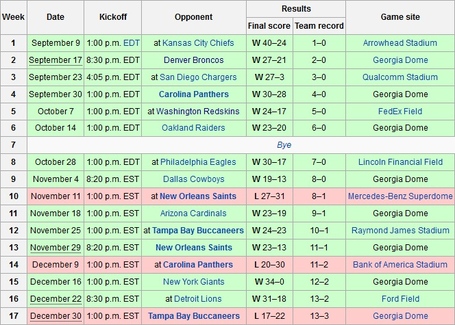 The only victory on the schedule that truly impresses me is the dominant 34-0 shutout of the New York Giants in Week 15. Aside from that, wins against teams like the Kansas City Chiefs, San Diego Chargers, Oakland Raiders, Philadelphia Eagles, and Tampa Bay Buccaneers just aren't enough to bowl me over.

2.) THE FALCONS, OFFENSIVELY, ARE RATHER SIMILAR TO THE PACKERS

Statistics would suggest that, when it comes to offense, the Falcons are basically the Packers on steroids. What the Packers do well, the Falcons do better. Both teams field an impressive aerial attack, and both rank near the top of the league in regards to passing production. 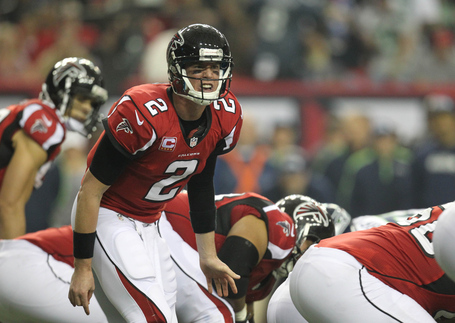 Make no mistake about it; the Falcons are absolutely loaded on offense.

When it comes to wide receiver tandems, there's no better one-two punch combination in the league than Roddy White and Julio Jones. The latter compares favorably to San Francisco's own Michael Crabtree. While White is technically the team's primary receiver, Matt Ryan looks to Jones often on short passes and designed receiver screens to take advantage of his ability to move well in space and produce yards after the catch.

And then there's the matter of tight end Tony Gonzalez. The future Hall of Famer will prove to be quite a handful. Gonzalez doesn't have the blazing speed of Vernon Davis or Delanie Walker, but he is sure-handed, ridiculously athletic, and gains separation. If the Falcons can get into the red zone, you better believe Ryan will be looking the way of Gonzalez.

However, where the Packers are lackluster, the Falcons lack even more so. On the ground, both teams leave much to be desired.

Michael Turner has lost a step this year, but he's still a crucial element of Atlanta's red zone offense. Matter of fact, all ten of Turner's rushing touchdowns have come in the red zone. Seven of his ten rushing scores have been from three yards out or less. Don't be surprised to see Atlanta stacking the line with Turner in the backfield if they come within five yards of the end zone.

Meanwhile, his counterpart, Jacquizz Rodgers, has played a larger role this season in Atlanta's ground attack. Rodgers had his most productive performance of the year last Sunday against the Seattle Seahawks. Responsible for a 45-yard gash against Seattle's typically sturdy defense, Rodgers is deployed almost identically to how the Niners use LaMichael James. Both are small, slippery change-of-pace backs.

3.) THE ANOMALY THAT IS ATLANTA'S DEFENSE 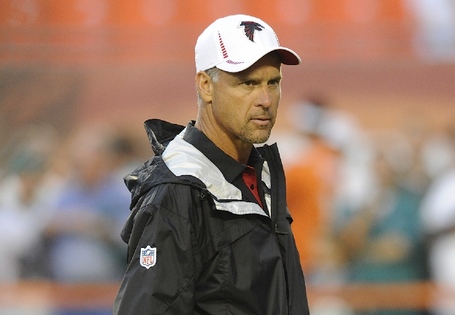 Mike Nolan, now the defensive coordinator for Atlanta, was the head coach of the Niners from 2005-08. Nolan's tenure in San Francisco was rather underwhelming as none of his squads ever cracked the .500 mark. He was eventually fired halfway through the 2008 season after a four-game losing streak and replaced by Mike Singletary.

The only current offensive players for the Niners that were on the team in 2008? Alex Smith, Frank Gore, Vernon Davis, Delanie Walker, and Joe Staley. Crazy how much has changed, huh? Obviously, Nolan's familiarity with Gore, Davis, and Walker will prove to be beneficial in game-planning for the Niners, but just as the roster has changed substantially since his time in San Francisco, so has the offensive philosophy. Nolan will have to account for a guy named Colin Kaepernick and the pistol read-option offense. More on this later.

Nolan's defensive unit ranks 21st in the league defending the run. They've allowed a total of 1,971 yards on the ground, an average of 123.2 yards per game, and 16 rushing touchdowns. Somewhere, Frank is licking his chops.

Against the pass, things get a little weird.

In regards to yards allowed through the air, Atlanta ranks 23rd in the league. I suppose facing Drew Brees twice a year will do that to you. They've surrendered 3,878 total passing yards and give up an average of 242 passing yards per game. However, that same unit has only allowed 14 passing touchdowns all season - best in the league. They're also responsible for 20 interceptions, tied for 5th most in the league.

This statistical paradox starts to make a bit of sense when you look at their secondary which features cornerback Asante Samuel. Having watched Samuel for years while he was in Philadelphia, I'm somewhat privy with his style of play. Samuel is a classic case of a route jumper. That is, he has a habit of guessing the route of the receiver. More often than not, he's right, and he'll be in a position to make a great play. However, when he's wrong, he gets burned big time.

The Falcons' secondary is an opportunistic unit, and Kaepernick cannot afford to be hasty in his decision-making. Remember the ill-advised pass intercepted by Sam Shields last Saturday? That's what I'm talking about. Speaking of Kaepernick... 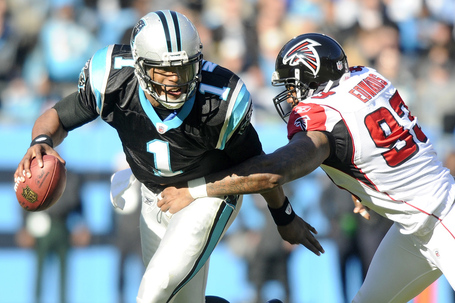 CHARLOTTE, NC - DECEMBER 11: Quarterback Cam Newton #1 of the Carolina Panthers pulls away from Ray Edwards during the game against the Atlanta Falcons at Bank of America Stadium on December 11, 2011 in Charlotte, North Carolina. (Photo by Jared C. Tilton/Getty Images)

The bad news? The Falcons have faced their fair share of mobile quarterbacks this season. The good news? They've done a modest job at containing them.

In Week 5 against the Redskins, Robert Griffin III was held to just one rush for 7 yards, but he was also forced to leave halfway through the game with an injury. In Week 8, against the Eagles, Michael Vick rushed 7 times for 42 yards.

Against the Panthers' Cam Newton, things got a little out of control. In two games, Newton passed for 502 yards and 4 touchdowns, and rushed for 202 yards and and a pair of touchdowns.

And most recently, in the Divisional Game against the Seahawks, Russell Wilson rushed seven times for 60 yards and a touchdown.

This spells good things for the pistol-happy Niners with Kaepernick at the helm. Kaep almost singlehandedly demolished the Packers' defense and shattered a couple of league records in the process. 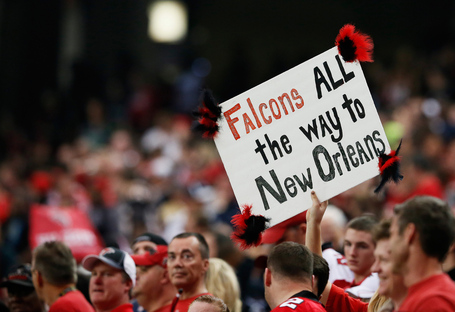 ATLANTA, GA - JANUARY 13: An Atlanta Falcons fan holds up a sign during the NFC Divisional Playoff Game against the Seattle Seahawks at Georgia Dome on January 13, 2013 in Atlanta, Georgia. (Photo by Kevin C. Cox/Getty Images)

I'm not one for superstitions, but there's the bizarre and disconcerting pattern of coming out flat and losing (or tying) every third game of the season. Are the players and coaches aware of the curse? Who knows. But if it is to strike again, it's scheduled for this weekend's NFC Championship Game.

And of course, it's the second consecutive year in which the Niners made it this far. The question is, will they be able to overcome last year's heartbreaking loss against the Giants that cost them a trip to the Super Bowl? In my mind, the team will either shake off the nerves or succumb to their demons. We will see.

However, one obstacle that is being overstated is that of Atlanta's home-field 'advantage.' Yes, it is true that the Falcons were 7-1 at home this year in the regular season, but looking at the margins of victory, it could have very easily been a different story.

Omitting the single outlier that is the Giants game in Week 15, these were the margins of victory in the Georgia Dome this season, including last Sunday's win over the Seahawks:

With the exceptions of the Giants and Saints, seven of the Falcons' nine home games were won or lost by the difference of a single possession. If the Niners can come out and score early and quell the crowd noise, their chances of victory are that much greater.

Regardless of what I've written, let me make this clear: the Falcons are no pushover by any stretch of the imagination. Matt Ryan, who only just recorded his first postseason victory ever last Sunday, is hell-bent on proving his critics wrong. Veteran Tony Gonzalez has been starving for a Lombardi trophy since he came into the league 16 years ago.

This team is hungry, and they're going to be competitive...but the same can be said of the Niners. Colin Kaepernick must be desperate to prove that Coach Harbaugh didn't make a mistake in promoting him. And San Francisco has their own veteran searching for a ring in Randy Moss.

One thing I know for sure - it's going to be a fight.