The definitive look at Atlanta's defense and why San Francisco will beat it - we take a look at the coach's film to exploit whatever weakness we can find.

Share All sharing options for: All-22: Beating Atlanta's Defense

I've been thinking recently that these All-22 posts are a bit too cold and machine-like. That's what happens when you spend a few hours staring at silent shots of little, blurry men moving around on a screen (I put on music to help with my sanity. Recently, it's The Kinks' "Arthur..." and "Village Green Preservation Society" over and over again).

Therefore, let me spice things up a bit heading into today's NFC Championship Game by beginning with some bold declarations and then proceed to (attempt to) show why they will happen:

1. Colin "The Kid" Kaepernick will break a 40+ yard run, despite Atlanta's zone defense.

3. LaMichael James will rack up more yards than Frank Gore.

4. Randy Moss and Kaep will finally connect on a deep pass.

Boom! Alrighty. Now on to the other stuff!

In two appearances this year verse the Falcons, Carolina quarterback Cam Newton was 38 of 59 for 502 yards, with 4 touchdowns and no picks. Good for a yards per attempt (Y/A) of 8.5 and a passer rating of about 115. Both are superb numbers. He also had 18 rush attempts for 202 yards and another 2 touchdowns.

And anything they can do, Colin Kaepernick can do better.

To end the season, Kaepernick led all NFL quarterbacks in Y/A at 8.32, and I don't need to remind you of what he did last week against Green Bay on the ground.

In case you were wondering -- because you know you were -- Alex is 5th at 7.97. If there is one thing that "The Switch" has led to, it's more explosive plays. Despite completion percentage taking a dip, Kaep's Y/A is a good amount better than Alex's because we are completing more plays down-field than before.

Luckily for San Francisco, the "big play" is something the Falcons' defense has been susceptible to this year, giving up 99 plays of 15+ yards through the air this year. Good for 6th worst in the league, at a rate of roughly 6 a game.

Last week, against Seattle, Atlanta gave up another 6 plays of 15+ yards. Expect this "6" trend to continue tomorrow when Kaepernick is able to use a very explosive play-action to create opportunities down-field.

And when The Kid gets his shots, he rarely misses them. According to Pro Football Focus, Colin Kaepernick is 7th in deep shots of 20+ yards per dropback, at about 15%, meaning we are taking more chances down-field than most teams in the league. Newton is 9th (13%) and Wilson 2nd (16.3%)

But when it comes to accuracy, Kaep is blowing everyone else out of the water. Of his 33 attempts that traveled at least 20 yards, he has completed 19 of them. That in itself is good for first, but if you combine his 1 drop it makes him 20 for 33, or about 60% (and I think PFF is being conservative with their drops here, because I remember more than 1 off the top of my head).

Thus, despite Kaep and Moss just barely missing on some deep plays over the past few weeks, expect them to finally connect on one tomorrow. Atlanta is giving it up, Kaep is accurate enough to make them pay, and you have to believe Moss wants that ring bad enough to do his part as well.

But while I expect Moss and Kaep to connect on something deep near the sidelines, I expect that to be opened up when we exploit the middle of the field with a man who has been missing recently: Vernon Davis.

Atlanta will play lots of zone on Sunday. This is going to give Kaepernick some different looks, but it's also going to help contain him as a runner.

How do you do that?

One good way is to throw out of heavy formations, something San Francisco not only excels at, but something they do with more looks and disguises than anyone in the league.

On this play from last week's Seattle/Atlanta game, we have a play-action that does exactly that. First of all, because Atlanta has to respect the Seahawks' dominant offensive line and run game, they commit 8 to the box often. We see that here: 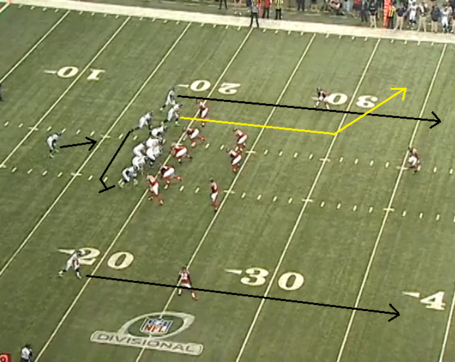 Lynch will receive the fake hand-off out of the backfield, bringing the linebackers in; while two receivers near both sidelines will drive their respective defenders back and also occupy the one safety (forcing him to make tough decisions about who to help).

In the mean time, tight end Zach Miller (yellow) is running a corner route that will capitalize on the space created in the middle of all that. 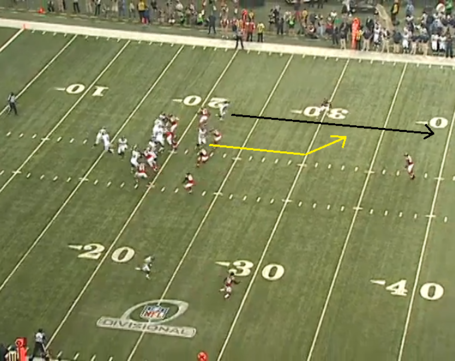 So here we have all the linebackers in the middle of the field on their heels, at least somewhat fooled by the play-action. Miller is about to run by them into a large amount of space over the middle. 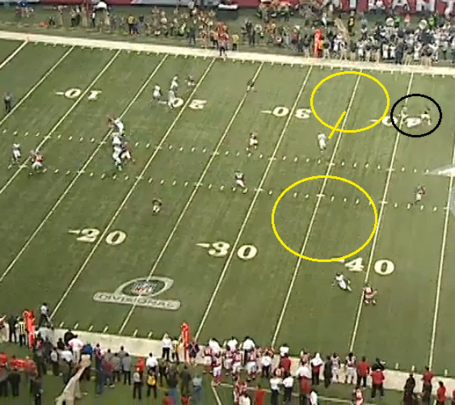 By the time he gets free and cuts for the corner, the receiver on his side has taken his DB deep (black circle).

Wilson will complete the pass a moment later. What's nice though, is this could have been a corner or post route - either way, capitalizing on the large strip of space between the shallow and deep zones is the important part. Anything where the yellow circles are is pretty wide open.

And against Seattle last week, tight end Zach Miller had 8 receptions for an astounding 142 yards, also with 1 touchdown.

Point is, Vernon Davis will have a big day as Atlanta tries to account for Crabtree and Moss on the outside and deep, and Gore/LMJ/Kaep in the run game.

Just like the play above, Greg Roman and Jim Harbaugh will be able to call streak routes up the sidelines, with Vernon running posts/corners/"seams" in the middle, and it will exploit the space between the shallow/deep zones in Atlanta's zone defense.

I expect Davis to have a huge game today. 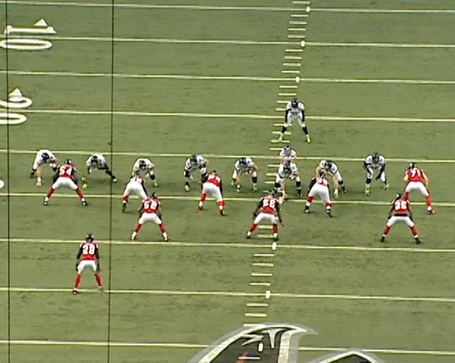 Much like the last play, this is a heavy formation that screams run. This is not play-action, but it achieves a similar affect by forcing Atlanta to put 8 in the box.

An hour from now, Atlanta will have to do much of the same to respect our run game.

The three men on your far left (right side of the formation) are running pass routes. This is a pass play out of a heavy formation - something the Niners do better than anyone. 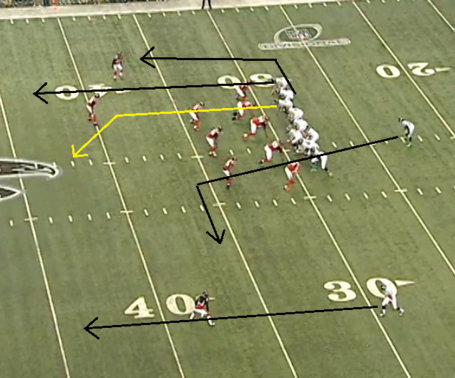 Again, the outside routes are deep, and they drive the zone coverage deep and to the outside. They force Atlanta to account for things near the sidelines.

And again, Miller is going to run a route over the middle. This time, it's a post. 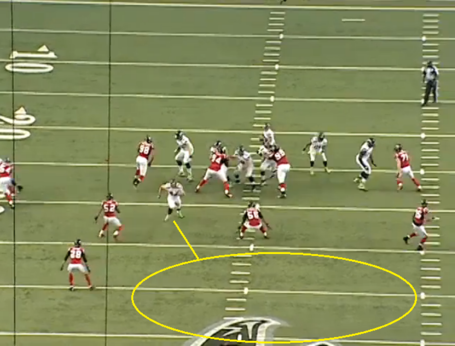 8 in the box means things get open deep, so expect The Kid to hit on these routes more than once. Just like the last play, at least one of the Atlanta linebackers is on their heels, not at all prepared to deal with Miller.

He will take advantage of all that space over the top of them. 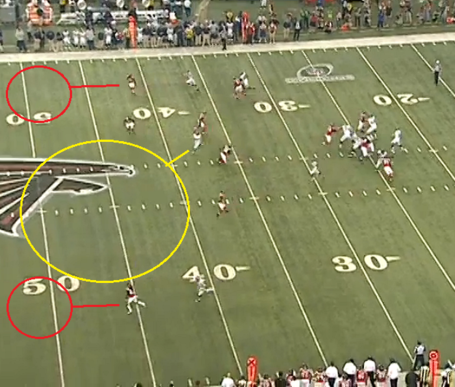 So you get this. With everyone sucked towards the line, these deep plays will be open. Delanie might benefit from it as much as Vernon, and he will likely have to deal with less coverage, but I truly believe today will be Vernon Davis' day.

Last week against Green Bay, Kaepernick was able to garner so much yardage without a hand being laid on him because of the Packers' man coverage.

When the defensive backs have their, um... backs... turned to the offense, it's a bit hard to contain a fast athlete like Colin. One mistake at the linebacker level, one man fooled by the option or put into coverage on a flooding back, and next thing you know the quarterback is running past you into an empty abyss of grass.

Atlanta will have a better time dealing with huge Kaepernick gains because they will play more zone. Their DBs will be keeping an eye on him. But just because they'll see Kaepernick start running before Green Bay did, it doesn't mean they'll stop him.

Over the last three seasons, Asante Samuel has missed more tackles than anyone in the league - and he didn't do much better this year: missing 21, and leading an Atlanta unit that is not known for its tackling, with six defenders missing at least 10 tackles during the regular season. 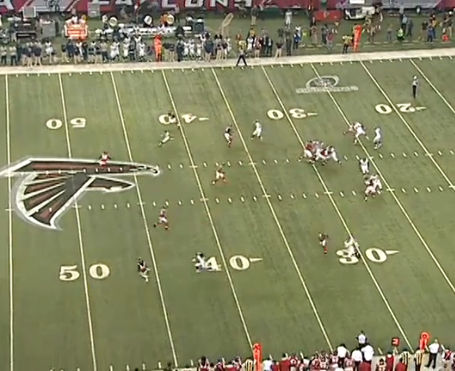 On this play, Atlanta has everything deep covered well. Wilson has nowhere to go with the ball. 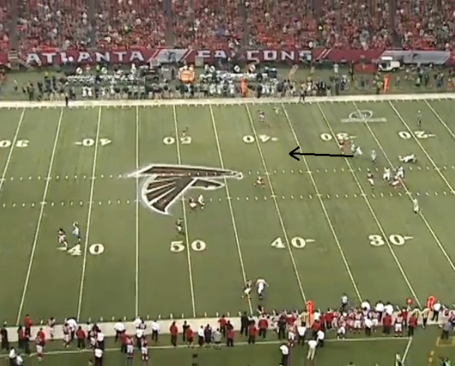 So, eventually, he tucks it and runs. But, as you can see, thanks to the Falcons' zone defense, he does not have any huge lanes. Sure, he might pick up 10 or so yards when a play breaks down like this, but he is not going to explode for any serious gains.

Since every Atlanta defender ultimately has their eyes on the quarterback, it assures getting burned by his legs cannot happen.

All they have to do, when they see him running, is finish the tackle... 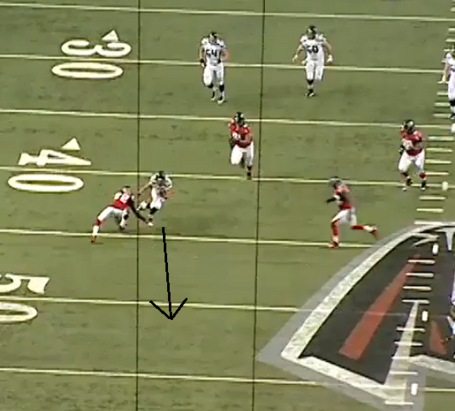 But Samuel will whiff on this play and let Wilson pick up 5 more yards. It is a fact that Kaepernick is more elusive than Wilson.

It's also a fact that Crabtree is more elusive than any Seattle receiver, and his YAC this year, along with his ability to pick up first downs when the throw is shallow, proves that.

Which brings me to LaMichael James. Gore is still the king of patience in the NFL, as I cannot think of any other back who follows his lead blocks as well as The Inconvenient Truth - but I expect LMJ to have his number called today so that he can take advantage of Atlanta's notorious tackling problem.

James' ability to juke and make defenders miss will come in handy today.

So what of the fourth? How will Kaepernick break a 40+ yard run if Atlanta plays zone? Missed tackles might let him pick up 15 instead of 10, but how will The Kid really hurt them for a big gain with his legs? 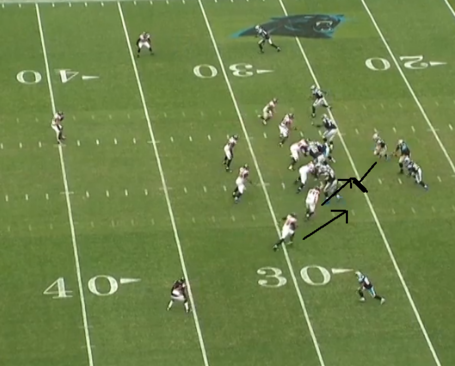 When Atlanta blitzes, they will leave less help deep, giving them less zone coverage and more defenders behind Kaep when he bails.

Here, much like against Seattle, and much like what we will see today, Atlanta has 8 in the box. But they are also on a blitz.

Cam had two big games against them on the ground, and 70 of his yards in their first outing came on this play. 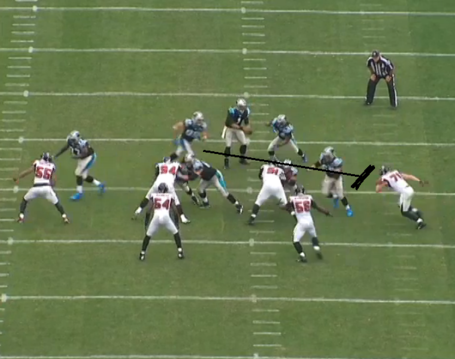 #71 is fooled by the option, allowing the blocker out of the backfield to level an important one on the blitzing linebacker. 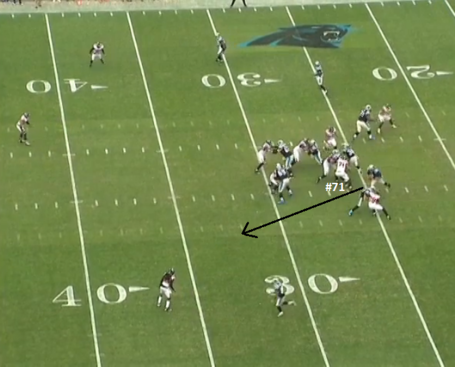 Newton will receive a nice block by his receiver on the outside - something Ginn did really, really well last game, and something Crabtree has been doing all season.

It allows Cam to break outside and take this run to the house for a 70+ yard touchdown run.

Kaepernick will have a hard time accruing big gains on the ground in most scenarios, thanks to Atlanta's zone defense.

When they blitz however, expect The Kid to break loose for a huge gain.

He'll use those ostrich legs -- stride for stride faster than most anyone in the league -- and do what he did against Green Bay.

Who's got it better than us?

I'll keep up with you guys in the Game Day Thread to see how my bold predictions turn out.